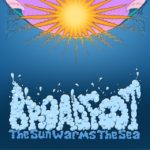 I’ve just had five days of holidaying in Coffs Harbour. The weather wasn’t as nice as I was hoping, but at least it was warmer than Newcastle. One of the unexpected highlights of the trip was at the Coffs Harbourside Markets last Sunday. Visiting markets are not anywhere near the top of my list of favourite things to do, but on this occasion I had the pleasure of sitting down and spending an hour listening to the three piece band “Broadfoot“, who hail from the Mullumbimby area. I had a chance to chat with the guys after their set and buy their CD “The Sun Warms The Sea”. Fantastic.

Example: I was listening to my music in shuffle mode in the car earlier this week when I heard “America” by Simon and Garfunkel, immediately followed by “This is not America” by David Bowie. 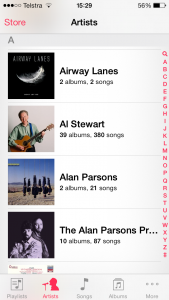 Previously in iOS 6 if I wanted to listen to a particular album by a particular artist I could tap on “artists” and see a list of artists going down the page. In iOS 7 I can still do that, but because of the album art, the screen only shows 4 artists at a time, so it takes a lot more scrolling to find the artist I want. 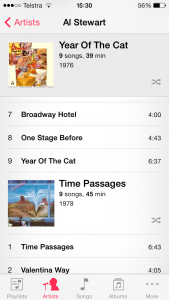 In iOS 6, having opened an artist, I saw a list of albums to choose from. Now in iOS 7 I see a list of every song from every album from that artist, which means that if the album I’m looking for is down the bottom of the list and requires lots of scrolling to get to. 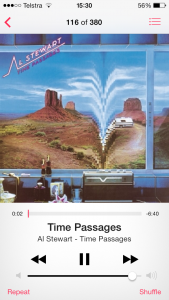 Then, in IOS 7 to play an album I can’t just tap on the album cover or album title (which would seem logical), I have to tap on the first track title, and then instead of playing just that album, the music app enters a playlist of every song by that artist, so that when the album finishes it just goes on to the next album. Also if I turn on shuffle, instead of just shuffling through the tracks on the one album, it will shuffle through all tracks by that artist. 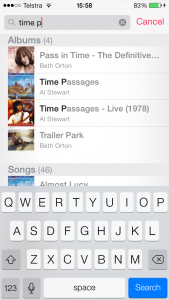 The workaround seems to be, just forget that the Artists view exists, and use the Search bar in the music app to find the album you want to play.

I had a problem today with smart playlists in iTunes with multiple rules not syncing properly with my iPhone 5. Thanks to a tip in an Apple forum I found that the problem was fixed by adding the rule “Playlist–Is–Music” to the smart playlist rules. Bizarre and makes no sense, but it fixed the problem. 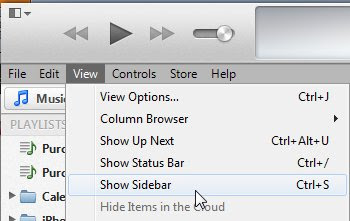 Thanks to a tip from my son, I now know how to return iTunes 11 to more of the iTunes 10 look by showing the sidebar again.

Apple has released iTunes 11 and are loudly proclaiming it as “simpler”, “easier” and “more intuitive. Is it?

No. Just one example in the screenshot below. In iTunes 10 there was one place (the left panel) where you could find everything you wanted (iTunes store, podcast lists, device sync screen, playlists etc.)

In iTunes 11 there are three different spots you have to go to depending on what you want, and then after navigating to that spot there may be additional clicks to get to the view that you want. 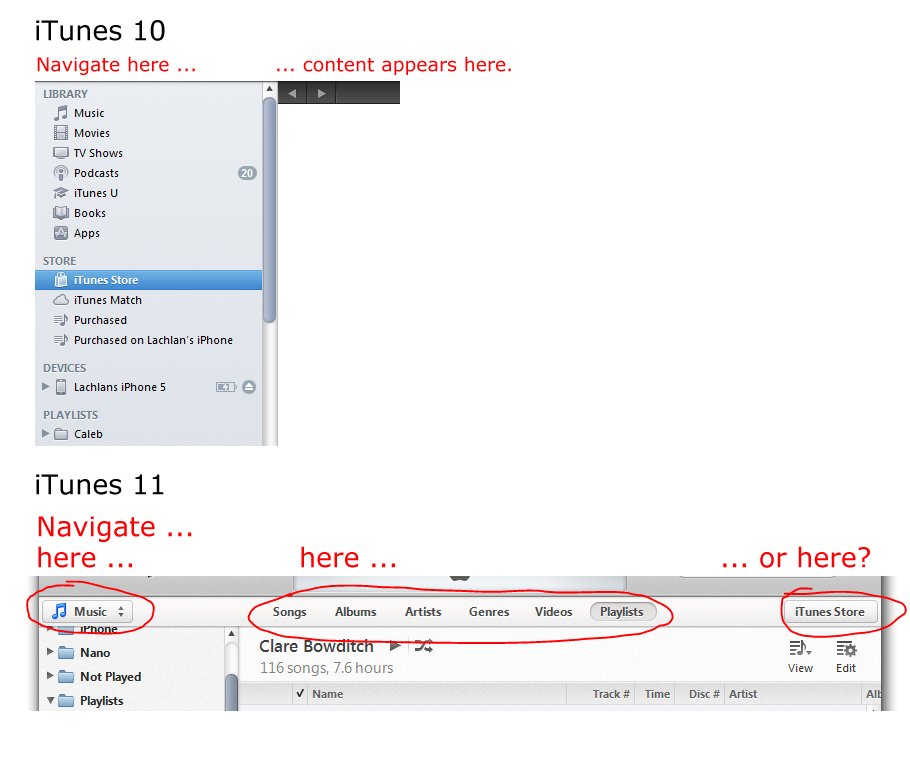 Someone told me that the Spotify music streaming service is now available in Australia and I thought I’d give it a try – BUT it turns out that you must have a Facebook account to sign into Spotify. Ridiculous. Goodbye Spotify.

Update 31 Dec 2012: Just found out that since September Spotify no longer requires Facebook to create an account, so now I can give it a spin.