Mike Scanlon had an interesting history article in the Newcastle Herald this weekend (22 October 2022), on the mystery of the forgotten World War 2 runway at Pokolbin. In 1942 the RAAF built an air station at Pokolbin. The north-south runway was located where the current Cessnock airport is now. But there was also second runway located towards the south-west.

In the article Mike mentions that this old east-west runway can still be seen in Google’s satellite views. Using the historical imagery feature in Google Earth Pro and winding back to 2007, indeed shows a faint yet quite distinct outline of the old runway lying beneath fields and vineyards.

In researching the Leonora Glassworks for my October 2022 article for The Local, I came across this photograph from the Newcastle Morning Herald and Miners’ Advocate on 11 Dec 1948, of Joseph and Milon Vecera posing on the entrance steps of a building that had been demolished.

The newspaper incorrectly identifies the site as “Lambton Lodge”, the home of Thomas Croudace. The location is actually the small building at the left in the photo below, where the steps can be seen at the front. Brian Robert Andrews, on page 230 of his book “Coal, Railways and Mines, Volume 1”, has a diagram of the Lambton Colliery surface infrastructure that identifies this building as the colliery office.

The double story building at the right of the photo is the colliery workshops, where Leonora Glass set up in 1947, where the Vecera twins were working in 1948 when they were photographed on the old colliery office steps.

This black pillar appeared recently adjacent to the Howe St walkway in Lambton Park. Just like the monolith in Kubrick’s “2001: A Space Odyssey”, I have no idea what it’s for.

The replacement of the Lambton pool water slide looks to have been completed this week. 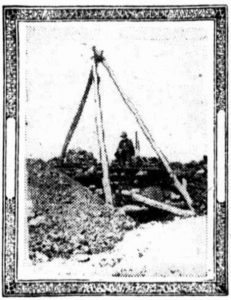 I’m currently researching and writing my next article for The Local, on the subject of the “baby” coal mines of Lambton and Waratah. [Now published here.] These were small operations, involving a few men hewing coal out of primitive shafts and tunnels to be sold directly to householders in the area.

There was great concern in Newcastle in 1922-1923 about the deleterious effects of these unregulated mines on the local environment, with respect to safety, undermining of streets, and damage to water and gas pipes.

In researching this history on the local impact of coal mining I was reminded of the most recent season of the podcast “Australia, If You’re Listening”, on the history of the climate change debate in Australia. Matt Bevan opens the podcast with a quote from the Maitland Mercury in 1912, which shows that concern about the global impact of coal mining has been around for a long time.

“The furnaces of the world are now burning about 2,000,000 tons of coal a year. When this is burned, uniting with oxygen, it, adds about 7,000,000 tons of carbon dioxide to the atmosphere yearly. This tends to make the air a more effective blanket for the earth and to raise its temperature. The effect may be considerable in a few centuries.”

The 7 million tons of carbon dioxide emitted in 1912 from coal is miniscule compared to the 14.8 billion tons of CO2 emitted from the burning of coal in 2021. With this 2000 fold increase in emissions, it won’t be a few centuries before the effect is considerable, it’s here now.

For several years at our church we’ve been using Zoom to live stream our church services, using a Canon digital SLR camera as a webcam connected via an Elgato video capture interface. Recently we started having problems where the video feed would randomly stop during the Zoom meeting. The indicator at the bottom of the screen would show that the video was stopped, and clicking on it would start it again. This would happen at random intervals, sometimes every few minutes.

At first I thought it might have been the length of HDMI cable we were using between the PC and the camera causing an unreliable signal. I tested with the camera located adjacent to the PC with a short HDMI cable and the problem persisted, so it wasn’t the cable.

I checked in the Windows event log and discovered an “Information” message from EOSWebcam was appearing at the same time that the video had been cutting out.

A quick Google revealed that the EOSWebcam utility is software from Canon that allows the camera to be used a webcam by plugging the camera directly into the PC with a USB cable. As we were connecting via HDMI into an Elgato capture device, we didn’t actually need the EOSWebcam driver. After uninstalling it, the problem of the random dropouts of video during our Zoom livestream was solved.

Thanks to Cath Chegwidden and the resources of the Historical Land Records Viewer, I’ve been able to correct a minor error in my Waratah Council page, on the exact location of the final Waratah Town Hall in Hanbury St. Mayfield. It was located where the current Ex Services Club is now, on Lot 8 Sec 2 DP8673.