For several years at our church we’ve been using Zoom to live stream our church services, using a Canon digital SLR camera as a webcam connected via an Elgato video capture interface. Recently we started having problems where the video feed would randomly stop during the Zoom meeting. The indicator at the bottom of the screen would show that the video was stopped, and clicking on it would start it again. This would happen at random intervals, sometimes every few minutes.

At first I thought it might have been the length of HDMI cable we were using between the PC and the camera causing an unreliable signal. I tested with the camera located adjacent to the PC with a short HDMI cable and the problem persisted, so it wasn’t the cable.

I checked in the Windows event log and discovered an “Information” message from EOSWebcam was appearing at the same time that the video had been cutting out.

A quick Google revealed that the EOSWebcam utility is software from Canon that allows the camera to be used a webcam by plugging the camera directly into the PC with a USB cable. As we were connecting via HDMI into an Elgato capture device, we didn’t actually need the EOSWebcam driver. After uninstalling it, the problem of the random dropouts of video during our Zoom livestream was solved.

I’ve been roasting coffee beans at home in a popcorn popper since 2006. I thought I was doing well when I had a popper machine that lasted for 3 years. Today my popcorn popper burned out after 9 years of service, having done over 1100 roasts.

Thankfully I had a spare machine ready in the cupboard to replace this stalwart of roasting goodness.

My Christmas treat to myself this year – one of my favourite things – dipping my feet in a cold mountain stream on a hot summer’s day. 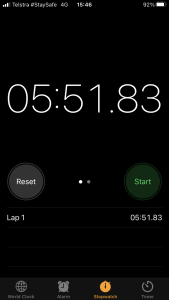 I just got my second AstraZenaca Covid-19 vaccination. Like last time I went to the Raymond Terrace Respiratory Clinic, who once again were super efficient and organised. In my post on the first vaccination I noted that “within 5 minutes of arrival I was in the examination room having the vaccination in the arm.” This time round I decided to justify that observation with stopwatch measurement. From the time I left my car in the parking lot to sitting down in the chair to be vaccinated was 5 minutes 51 seconds! With confirmed Covid cases in Newcastle this week after an absence of a year, that is beautiful timing.

Here’s a graph of the number of kilometres I’ve ridden my bike while commuting to work over the last 12 years. Can you spot where Covid hit?

I’m posting this because today I reached 20,000km of cycling to work.