As a follow up to Night of the Bridge, I went across the new shared path bridge over Newcastle Road at Jesmond today, and recorded a time-lapse video.

Here’s a graph of the number of kilometres I’ve ridden my bike while commuting to work over the last 12 years. Can you spot where Covid hit?

I’m posting this because today I reached 20,000km of cycling to work.

A milestone in the development of shared pedestrian and cycle paths was reached last night, with the placement of the new overhead bridge spanning Newcastle Road at Jesmond. 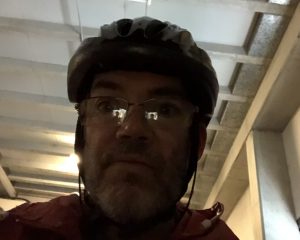 After 11 years of riding my bike to work, today I saw something I’d never seen before – a cyclist being fined by a police officer for not wearing a helmet. (And no, the cyclist wasn’t me.)

The only thing I’m certain of is that anyone who has a firm opinion one way or the other hasn’t understood or thought about the complexities of the issue enough.

For myself, if helmet wearing was optional, I’d still choose to wear a helmet. As for whether it should be compulsory, I lean towards it being compulsory, but the fine for not wearing a helmet (in NSW) needs to be much lower. The current fine of $319 is egregiously disproportionate to the offence, when you consider that the fine for a motorist using a phone while driving, which is substantially more dangerous in its potential consequences to other people, is about the same at $337.

My ride to work this morning was aborted by this little tack that I picked up while riding on the bike path alongside Ford Oval in New Lambton. I hope this is just a random bit of debris and not some idiot deliberately having a go at cyclists.

This week marks 10 years since I first cycled to work, in January 2009. For that first year I set myself a modest target of cycling to work at least 20% of the time. Over the last decade I’ve ramped up the target, and in 2018 I achieved a rate of 94.5% of trips to work on the bike.

Facebook and Donald Trump brought fake news to the world, but I’m increasingly seeing fake views in the the newspapers, particularly in the letters to the editor.

I quite understand and support the idea that the letters page is a place where readers can express their opinions and argue their case, and that often those opinions will vary from my own views. But I find it quite depressing how regularly these views veer from opinion, to the expression of demonstrable factual errors and untruths.

“The intersection at Ridge and Mitchell St Merewether has a four-way intersection with four stop signs, close proximity to a school bus stop and shops”.

The cyclists appear to think these signs are only for cars, but not for them. Red lights are also a special, blatant disrespect for the law.

If an accident were to occur, I bet it wouldn’t be their fault.

Note the progression from fact, to opinion, to absurd nonsense. If a road user (motorist or cyclist) breaks the road rules and causes an accident, they are clearly at fault, and the law clearly states so. Is the writer seriously suggesting that if a cyclist ignores the road rules and causes an accident the police or the courts will just let them off because they are a cyclist?

It’s not only the letters where fake views appear but the opinion articles also, where the writers seem to think that ‘opinion’ means a licence to state untruths. A particularly egregious example is Robert Montheath’s article on electricity and renewable energy on 29 September 2017 where he says that because …

This would only be true if there was no such thing as stored energy. But battery storage or pumped hydro schemes means that it is absolutely possible for solar energy to provide all our electricity needs. It is a matter of opinion whether it is desirable, or how cost effective it would be, or how soon it could be achieved, but it is a matter of fact that it is possible.

People, please don’t poison your opinions by mixing them with untruths.