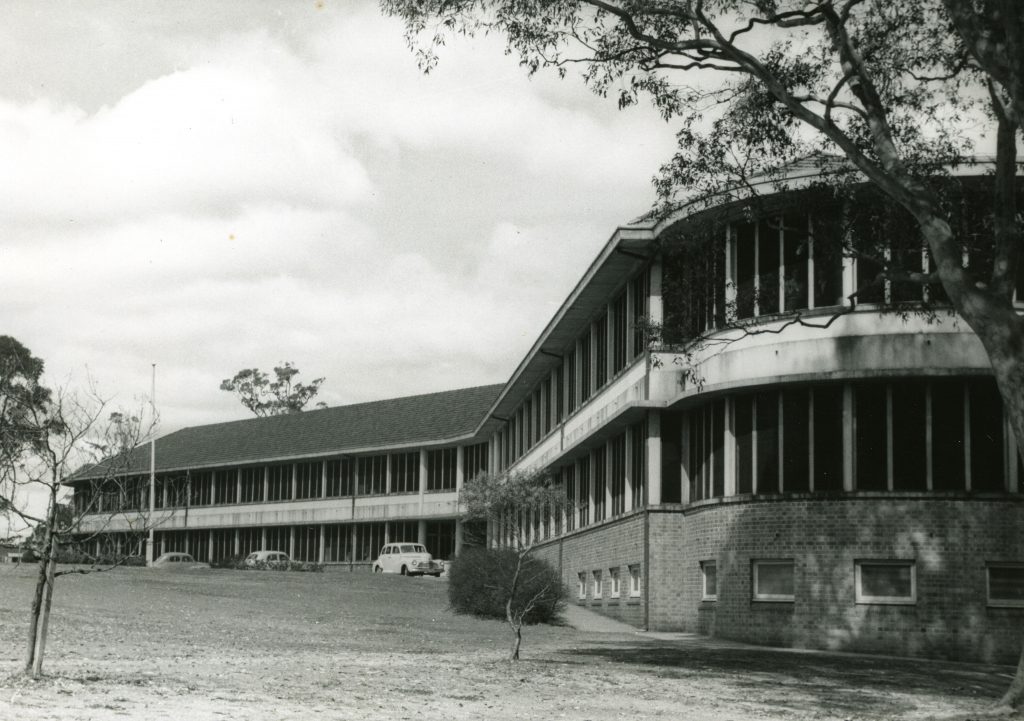 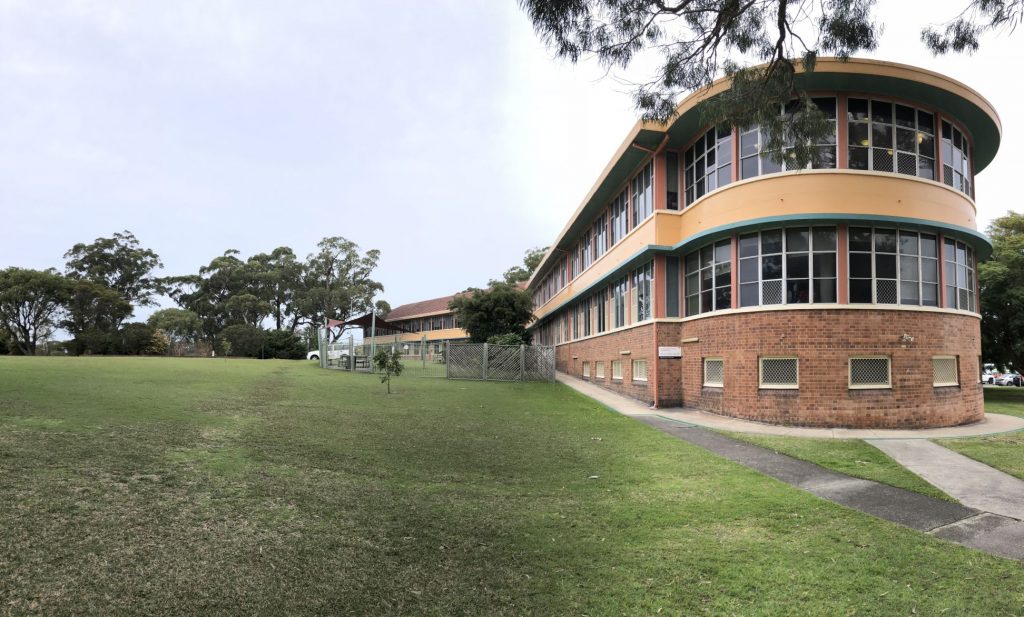 The University of Newcastle Cultural Collections site has a Ralph Snowball photo with the caption “Construction of the water reservoir, New Lambton, NSW 1917”. In tracking down the location of this photo, thanks to Robert Watson I somewhat surprisingly ended up in a different suburb and a different year. 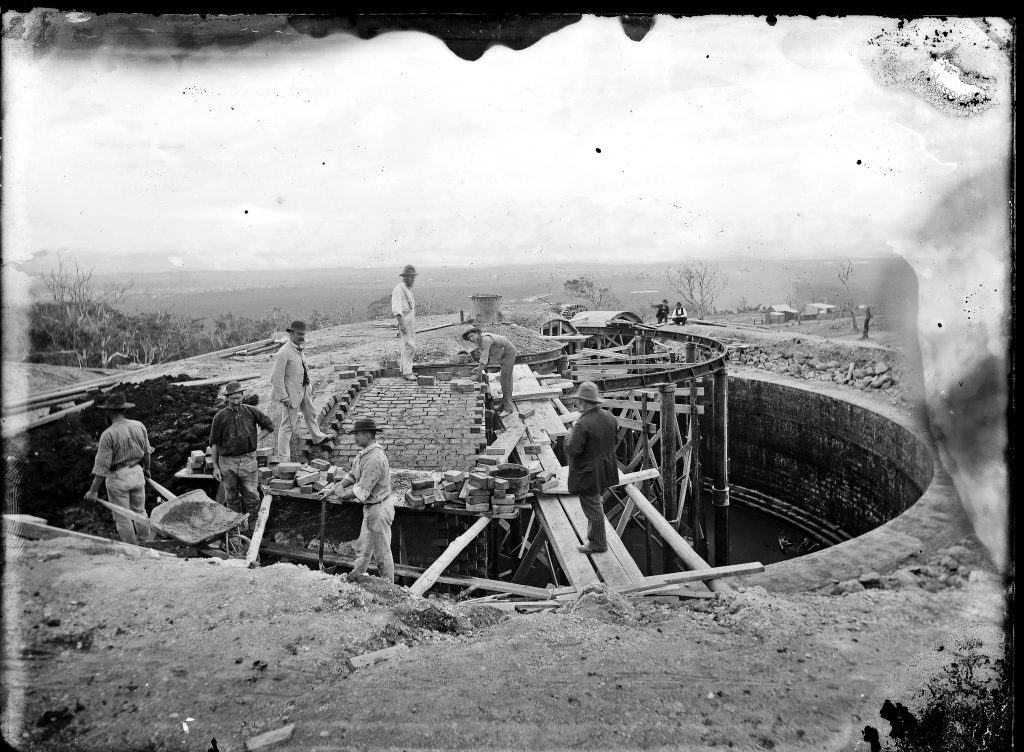 Given that the photo is taken from an elevated position overlooking a flat plain I had always assumed that the location was where the reservoir now is at the top of Ridgeway Road, New Lambton Heights. 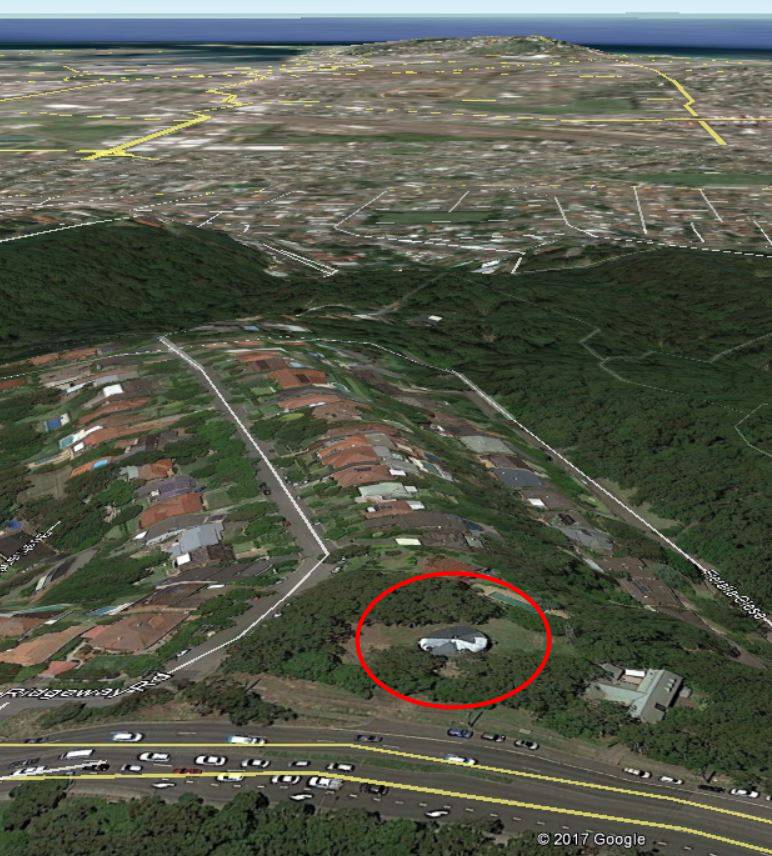 A search of Trove appeared to confirm my assumption, with a 9th January 1917 newspaper article reporting that

“The construction of the New Lambton reservoir was completed on the 3rd instant, and after satisfactory tests were made the reservoir was brought into use.”

Further investigation however cast serious doubt on this being the site of the Snowball photo, for none of the other details matched up.

Visiting the site of the Ridgeway Rd reservoir revealed that the 50,000 gallon 1917 reservoir is still there, covered in ivy, beside the new 1954 steel reservoir. It is clearly not the reservoir in the Snowball photo. 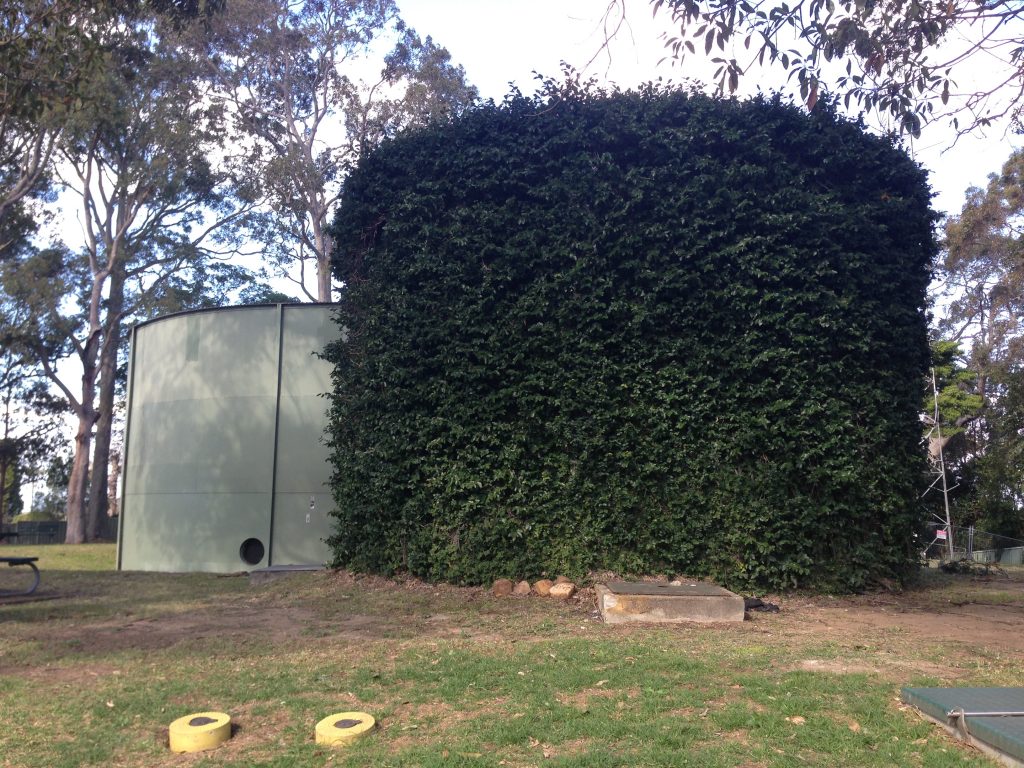 On the horizon of the Snowball photo there is a very faint outline that appeared to me to be the outline of Shepherd’s Hill on the coast. What other reservoirs on the hills around the Newcastle would provide a view eastwards over the flatlands towards the coast?

A 1940 map of Newcastle shows reservoir locations as small blue circles. Having ruled out the Ridgeway Rd site [1], I then considered Lambton Reservoir [2], St James Rd Reservoir [3], and Lookout Reservoir [4]. 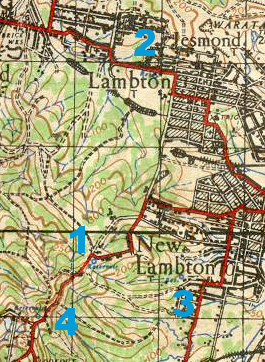 Lambton Reservoir was built in 1885 and sits in the middle of Newcastle Road at the top of the hill. 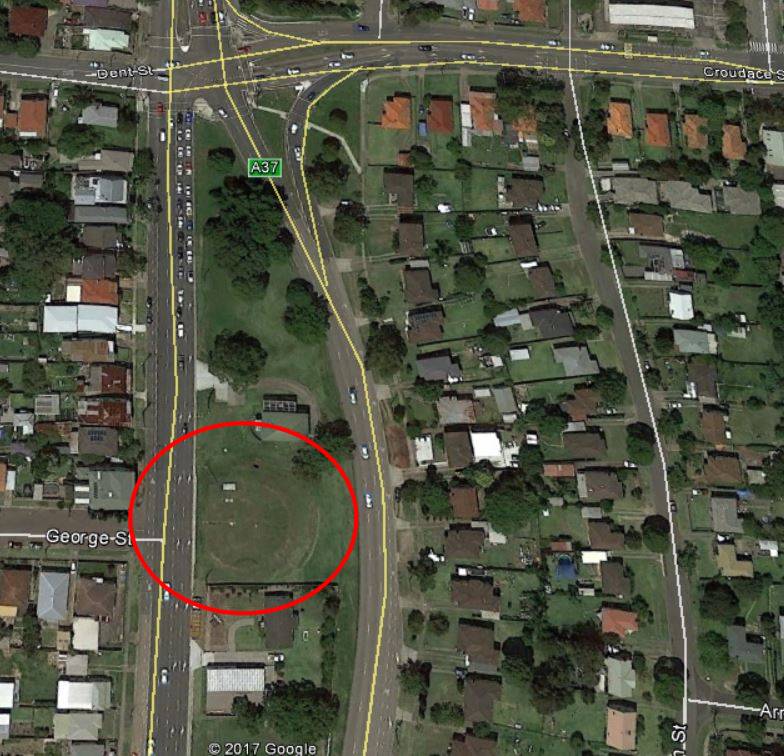 Interestingly, a drawing of the Lambton Reservoir shows that it is the same design as the reservoir in the Snowball photo, with a central dome and two concentric rings of arches to form the roof.

But despite the similarity of design, the topography of the land in the photo doesn’t match. If the photo was of Lambton Reservoir we would expect to see the township of Lambton (including the very prominent Post and Telegraph Office building) before us.

The reservoir (marked 3 in the map above) in New Lambton, between St James Rd and Queens Rd was built soon after August 1926. It didn’t seem to match up too well with the shape of the land in the Snowball photo – the St James Rd reservoir appears to have a slight ridge to its right, which is absent in the old photo. Also in 1926 we would expect to see the growing suburb of New Lambton below the reservoir, instead of the large expanse of scrub land that we do see.

The reservoir marked 4 on the map above was known as the Lookout Reservoir. It also was constructed on 1926, and its location can still be seen in the empty circular space between the two newer above ground steel reservoirs. 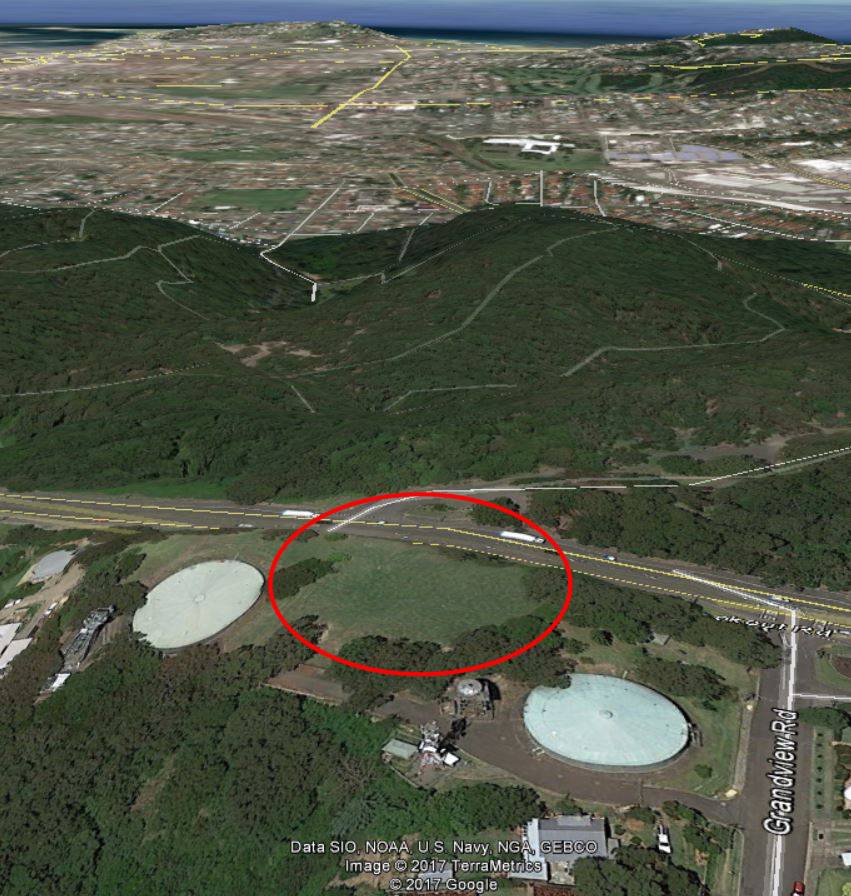 At this point, Robert Watson came to my aid, and with some inspired thinking rescued me from my impossible conclusion. He deduced that the reservoir in the Snowball photo is actually situated in Macquarie St, Merewether. 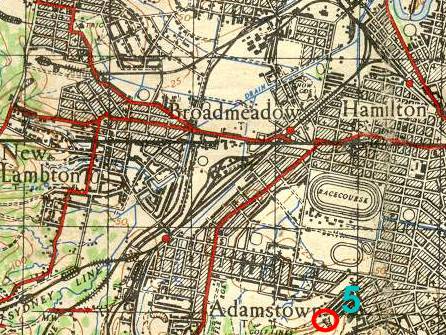 Location of Glebe Hill reservoir on the 1940 map.

I had led myself astray in too quickly assuming that the Snowball photo was looking east towards the coast. It is in fact looking north-west, across the Broadmeadow flatlands towards Waratah. 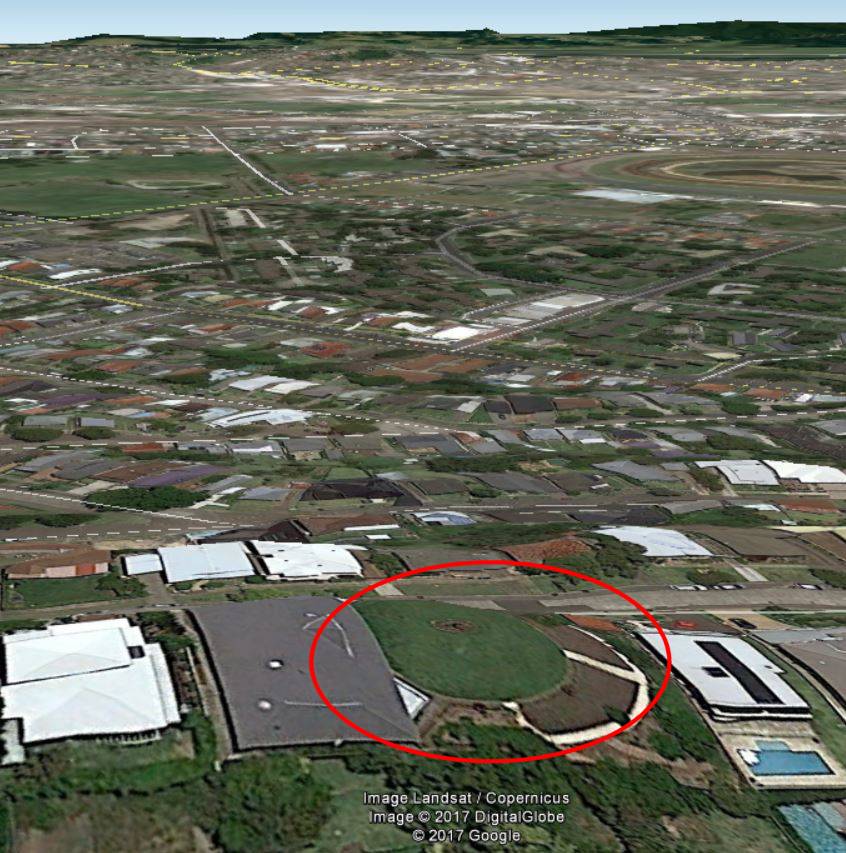 Panorama from the site of the Glebe Hill reservoir. 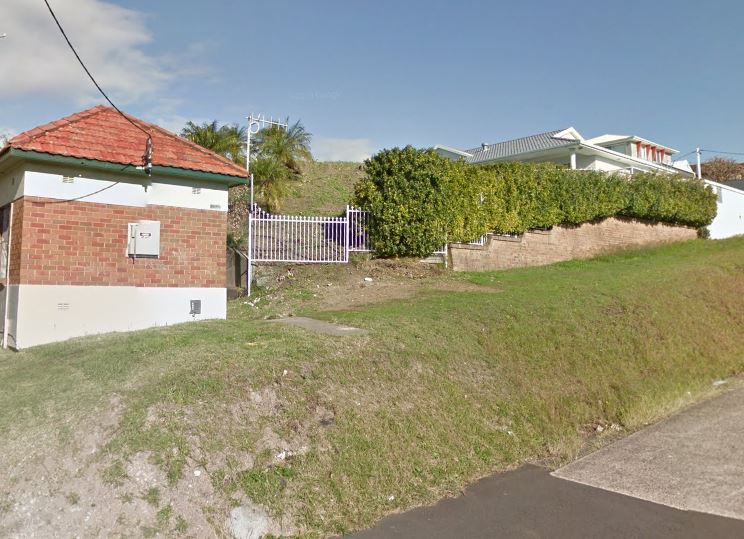 A newspaper article from May 1886 states that the construction of the reservoir began in November 1885, only three months after the Lambton reservoir was completed in August 1885. The article contains a detailed description of the design that matches the photo very closely.

The roof is formed of two concentric arched rings and a dome carried by cast-iron girders, supported by iron columns resting on stone foundations some two feet square.

A March 1887 article describing the Hunter River District Water Supply shows that the Glebe Hill reservoir was almost identical to the size to the Lambton reservoir.

The reservoir at Lambton is built on the hill above the Public school, a distance of twelve and a half miles from. Buttai. It will hold 402,600 gallons. At fifteen and a third miles from Buttai a 15-inch branch pipe, a mile and a quarter in length, is connected with a reservoir having a capacity of 403,000 gallons, to supply Hamilton, Adamstown, the Glebe, and other towns along the line.

Note that although the reservoir is located within the modern day suburb boundaries of Merewether, it is sometimes called the “Hamilton Reservoir”, as that was the principal township it served.
Some other hints that confirm that the Snowball photo is of the Glebe Hill reservoir are the faint outline of smoke stacks in the distance. At the right are two stacks of different size, close together. 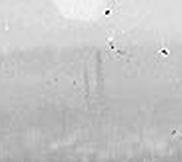 These are the stacks of the English and Australia Copper Company smelter at Broadmeadow. 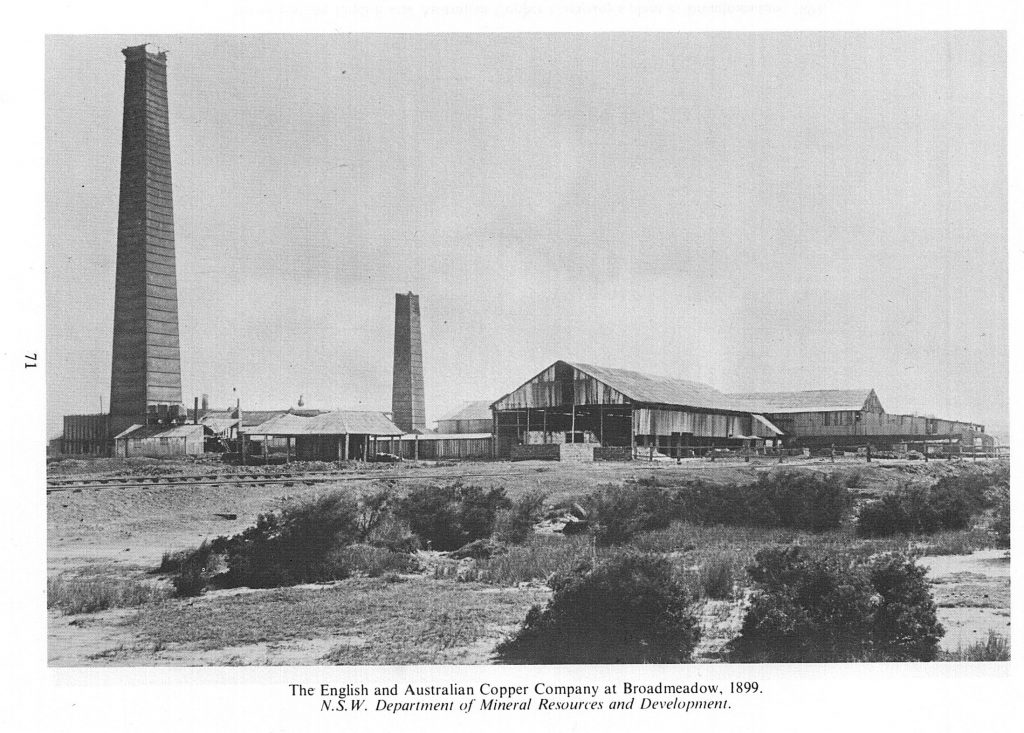 To the right is a single stack of one of the A.A. Company pits in Hamilton, and the very faint outline of the roof of St Peters Church in Denison St, Hamilton.

The Glebe Hill reservoir photo is taken from a spot only about 400 metres away from another Ralph Snowball photo taken in 1897, which shows the same landmarks in the distance. 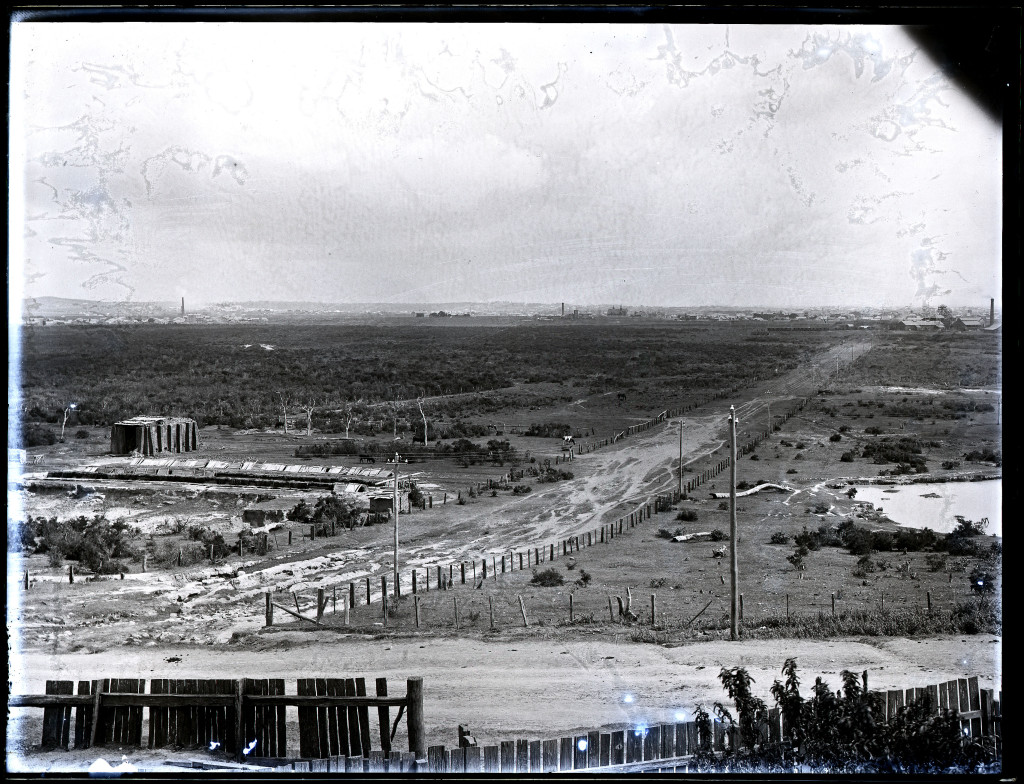 The Glebe Hill reservoir is marked on Corporal Barrett’s 1910 map of Newcastle, situated on Lake Macquarie Rd. Quite possibly the two buildings marked at the end of Henry St are the two buildings we see in the Snowball photograph. 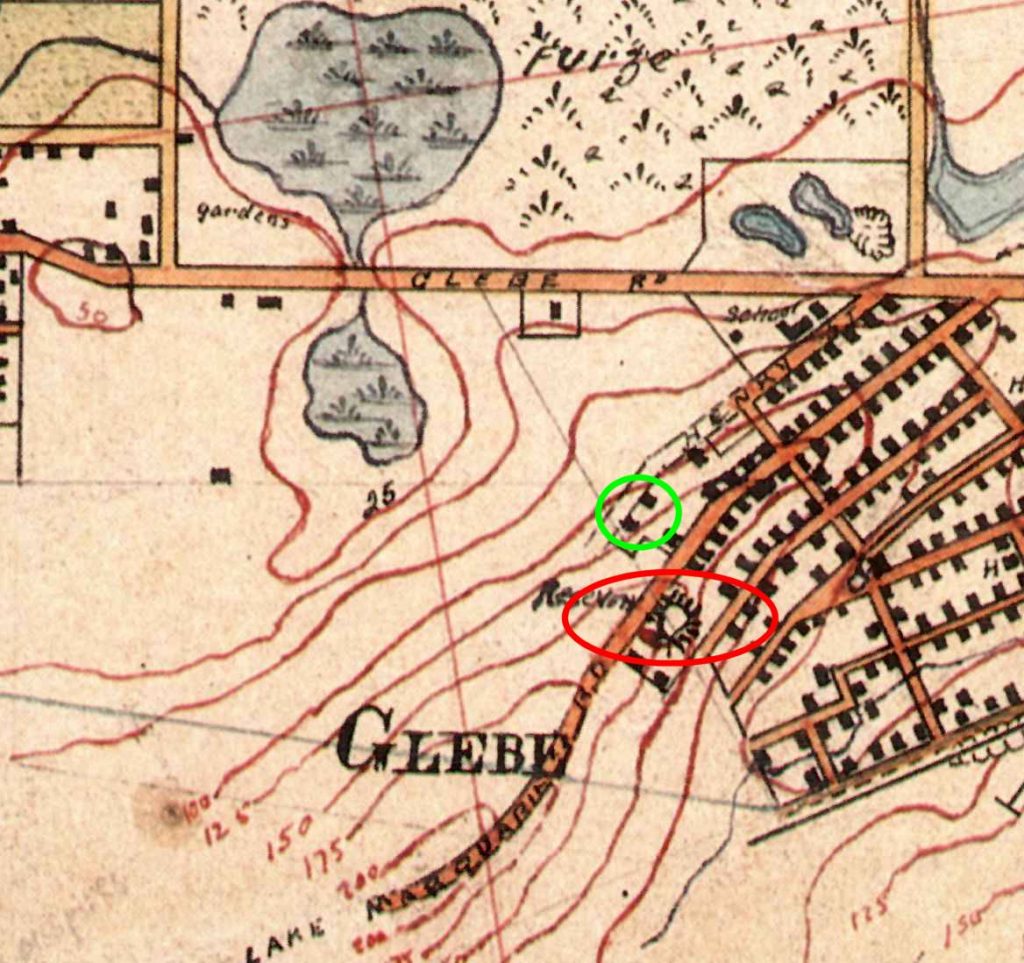 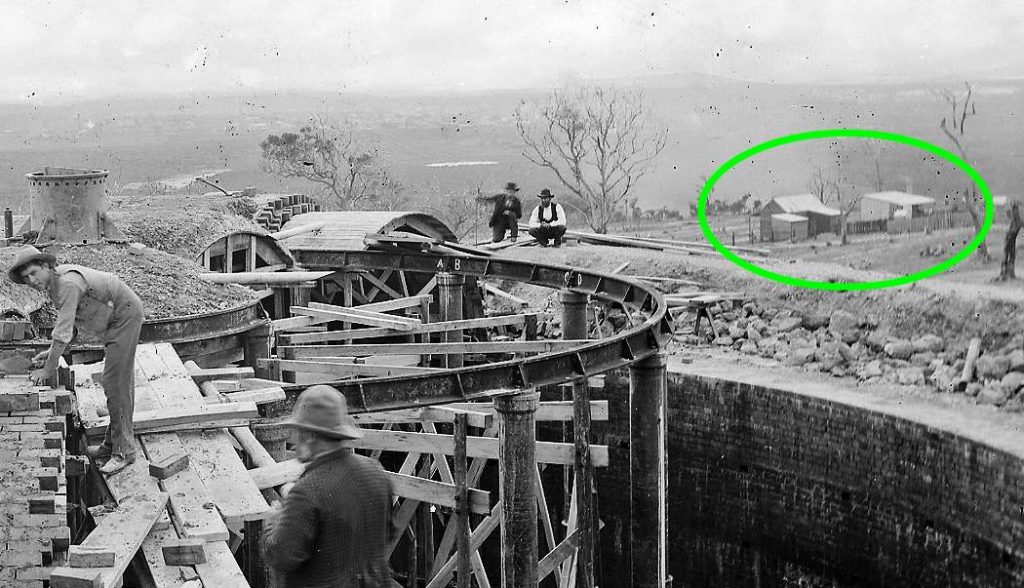 My thanks to Robert Watson who had a substantial input into the content of this article. Thanks also to Brendan Berghout of Hunter Water, who pointed me towards some useful information on early water supply infrastructure, and who helpfully reminded me that imperial gallons (220 gallons/m3) are not the same as U.S. gallons (264 gallons/m3). It was a casual conversation with Brendan on a bicycle commute to work one morning that was the genesis of this journey of discovery. 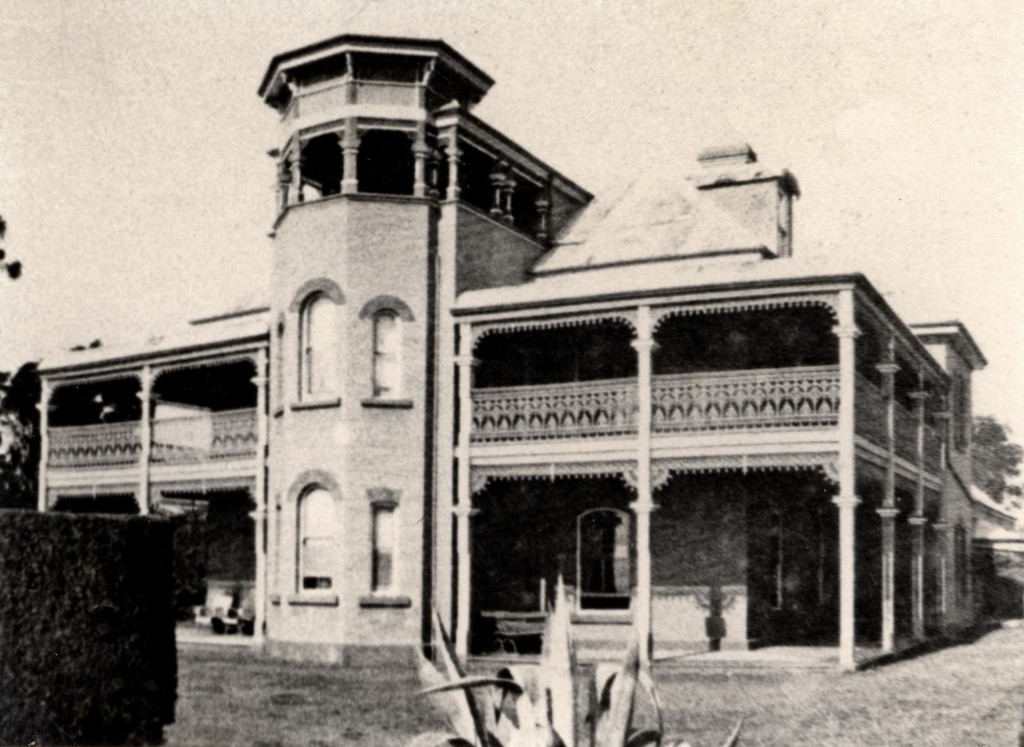 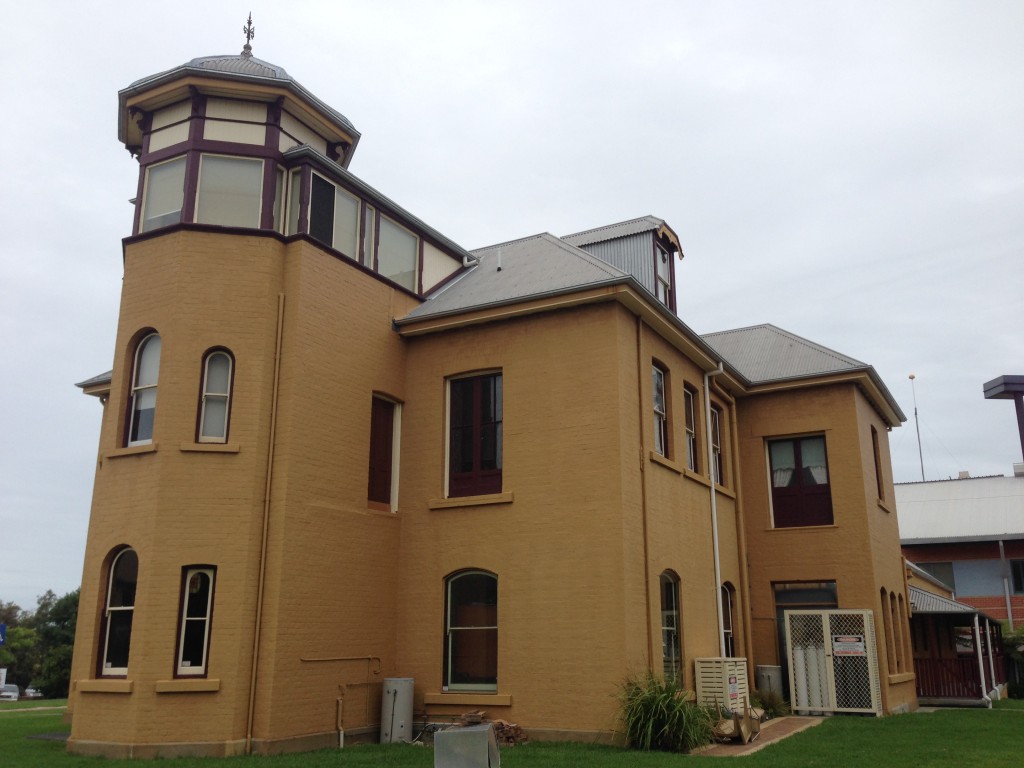 I recently had cause to ride my bicycle to John Hunter Hospital, and beforehand tried to find out on the web where, if anywhere, there was bicycle parking at the hospital. I failed to find any information on the web, but on arriving at the hospital did eventually locate a bike parking area. So for the benefit of other cyclists …

A bicycle parking area is located outside the ticket booth at the exit of the main carpark. It is undercover and has the added security benefit that for most of the day there’s someone in the ticket booth, which makes theft of the bike less likely. 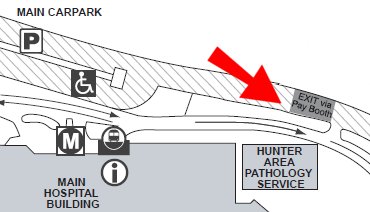 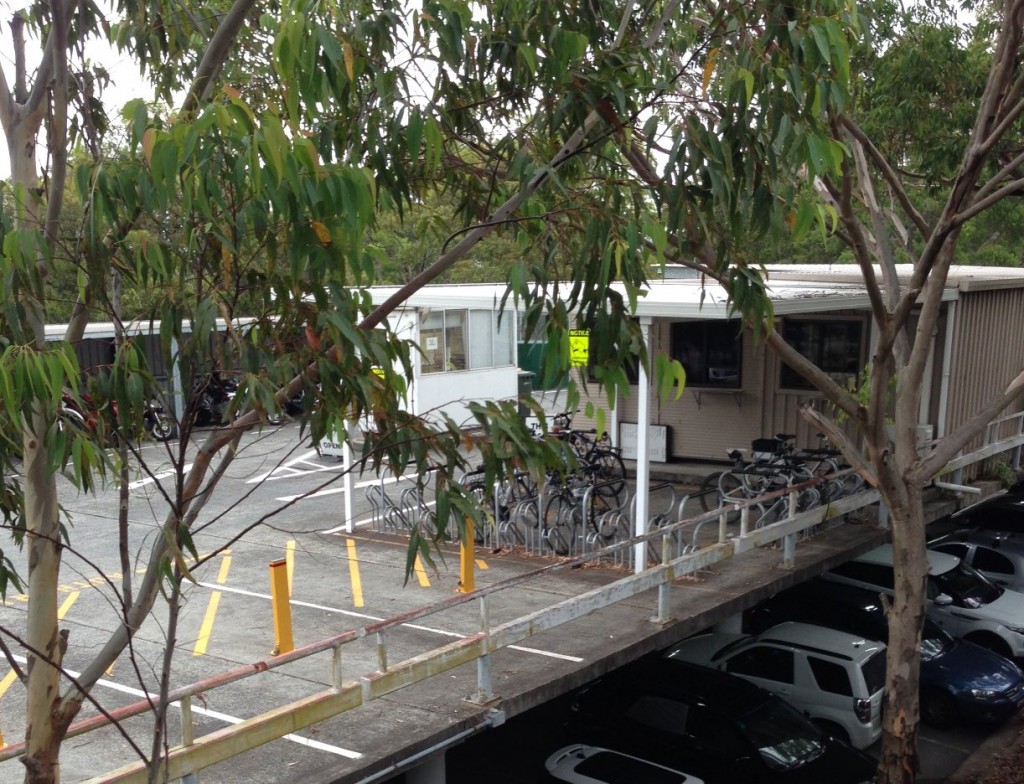