A new year, a new decade (or not, depending on how pedantic you want to be.) 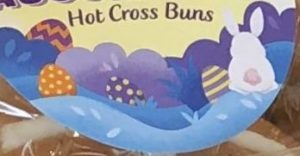 But for Coles, it seems the 1st of January is the perfect time to start selling hot cross buns in readiness for Easter. Hop to it and don’t leave it too late to buy them – Easter’s only three and half months away! 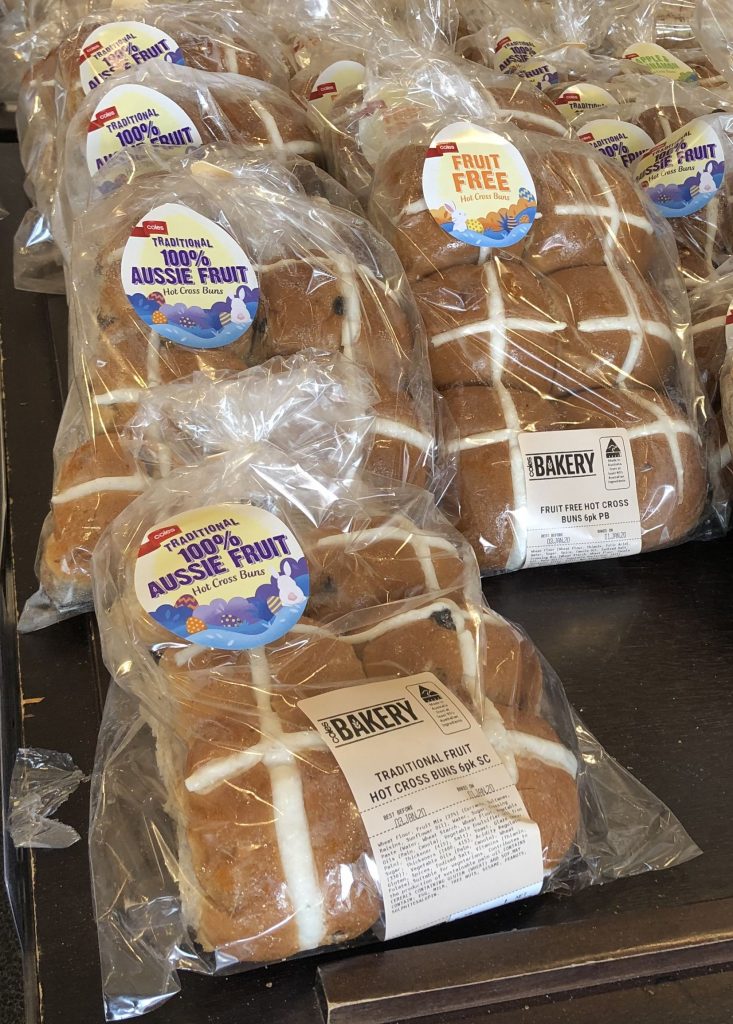 I get some amusement by pondering that somewhere in the world, there is someone whose job is to come up with names for new prescription drugs. Of course there a few basic rules in naming a new drug …

But the most important rule of all is …

To illustrate my point, click on the button below to show an actual Doctor Who episode title, with one word substituted for an actual prescription medication sold in Australia. Doctor Who fans can try to guess the real title. 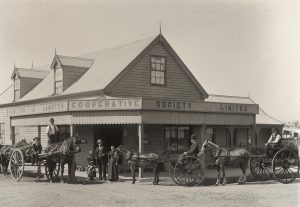 My September article for “The Local” is now out, this month on Lawson Crichton, manager of the Lambton Cooperative Society Store.

One interesting side discovery from researching this article came from Ralph Snowball’s 1898 photo of the Cooperative Store, where I noticed that one of the advertisements on the front wall of the store was for a product called “Bile Beans For Biliousness”.

Bile Beans was a completely fraudulent product created by Charles Edward Fulford and Ernest Albert Gilbert, and first sold in Australia in 1897. The product was a relatively harmless concoction of plant and vegetable matter, but was heavily marketed with pseudo-scientific attestations as a cure for all kinds of maladies, including constipation, indigestion, rheumatism, influenza, and anaemia.

“Slenderness can be yours without dieting or fatiguing exercise if you just take Bile Beans. Just a couple nightly and you’ll slim while you sleep.” 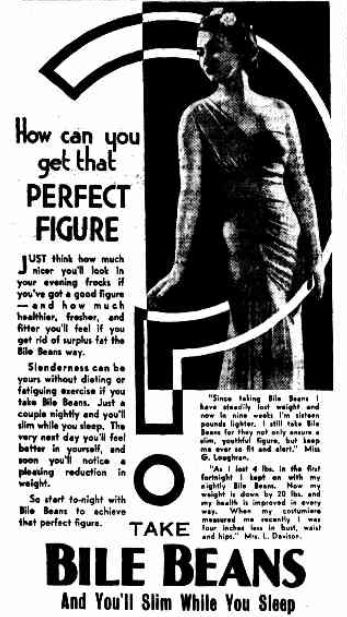 Thankfully the marketing of ineffective weight loss solutions using pseudo-scientific claims of efficacy, gushing about the natural origins of the ingredients, and targeting women with insecurities about their body image – that could never happen in our modern day and age, could it?

It’s Martian Day. But I don’t feel like celebrating. It was 200 years ago today that the Martians arrived. For decades humanity had been sending probes to Mars and speculating about the possibility of life there. But until they arrived here we had no inkling of their existence. For millennia they had lived underground out of human sight.

Today, Australians earn less money, die earlier, and are imprisoned more often than the Martians. People are divided as to why that is, and what the fix is, but the facts are clear. The gap between Australians and Martians is indisputable.

Its not all bad though. The Martian did bring good things like the cyber-empathic drug “Thoughtfuline”. They put it into the water supply and it makes people think and consider before posting to social media. Amazing stuff.

Yes, there are lots of good things about Novomarsia, even things that are worth celebrating together. But just not on this day. Not on the day the Martians arrived and changed everything for the Australians.

Letter writers to the Newcastle Herald beware – they will without notice or care, edit and butcher your words when they publish your correspondence.

I’ve had four letters to the Herald published recently. Each time they have altered my words in some way, and in no case told me beforehand they were doing so. Up to now the changes they made ranged from inconsequential to mildly annoying, but this last time really got up my nose. On 6 June 2018 Brad Hill wrote:

FOOD for thought: a wind turbine will never produce as much energy in its lifetime as was used in building it. The mind boggles doesn’t it.

Now this might be true for a little wind turbine you buy from a hobbyist store to put up in your garden to power your electric gnomes, but for industrial scale electricity generation this is just mythical nonsense. (See for example a 2014 US life cycle study that shows that for a 2MW generator, the payback period is just 5 to 7 months.) Not wanting to just let this error go unchallenged, I wrote a carefully crafted, short 36 word letter to the Herald in which I wanted to make three points:

I submitted the following letter …

Brad Hill is right. My mind definitely boggles when I see published in the newspaper outlandish and unsubstantiated claims such as a wind turbine consumes more energy in its manufacture than it generates in its lifetime.

… but in spite of my brevity, the Herald saw fit to strip out two of my main points and on 8 June 2018 print this instead …

BRAD Hill is right. My mind definitely boggles when I see outlandish claims on the letters page, such as that a wind turbine consumes more energy in its manufacture than it generates in its lifetime.

I wrote to the Herald expressing my disappointment in how they had edited my letter and significantly altered my meaning, but they haven’t even bothered to reply.  It seems patently clear that the letters’ editor has no interest in truth, only in controversy.

Facebook and Donald Trump brought fake news to the world, but I’m increasingly seeing fake views in the the newspapers, particularly in the letters to the editor.

I quite understand and support the idea that the letters page is a place where readers can express their opinions and argue their case, and that often those opinions will vary from my own views. But I find it quite depressing how regularly these views veer from opinion, to the expression of demonstrable factual errors and untruths.

“The intersection at Ridge and Mitchell St Merewether has a four-way intersection with four stop signs, close proximity to a school bus stop and shops”.

The cyclists appear to think these signs are only for cars, but not for them. Red lights are also a special, blatant disrespect for the law.

If an accident were to occur, I bet it wouldn’t be their fault.

Note the progression from fact, to opinion, to absurd nonsense. If a road user (motorist or cyclist) breaks the road rules and causes an accident, they are clearly at fault, and the law clearly states so. Is the writer seriously suggesting that if a cyclist ignores the road rules and causes an accident the police or the courts will just let them off because they are a cyclist?

It’s not only the letters where fake views appear but the opinion articles also, where the writers seem to think that ‘opinion’ means a licence to state untruths. A particularly egregious example is Robert Montheath’s article on electricity and renewable energy on 29 September 2017 where he says that because …

This would only be true if there was no such thing as stored energy. But battery storage or pumped hydro schemes means that it is absolutely possible for solar energy to provide all our electricity needs. It is a matter of opinion whether it is desirable, or how cost effective it would be, or how soon it could be achieved, but it is a matter of fact that it is possible.

People, please don’t poison your opinions by mixing them with untruths. 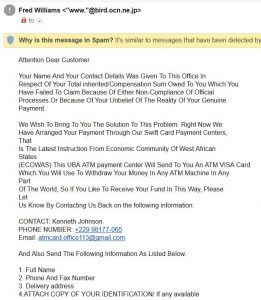 Occasionally I open up one of the  e-mails that Google files away in my Spam folder, just to see what’s on offer. This one made me laugh, several times.

Firstly with its claim that “Your Name And Your Contact Details Was Given To This Office”, yet the e-mail is addressed to “Dear Customer” and then goes on to ask me to supply them with my name and contact details and identification documents!

But the biggest laugh is the assertion that my $7.5m USD is sitting unclaimed “Because Of Your Unbelief Of The Reality Of Your Genuine Payment”. Its funny because its true.

Tim Simona is suffering from a drug and gambling addiction, and the NRL has quite rightly deregistered him from playing rugby league.

But the hypocrisy of the NRL is almost excruciating, as it remains silent on its own gambling addiction.

King of the culprits in this infamous list is the Manly Sea Eagles, who, in a move that is in equal parts pernicious and embarrassing, renamed their home ground from “Brookvale Oval” to “Lottoland”.

In 1992 the Tobacco Advertising Prohibition Act was passed to ban the tobacco industry from sponsoring sport. It’s time that similar legislation is enacted to rid our sporting landscape of the scourge of gambling advertising.