The installation of traffic lights at the intersection of Durham and Hobart Roads marks a new phase for this fascinating microcosm of suburban transport history.

In 1863 Lambton colliery built a rail line to carry their coal to port. No locomotives were used at first, loaded wagons were simply rolled down the track under the control of a brakesman, and empty wagons were hauled back up by horse teams.

In 1868 with the establishment of New Lambton, a rough path was formed from Lambton, a road described at the time as

“being about as bad a one as there is in the whole district”.

The poor state of roads led to a concerted push for a decent main road into town, and as an incentive for the government to choose a route passing through New Lambton, the Lambton colliery offered to build a bridge for their rail line to pass over the main road. This offer was accepted and a rail bridge over Howe St was erected in 1876.

In 1887 the Wallsend tramway was built, and with insufficient space under the existing bridge, a second bridge was constructed for the trams. Originally just a single track, in 1911 the tram line was duplicated from Newcastle to the New Lambton side of the rail bridges. In 1926 with the change from steam to electric trams, the tracks were duplicated all the way to Wallsend, however there was insufficient width under the rail bridge to fit two tram tracks. Instead, a short section of ‘gauntlet track’ was laid under the bridge, where the outbound and inbound tram tracks interleaved without connecting.

In 1949 the tram line closed, the rails were removed, and the tramway became a road for vehicular traffic, including buses. In 1957 Hobart Road underneath the rail bridge was excavated and lowered to allow double decker buses to pass through. Coal trains continued to use the bridges until November 1963, and in 1966 the bridges were removed. 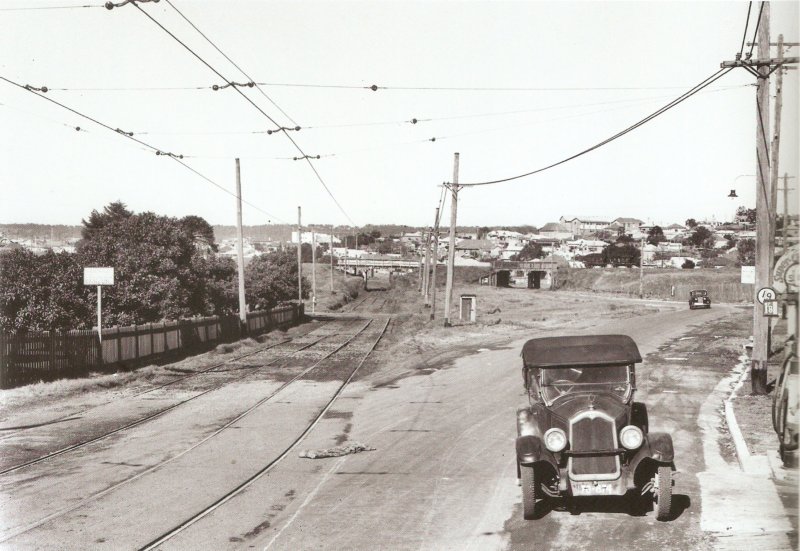 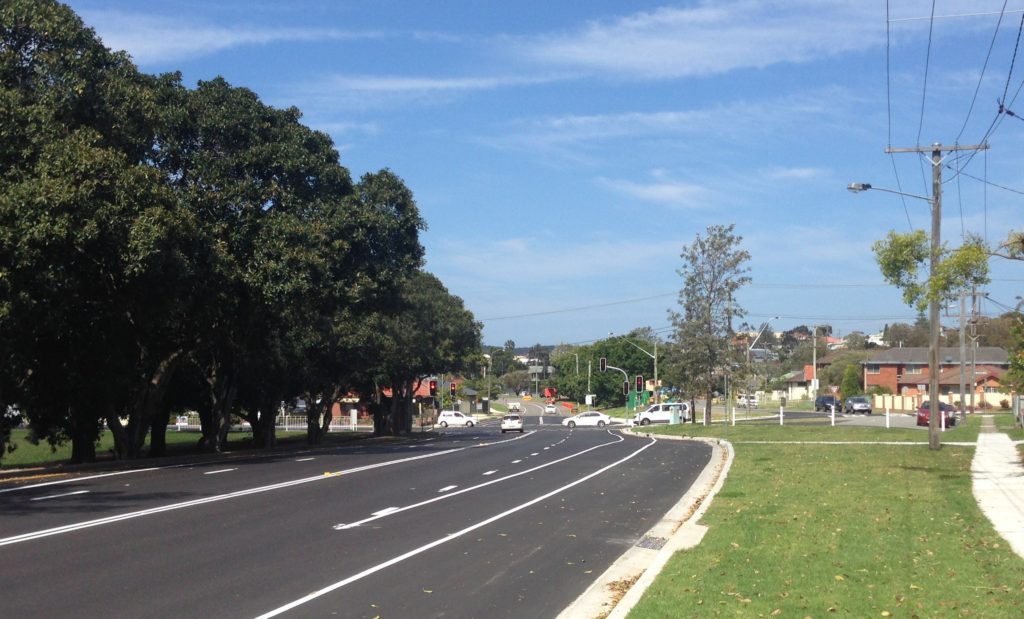 The article above was first published in the October 2016 edition of the Lambton Local.

The colliery railway was constructed in 1863, following the passage of Morehead and Young’s Railway Act on 9th December 1862.

An article in the September (155) and October (156) editions of the “Australian Railway Historical Society Bulletin” by G.H. Eardley is a wealth of information regarding the colliery railway. Newcastle Region Local Studies section has a copy of this article. (LHQ385/PAM)  In regard to the haulage of coal along the track in the early days the article states on page 88 that it was

“… the intention of the Scottish Australian Coal Mining Company to work its railway with its own locomotive power, and presumably, owing to the failure of the exchange siding scheme, it was decided to arrange for Government locomotives to haul the coal traffic. However the comparatively small amount of coal obtained at the commencement of operations did not warrant the expense involved in this system of through running. Consequently arrangements were made to gravitate the loaded coal waggons, under the control of brakesmen, downhill to the Waratah Junction, from whence they were conveyed by the Government engines to the shipping cranes. The empty waggons, on being returned to the Waratah Junction, were hauled back to the colliery by horse teams. This old and primitive system of working the Lambton Railway was abandoned when the increased output of coal warranted the use of Government engines over the line.”

When the main road to Newcastle was being constructed in 1876, Lambton colliery actually constructed two bridges over the main road. One bridge carried the colliery rail line, and it remained in place until 1964 or 1965. The other bridge was for a tramway to cart coal in skips from the Commonage Tunnel coal workings. I am uncertain exactly where the commonage tunnel was located. The minutes of a Lambton Council meeting in October 1886 refers to the road under the tramway bridge as being “within our municipality.” As the colliery railway was the boundary between Lambton and New Lambton Councils, the tramway bridge must have been situated to the north of the rail bridge. As Lambton Park was already in existence (although not yet officially gazetted) by 1886, it would seem that the tramway bridge crossed the main road somewhere between Durham Rd and Tyrone Rd.

Its not entirely clear when the tramway bridge was actually removed, however the language in a newspaper article a year later in November 1887 referring to the “surplus earth on the old commonage tunnel tram-line”, is suggestive that the tramway bridge is no longer there, only the earthen abutments.

The Newcastle to Wallsend tram line

The Newcastle to Wallsend tram line opened 19th July 1887. The portion of a map from a 1906 real estate poster below shows the tram line running south down Howe St and under the coal railway, and continuing in a south easterly direction along the present route of Hobart Rd. On the corner of Railway Rd and Lambton Rd is a block marked “J.W. Oldham”. This is presumably the site of “Mr. Oldhams butcher’s shop” mentioned in an 1887 newspaper article calling for a tram stop near this location. 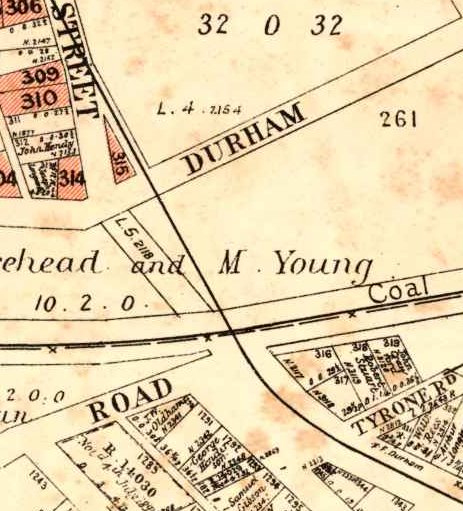 A 1906 map showing the Wallsend tram line running through Howe St and under the coal railway. University of Newcastle, Cultural Collections.

Duplication of the tram tracks

In 1911 the tram line was duplicated from Newcastle to the New Lambton side of the rail bridges. The duplicated track was put into service on Tuesday 11th July 1911. There are a couple of excellent Ralph Snowball photographs showing the construction of the duplicate track. 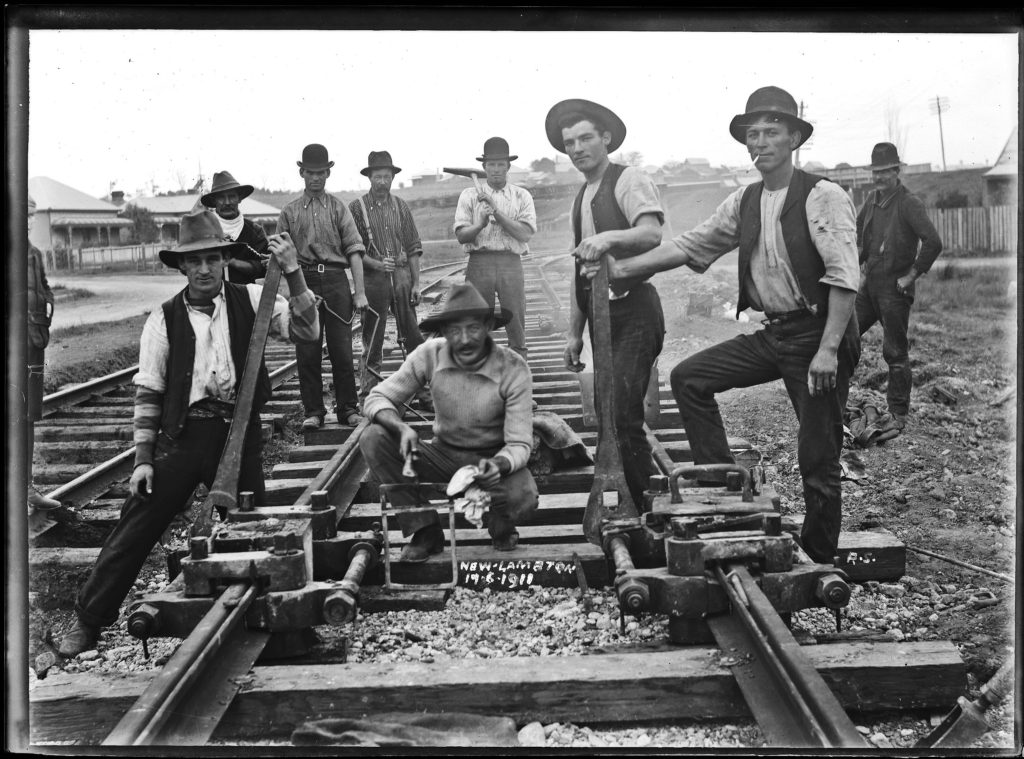 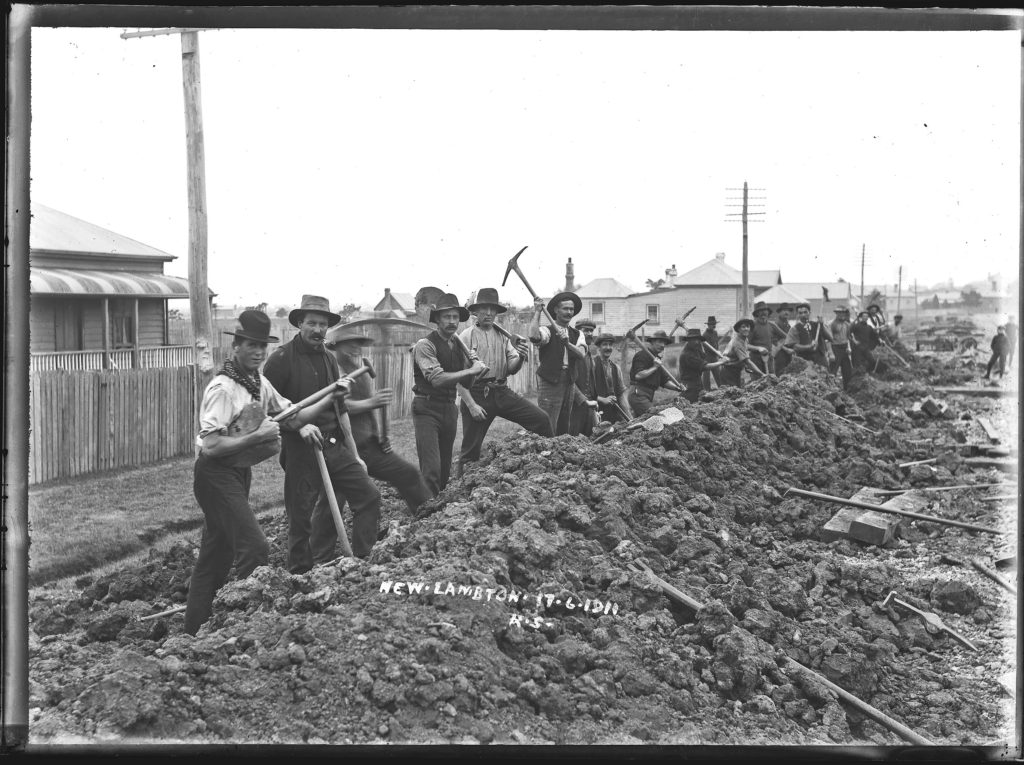 When the tram tracks were duplicated, there was insufficient space under the colliery bridge to lay two tram tracks side by side. To avoid the substantial cost of bridge modifications, a section of gauntlet track was used instead. Gauntlet track is where two separate tracks interleave but without connecting together. This arrangement allows for two separate and continuous tracks to be used without needing points or switches.

To ensure that only one tram at a time used the gauntlet track, a “staff” safeworking system for single lines was used. Tram drivers had to fetch a physical object (presumably a wooden staff) from a cabinet before proceeding through the gauntlet section, and then returning the staff to the cabinet.

Pages 10-17 of the June 1975 edition of “Trolley Wire” (the Journal of Australian Transport Museums) has an article on Newcastle’s tramways, including a photograph of the gauntlet track taken from the Hobart St coal railway bridge. 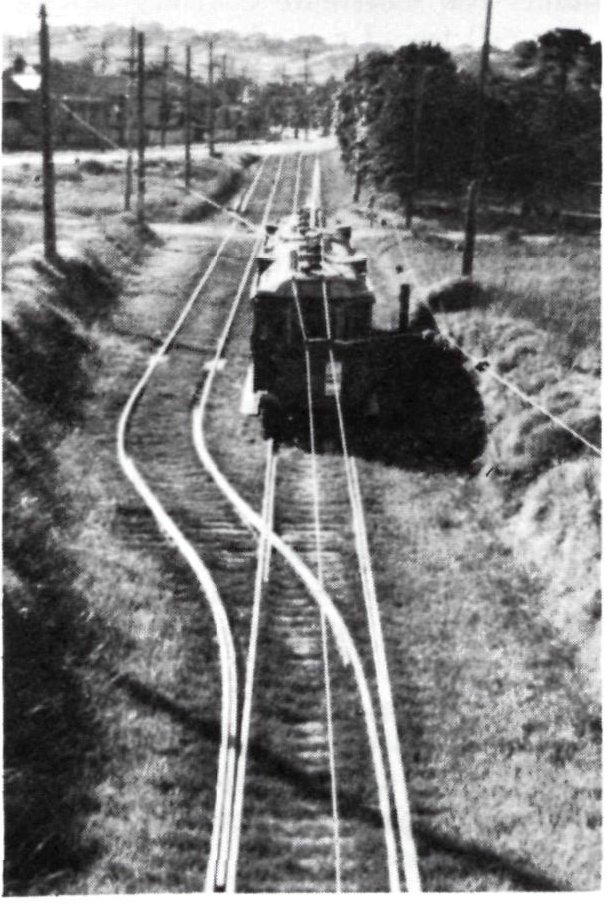 The closure of the Wallsend line in November 1949 marked the end of tramcar working on gauntlet track. Earlier sections had been employed on narrow water crossings at North Manly (North Manly Lagoon) and Carrington (Throsby Creek). The example on the Wallsend tramway enabled trams to negotiate a narrow opening under the Lambton Coal Co. railway. A similar cramped parallel opening served the adjacent roadway; this restriction caused the single Wallsend tramway to be replaced by no less than three separate bus routes. One served suburbs on the Newcastle side of the gauntlet track, a second deviated some distance to the north to serve the Lambton area beyond the coal railway, while a third bus route circumnavigated both the gauntlet track section and Lambton to reach Jesmond and Wallsend as the lengthy section of reserved tram track beyond Lambton required the bus to traverse public roads as the tramway was located through wild bushlands.

Noel Reed, on the Trams Down Under website mentions the gauntlet track and has an excellent photo showing how the two tram tracks interleaved, but without connecting. 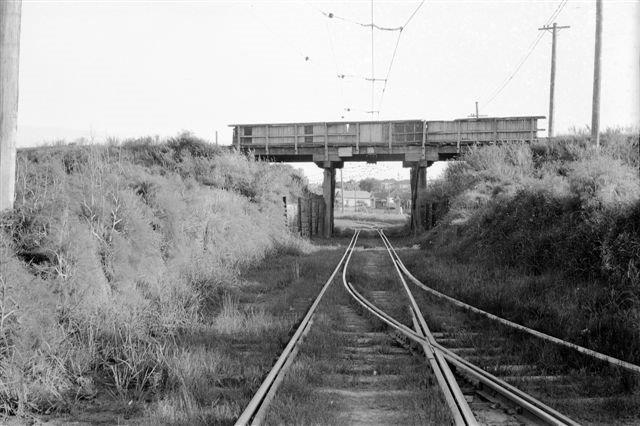 An excellent view of the gauntlet track at Lambton, looking towards New Lambton. Noel Reed.

This section of track was on a low point on the tram line, and easily flooded. Robert Watson passed on a recollection from his mother that …

” … when it was flooded, the tram would arrive from the city side, then passengers would disembark, walk up and under the road bridge, then walk down to the Wallsend tram waiting on the other side to allow them to continue their journey.”

The lowering of Hobart Road

In 1957, in order to allow the passage of buses under the rail bridge on Hobart Road, the road was excavated and lowered. 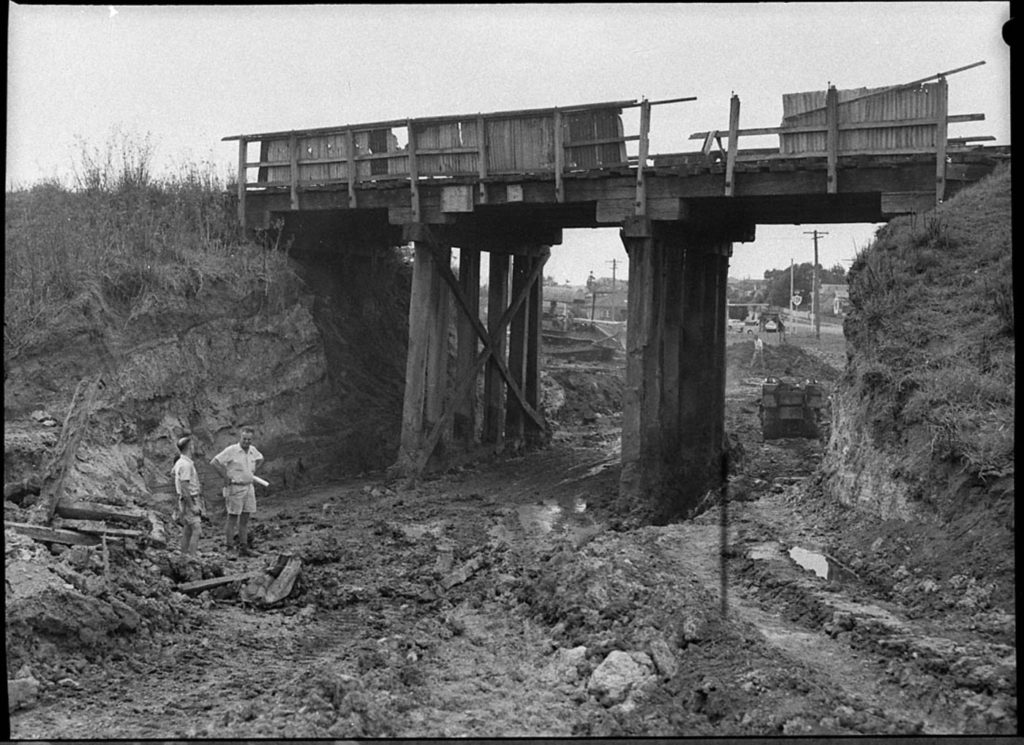 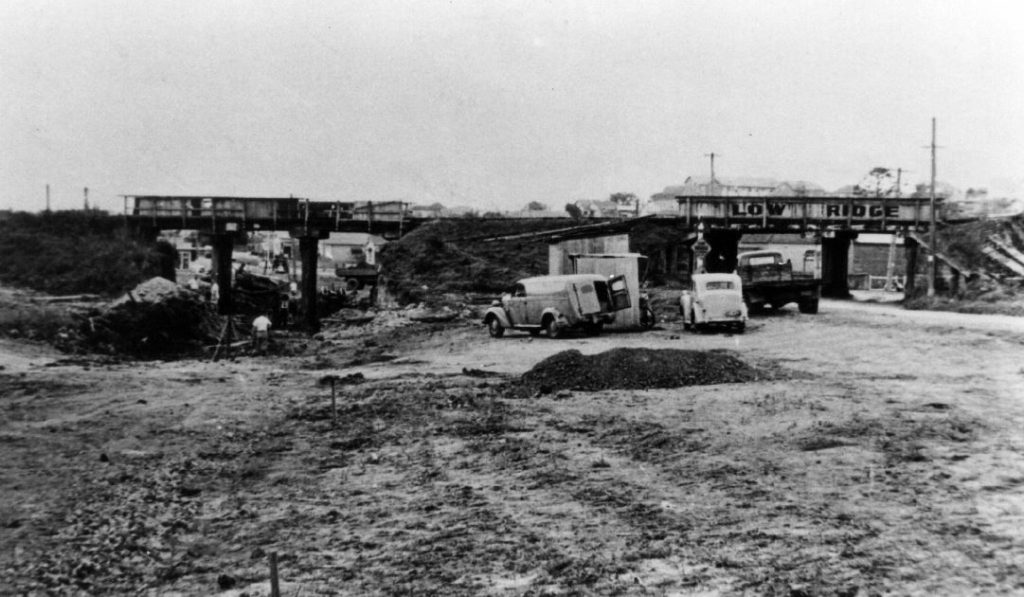 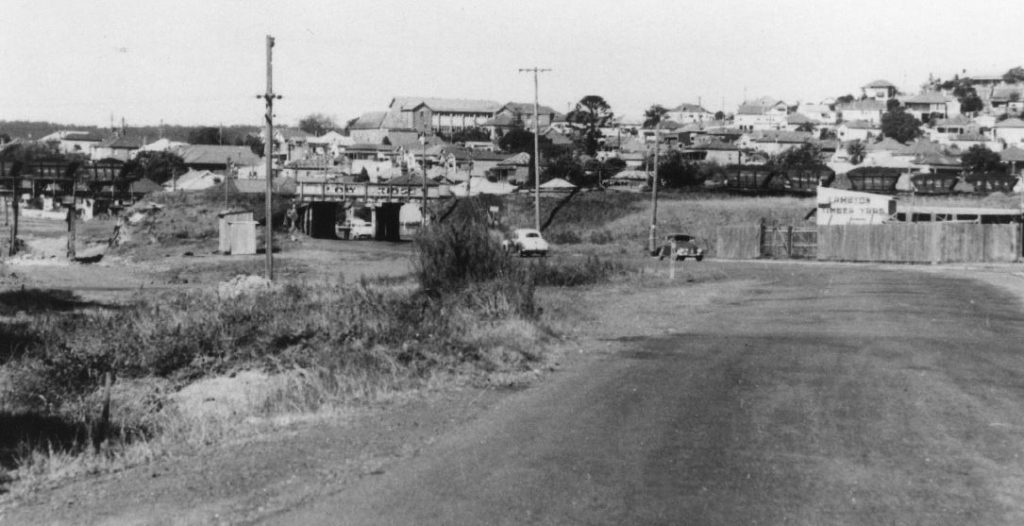 Fortunately one of the photographs of the excavation shows two men standing on the ground on either side of the bridge. This allows us to deal with the problem of perspective and get an estimate of the height of the bridge, which comes to almost exactly 3 men high.

Using a similar process on another photo from that era, we see a double deck bus is a little over 2 men high – so it is quite plausible that the 1957 lowering of Hobart was in order to accommodate double deck buses. 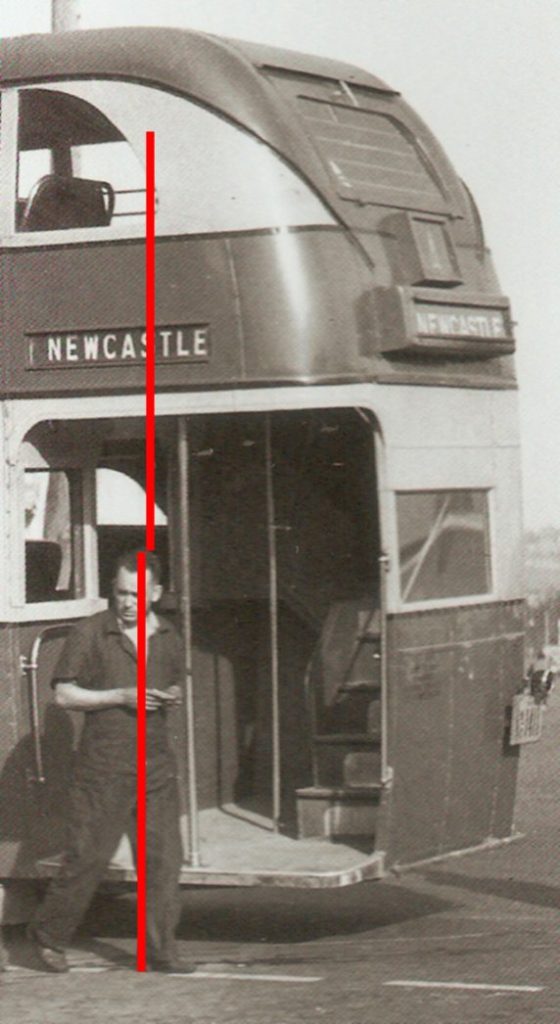 [Some considerable time after doing all the above calculations, I found the following photograph in the Local Studies section of Newcastle Library, in their folder of newspaper cuttings relating to Lambton.] 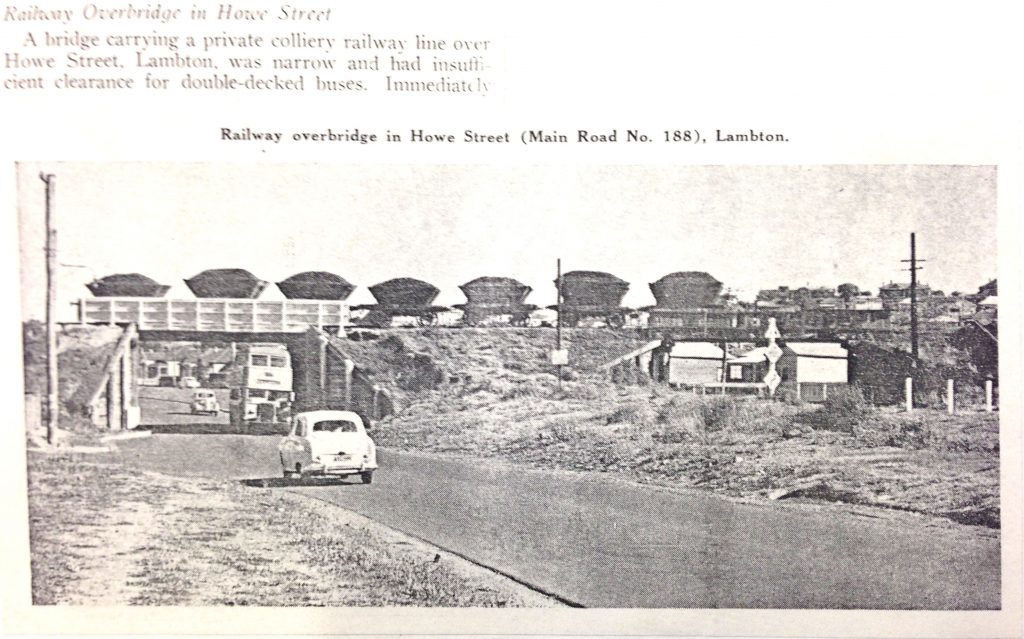 The lowering of Hobart Rd in 1957 to accommodate double deck buses under the rail bridge means that 60 years on the road is still subject to flooding after heavy rainfall. 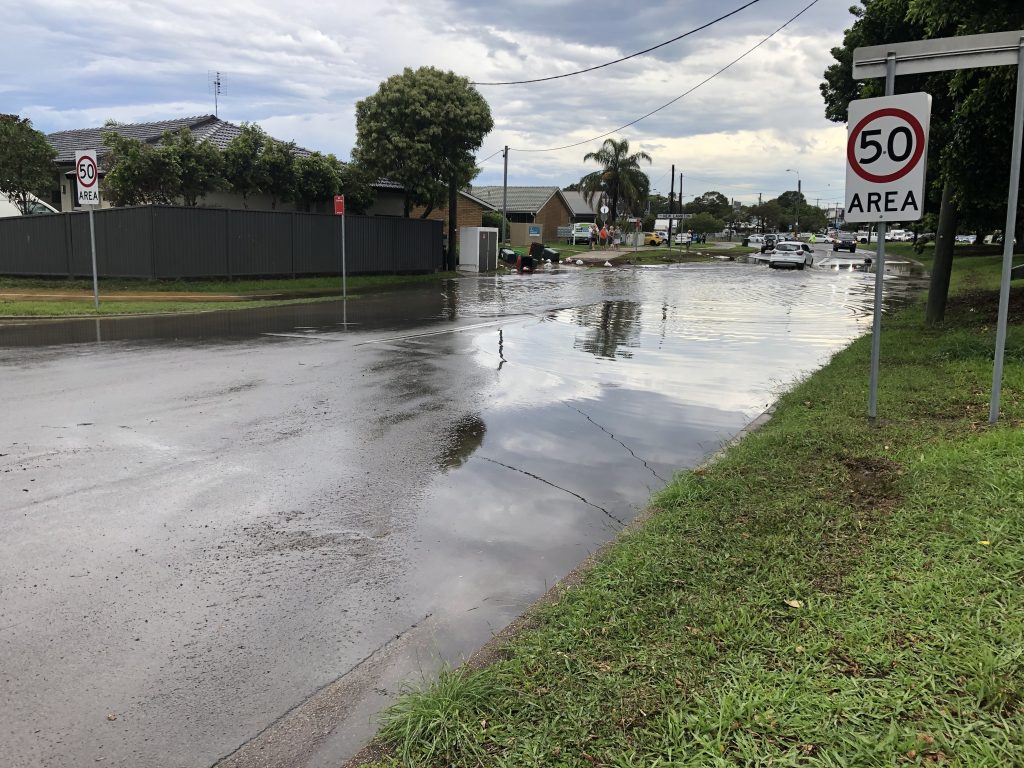 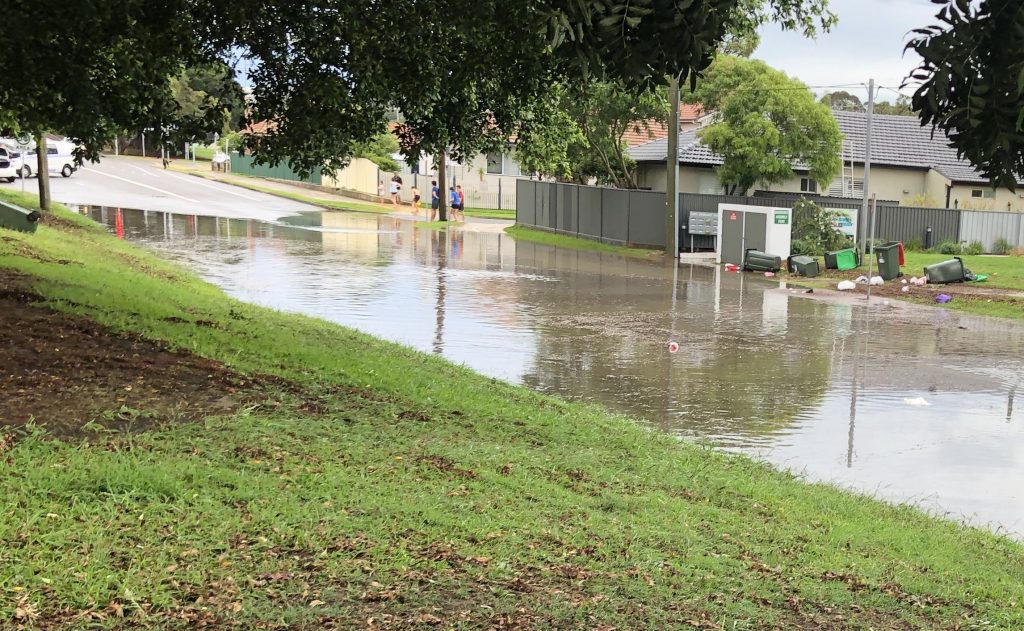 The end of the coal rail and bridges 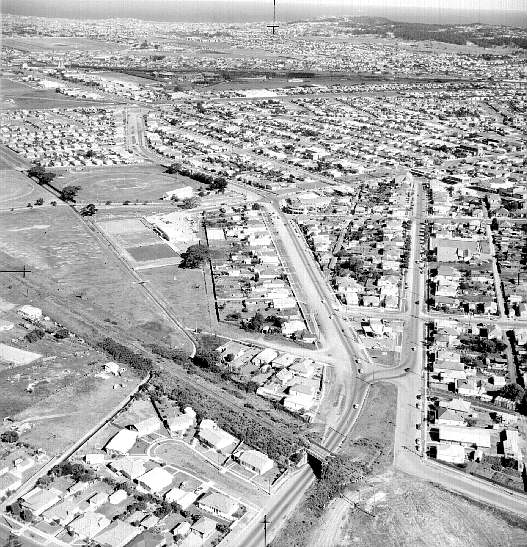 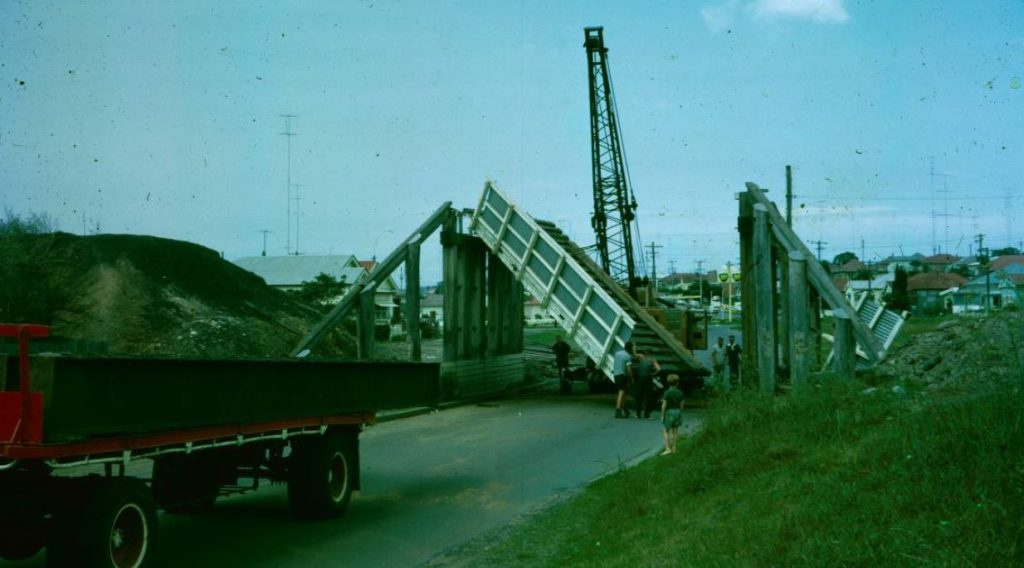 The colliery railway bridge over Hobart Road being removed in March 1966. S. Woodington. 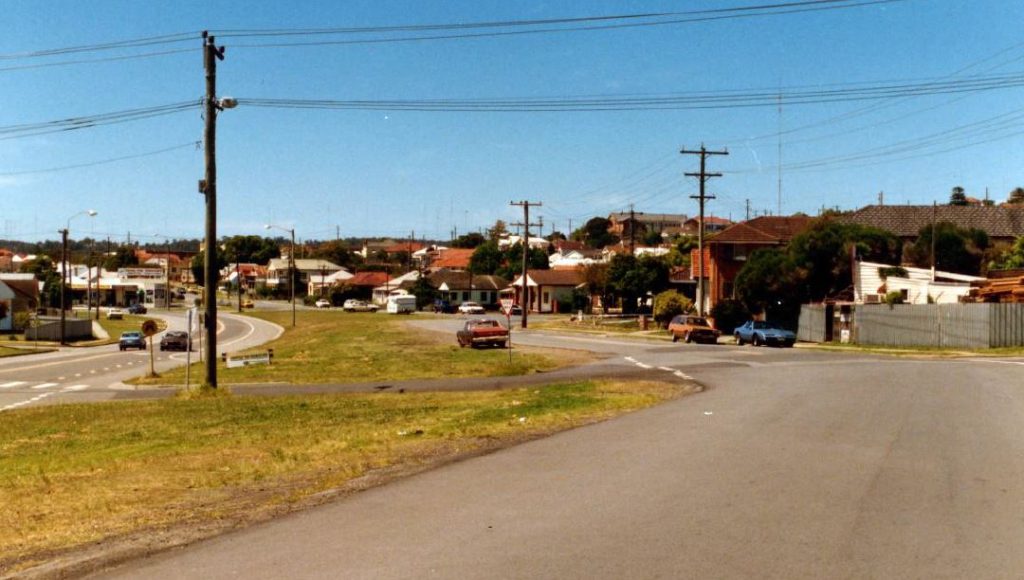 Site of the former coal rail bridges in 1986. Albert Bates.

In mid 2016 significant traffic changes were introduced in this area by Newcastle Council, including: 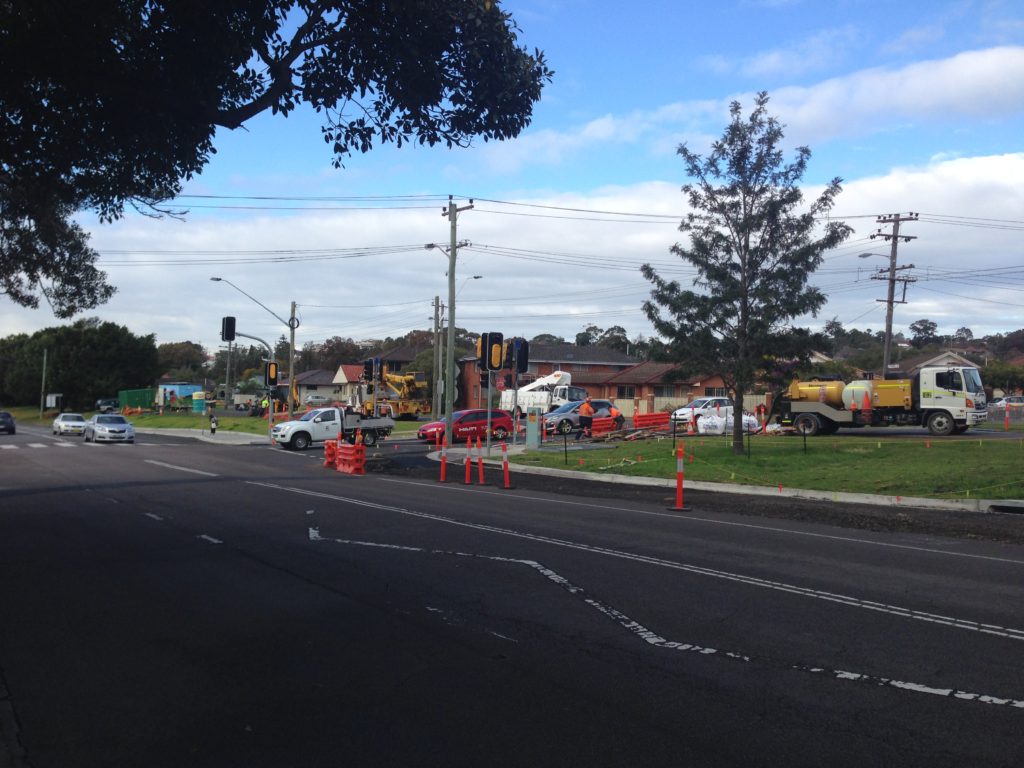 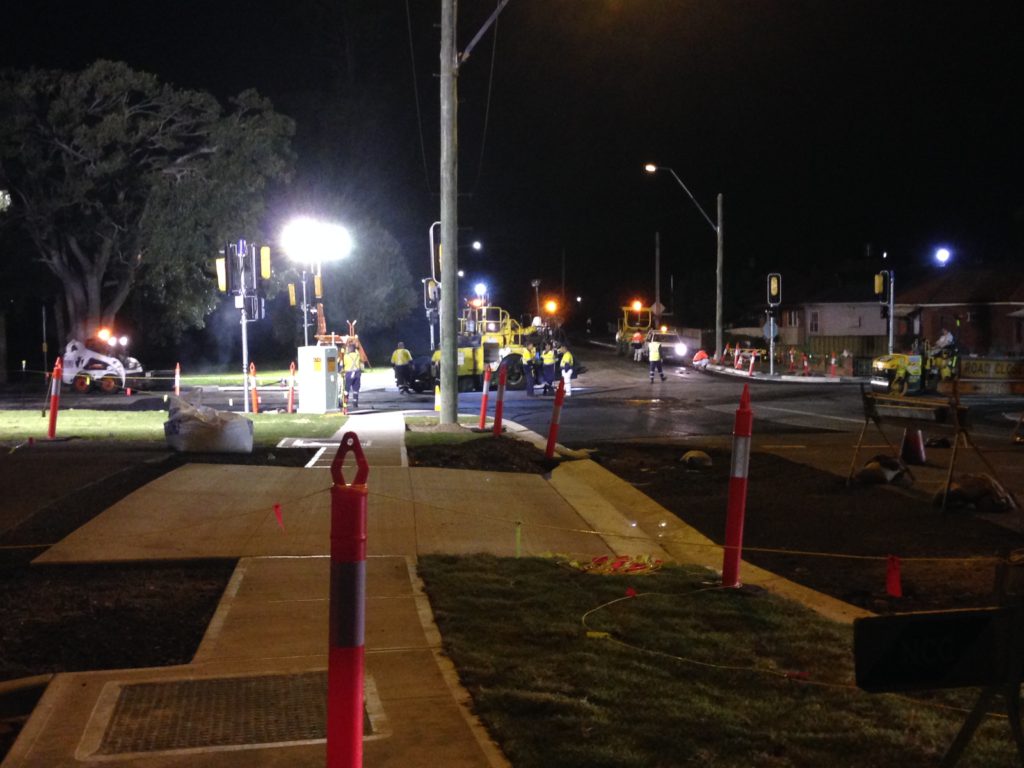 Laying down the final road surface on the night of 28th August 2016. 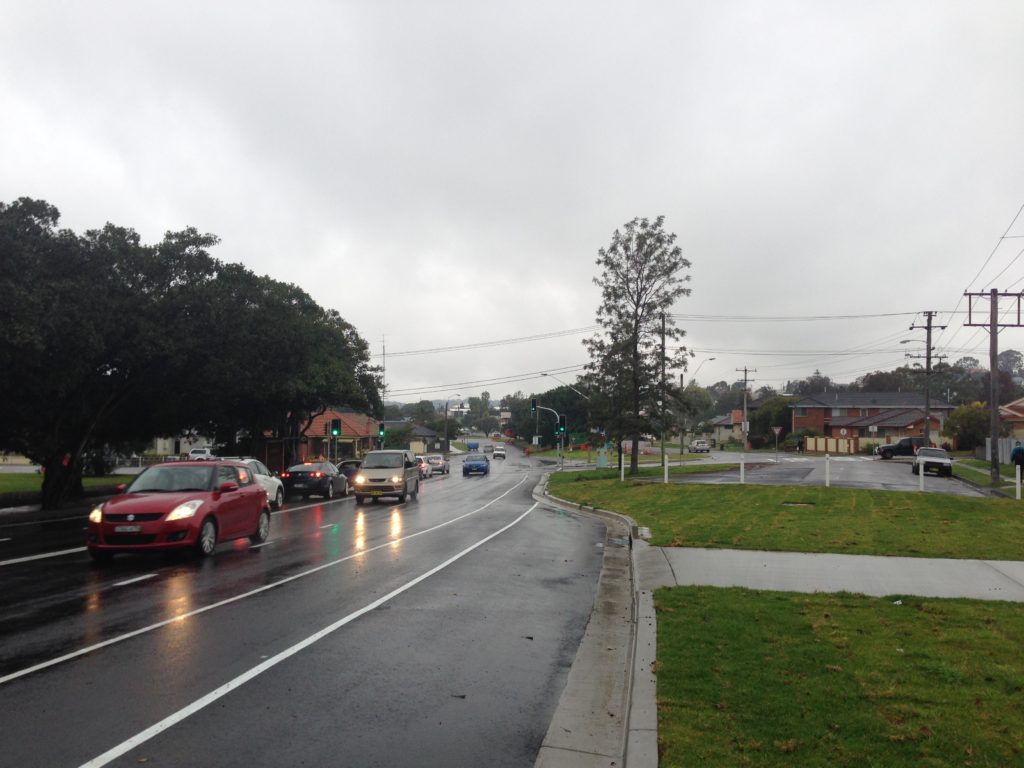 The day the traffic lights were turned on, a rainy Friday 3rd September 2016. 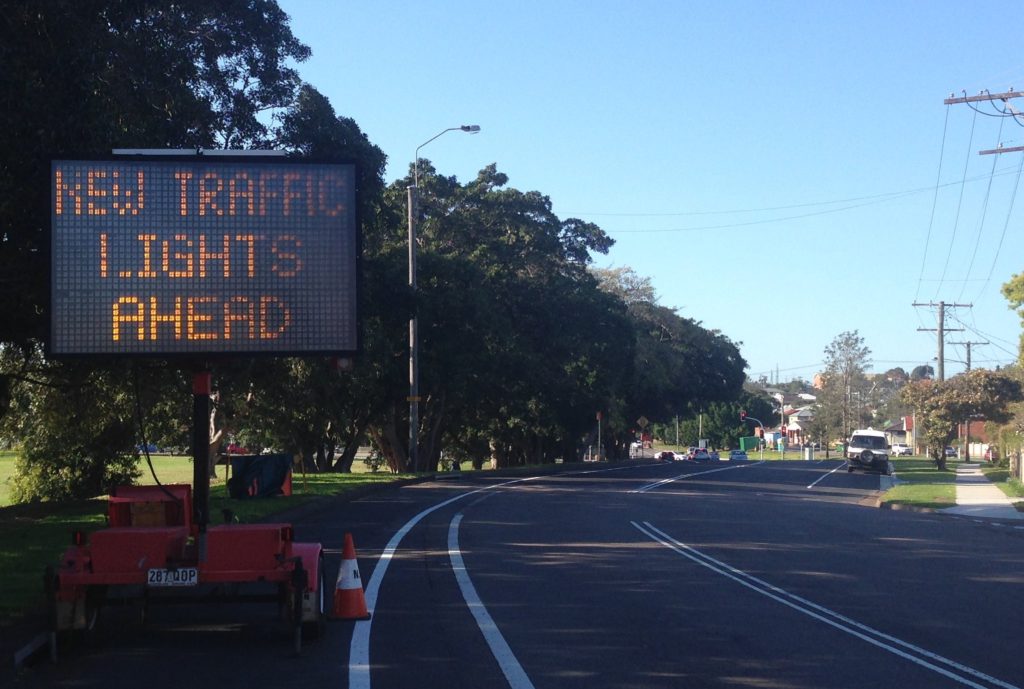