In 19th century coal mining towns, reading materials were an unaffordable luxury for many. For this reason many townships established a Mechanics’ Institute, where for a small annual subscription members could borrow books, newspapers and periodicals.

In New Lambton at a public meeting in September 1891, a committee was elected to establish a Mechanics Institute. Initially they used a small room in the council chambers, but were eager to obtain their own building. In 1899, after considering five possible sites, the committee applied to the government for land in Regent St opposite the public school. Their request was granted and construction commenced in April 1901. The building opened in September and Ralph Snowball’s photo justly recognises the substantial fund-raising efforts of the women in the committee.

With a spacious reading room in a new building, membership increased rapidly. When the Hand of Friendship Hotel on Regent St closed in 1906, the Institute purchased the large hall behind the hotel, dismantled it, then re-erected it behind their existing building. The hall was officially opened in April 1909, and for decades following was a well-used venue for social, political, religious, community and family events.

The provision of reading material by the Institute continued, but that role was to change after the formation of Greater Newcastle Council. In 1949 council began negotiations with mechanics’ institutes in Newcastle “with a view to taking them over for the establishment of free libraries.” In New Lambton this offer was tersely rebuffed by the Institute secretary who wrote, “We are in a sound financial position, and giving the residents of this suburb a satisfactory and efficient service.” But the in the long run a paid subscription model could never compete with a free library service. In 1972 council purchased the Institute’s land and constructed New Lambton branch library, opening it in September 1973. The Mechanics’ Institute may be gone from the site, but its function of providing reading material remains in place.

The article above was first published in the September 2021 edition of The Local.

What’s in a name?

From about 1927, mentions in the newspapers of the New Lambton Mechanics Institute as an organisation (yearly meetings, activities, reading material) seem to transition to “Literary Institute”, whereas mentions of the “Mechanics Institute”mainly refer to the venue being used by other groups.

Within a year of the establishment of the Mechanics’ Institute as an organisation, there was an eagerness to press on to obtain land and a building for their use. At a public meeting on 29 August 1892, Thomas Croudace spoke, saying that …

“Respecting Mechanics’ Institutes, he remembered the time when such institutions took the place of public schools; but although the schools were now plentiful, yet the necessity for Mechanics’ Institutes still existed, as education did not cease with youth, but went on and on until the day of death. He urged the addition of debating classes and other adjuncts to fit and prepare members for their position, as citizens, politically and socially. He would also like to see the ladies become members. Mr. Alexander Brown had kindly offered them £100 to purchase a lot of land as a site for their projected building, and efforts were being made to obtain endowment from the Government on this amount towards erecting a building. He urged upon all present, who were able, to become members and swell the numbers, which would substantially assist the committee. By educating themselves and their young people they were building up a great nation, and very often their greatest men rose from the ranks of the working classes; and he earnestly requested all to unite in promulgating the great agency of education.

Mr. T. WALKER, MP, next addressed the meeting in regard to the necessity for Mechanics’ Institutes, saying that …

“These opened up avenues for future greatness which were incalculable, and he hoped all would embrace the opportunity, as there was no better companion than a good book. He referred to the possibility of having enjoyable intercourse with the ancient writers who were models to the 19th century in the way of art. Books of travel, history, adventure, and science in all its phases were all open to them, and should be faithfully perused by them. They should encourage debating, which tended to brighten the mind and sharpen the intellect. The ladies should also join, and they would find the benefits inestimable. Education divided the civilised from the barbarian, and they should always be widening the gulf.”

Despite the initial enthusiasm for a building and the establishment of a building fund, the institutes plans languished for a few years, until a public meeting in August 1899 debated five possible sites, and voted to make application to the government for an allotment in Regent Street, opposite the public school. The request was granted in February 1900. 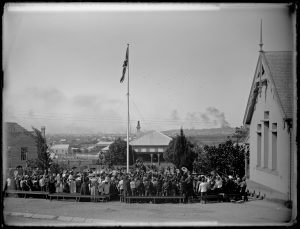 Construction of the building in Regent St was in progress by April 1901. The construction can be seen in the background of a May 1901 photograph of a flag raising ceremony at New Lambton Public School.

The official opening ceremony of the building took place on Saturday 7 September 1901, and was opened by the Hon John Perry, minister for Education. In the speeches at the opening, Mr. George Watson, the institute secretary gave a brief history of the movement to erect their own building …

“Having commenced a move in 1892, the committee stuck together through trying times, and aided by the ladies, who arranged concerts and socials, together with a bazaar, the substantial sum of £205 was got together for the purpose of erecting the building on the site granted by the Minister for Lands. The tender accepted was one by Mr. William Knight, whose price was £324, but the extras brought the total cost up to £445 12s 6d. The committee wished to publicly thank all who had contributed towards the building fund. Mr. E. G. Yeomans was the architect for the building, which is of wood. The main room is a commodious one, measuring 40ft x 25ft. The side rooms at the entrance, one to be used as a games room, and the other as a library, each measure 18ft x 12ft, the lighting throughout being provided by kerosene lamps of great brilliancy.”

The photos of the Mechanics Institute by Ralph Snowball in September 1901 are listed on the cover of Box 263 of his glass plate negatives. It is from here that we know that the people posed in the photo are the committee of the School of Arts/Mechanics Institute.

After the Hand of Friendship Hotel closed in 1906, the owners Tooth and Co advertised the sale of the land and buildings in February 1907. One of the buildings for sale was a hall behind the hotel, described as …

“The CENTENARY HALL, 35 x 60, built of iron, and lined throughout, with Stage, Dressing Rooms, and Seating complete.”

There were no offers to purchase the hall initially, but November 1907, the Mechanics’ Institute voted to acquire the building, with the purchase …

“… subject to removal … to its new site”

Specifications for the removal of the hall were approved in January 1909, and the hall was rebuilt at the rear of the existing institute building in March 1909. A ball was held in the new hall on 23 April 1909 to celebrate the official opening in its new location.

In December 1922, the block of land where the Mechanics’ Institute was located was officially dedicated to the trustees of the Institute and a land title granted in Vol-Fol 3444-116. How is this different from the gazetted “reservation” of land in 1900? I’m no legal expert in land conveyancing, but it seems that the “reservation” of land in 1900 was more of a temporary allocation of land by the Crown for a particular purpose, with the Crown retaining ownership, whereas the 1922 “dedication” was a permanent allocation, with ownership of the land being granted to the institutes’ trustees.

The Mechanics’ Institute facilities were used over the years for a huge variety of community and social functions, such as …

One of the more memorable uses of the institute came in July 1953, when severe cracking of the boys classrooms at the public school due to mine subsidence, meant that the students had to be moved, with two of the classes were relocated to the Mechanic’s institute. The damaged school building was demolished in March 1954 and new classrooms erected in its place.

The rise of free public libraries

The transition from Schools of Arts and Mechanics Institutes providing reading materials, to free public libraries is eloquently dealt with in a 4 January 1949 article in the Newcastle Morning Herald and Miners’ Advocate. In an article entitled “Newcastle rises from the book cemetery”, Eric Sparke writes in part …

An American expert who inspected Australia’s library facilities in 1934 said, justly, that our libraries were “cemeteries of old and forgotten books.” Since the decline of the once vigorous Schools of Arts and Mechanics’ Institutes at the turn of the century, Australia’s progress to “free” libraries has been slow – painfully slow.

The Australian must be made to realise that the free public library is not just a collection of books for avid fiction readers and erudite scholars. The scheme aims to provide books for all – the apprentice fitter and turner, the business man, the housewife.

An English migrant told me he was appalled at two things in Newcastle when he came here to live – 6 o’clock -closing and the absence of public libraries. It was no sublime-ridiculous touch when he linked beer with books. On the contrary, he proved that libraries had become so much part of his everyday life that he expected to have them on tap, like his beer, when he wanted them.

Newcastle Pubic Library, with a staff of 13, has branches at Waratah and Wallsend. Others will follow as soon as practicable. Waratah branch has 1260 adult members and 1700 children. It was opened in September. Wallsend, open only three weeks, has 700 adults and 1000 children. As yet, the main library, which will be built into a lending and reference centre of which the city will be proud, is cramped in a small room in the City Hall.

With the building of the library wing as the first objective of the Cultural Centre Appeal, the day when Newcastle’s reference library will be open to John Citizen is at least in sight.