And so will disappear an ancient landmark, which unfortunately will soon be forgotten.

These closing words of a 1933 newspaper report on a building demolition proved true, for few people today passing the corner of Regent St and Russell Rd know that it was the site of one of New Lambton’s earliest hotels.

The Hand of Friendship Hotel was opened on 18 September 1869, its first publican Benjamin Lunn pledging in an advertisement the sale of ‘none but the very best wines, spirits, ales etc.’ The premises also offered ‘abundant accommodation for the requirements of a colliery township.’ It was just the second hotel to open in New Lambton, when the town was barely a year old and the streets not yet formed.

Benjamin Lunn remained the publican until his death in 1878 when the hotel passed to his wife Jane, and later to their son James in 1884. In the ensuing years, the hotel had numerous licensees. Ralph Snowball photographed the hotel in September 1895, and the group standing at the door is almost certainly the publican of the day, George Masters, with his wife and two daughters.

In the next decade, the hotel passed through numerous hands and the building gradually deteriorated. In 1905, the police opposed the renewal of the hotel’s licence ‘on the ground that the building was in bad condition, owing to the white ants.’ It survived that objection, but only for another year. Plans to demolish the building and erect a new hotel came to nothing, and in 1906 John Canning, the last publican to stand behind the bar of the Hand of Friendship Hotel, relinquished his licence.

The building stood idle for some time before it was sold, when it gained a new life as a second-hand goods shop. The weathering of the years however was relentless. In 1933 the building was finally demolished, and a tangible link with New Lambton’s infancy was lost. 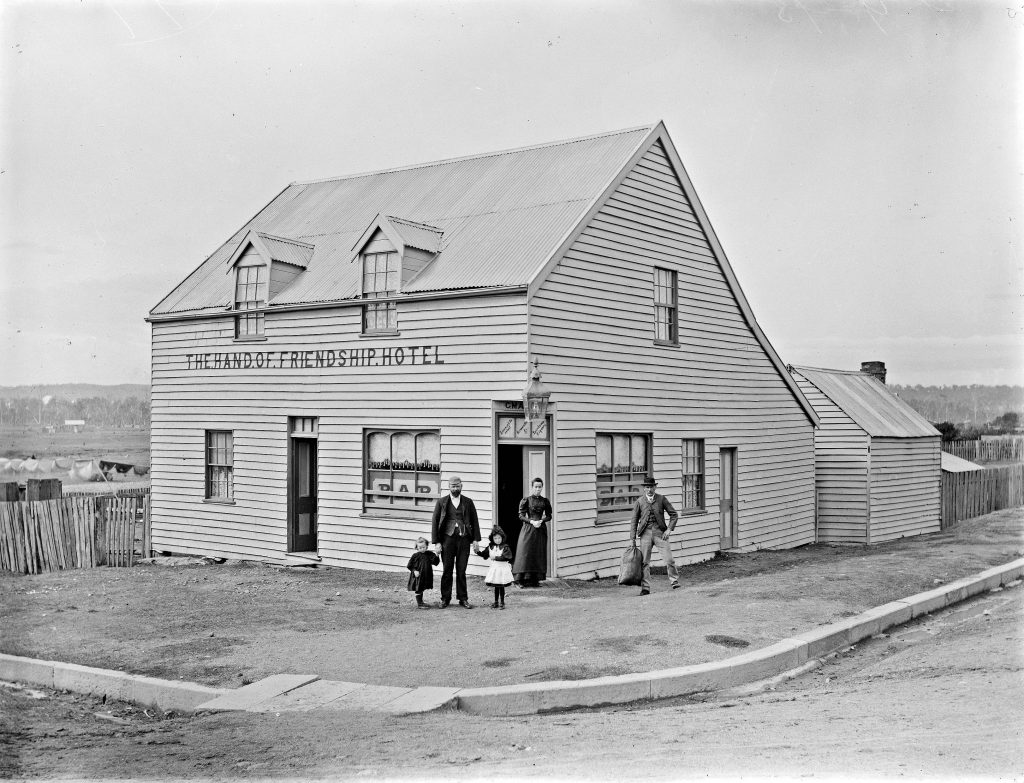 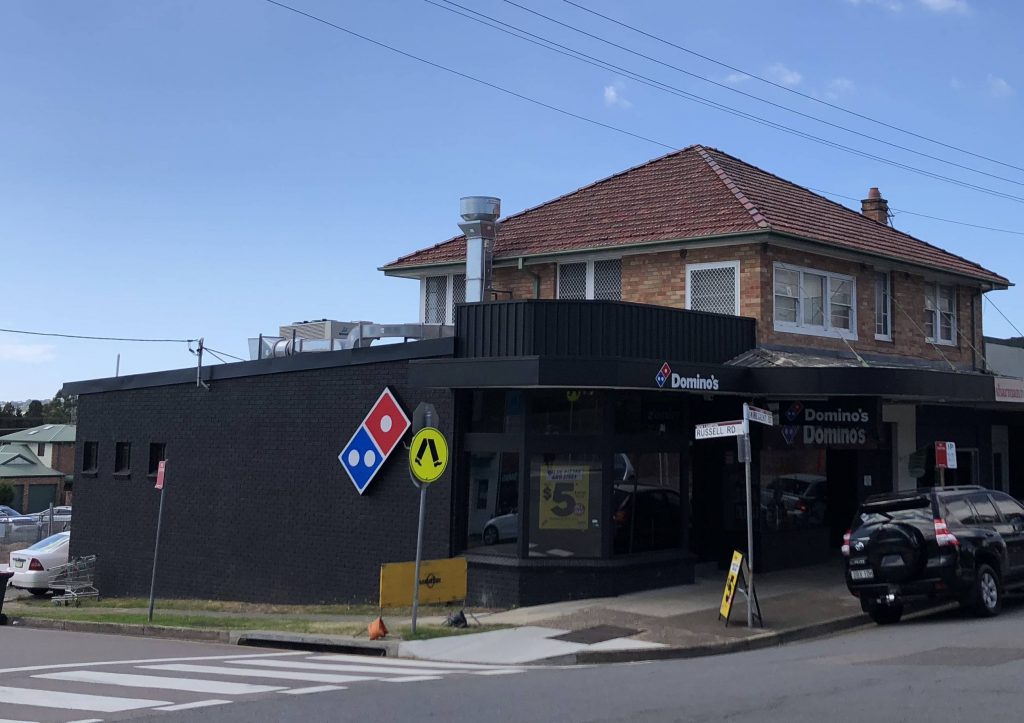 The location of the Hand of Friendship Hotel, corner of Regent St and Russell Rd, New Lambton.

The article above was first published in the February 2018 edition of the Lambton & New Lambton Local. 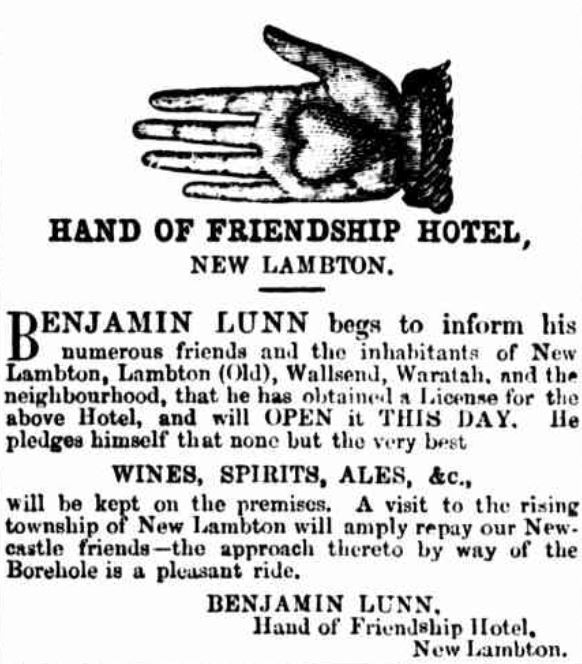 Advertisement in the Newcastle Chronicle on 18 September 1869, for the opening of the Hand of Friendship Hotel.

In the September 1895 photo the name of the publican “G. Masters” can be partially seen in a sign above the door, behind the lamp. 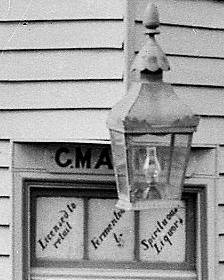 The diagonal writing in the three panels below the name says:

In November 1894, ten months prior to the Snowball photo, a stable in the course of erection at the hotel collapsed in a strong wind. Three children were injured, including the six year old daughter of the publican, George Masters, who had her leg badly fractured below the knee. It is probable that the little girl on the right in the photo is the child who was injured in the accident.

Eight years later, in May 1903 Ralph Snowball took another photograph of the hotel. 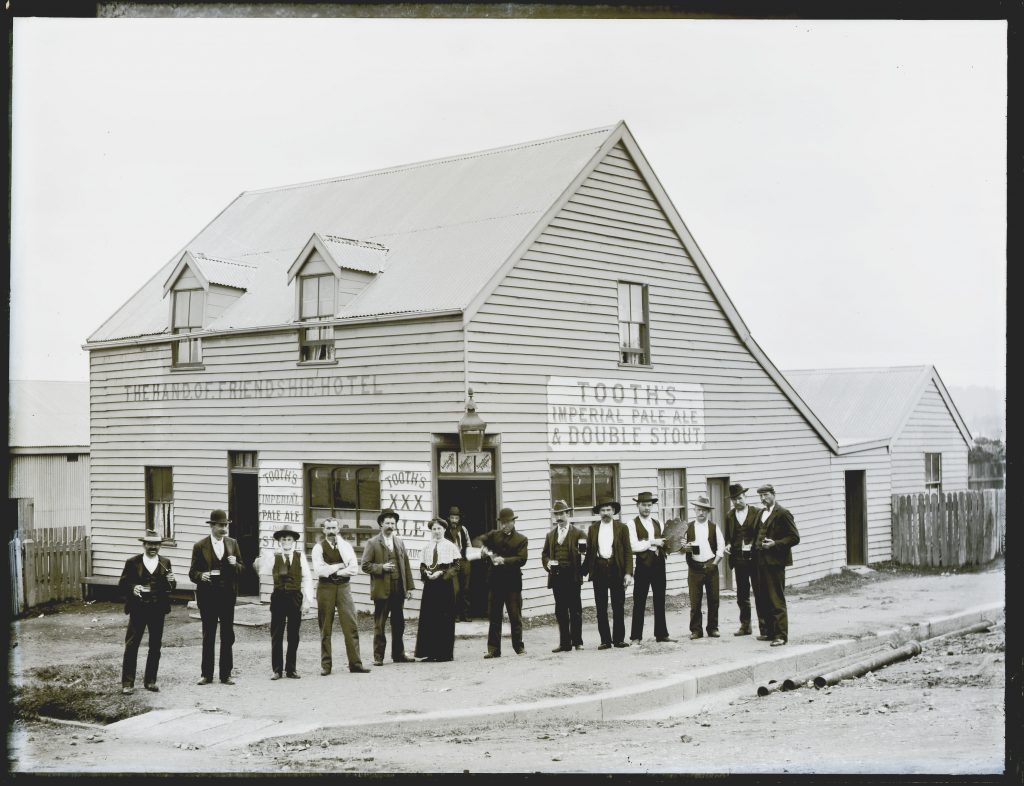 Hand of Friendship Hotel, 2nd May 1903. Photo by Ralph Snowball. University of Newcastle, Cultural Collections. Part of the Centenary Hall can be seen behind the hotel, at the left side of the photo.

The publican at this time was Phillip James Byrne, having acquired the license from Edmund Butterworth three months earlier in February 1903. Note in the sign above the door there is a faint H at the end, which is probably the remnants of the name of the previous licensee. 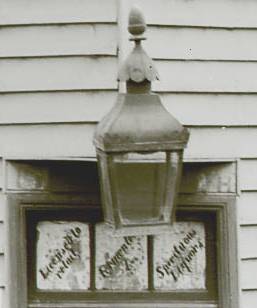 In June 1903, just a month after this photograph was taken, the application of Phillip James Byrne for a renewal of the license was objected to on on the grounds that “the accommodation was inadequate, and the place in an insanitary condition.”

In 1906 the hotel ceased to trade, and in January 1907, the owners of the building, Tooth and Co., put the property up for sale. The sale included the land, hotel building, and the Centenary Hall adjacent to the hotel and fronting Russell Rd. The land was described as having frontage of 133ft 4in to Russell St, and 98ft 3in to Regent St.

The Centenary Hall was purchased by the New Lambton Mechanics’ Institute in 1908, and then dismantled and re-erected on the institute’s block on the corner of Regent St and Alma Lane in 1909. 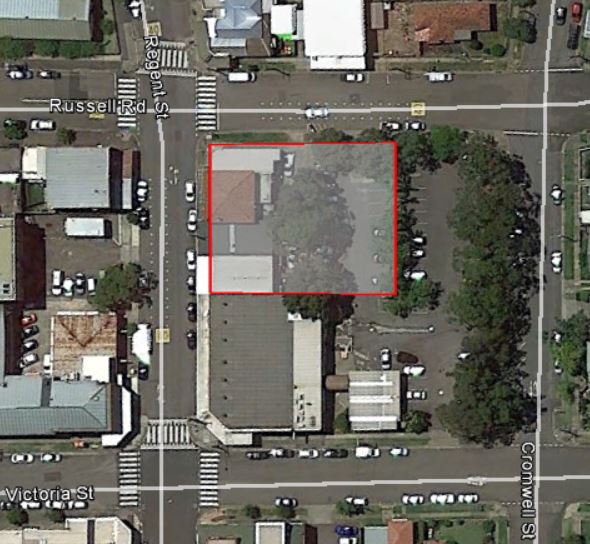 Site of the Hand of Friendship Hotel and Centenary Hall, New Lambton.

The 1933 report on the demolition of the building had an accompanying photograph. (The paper printed the photograph back to front as a mirror image. I have corrected the image below.) 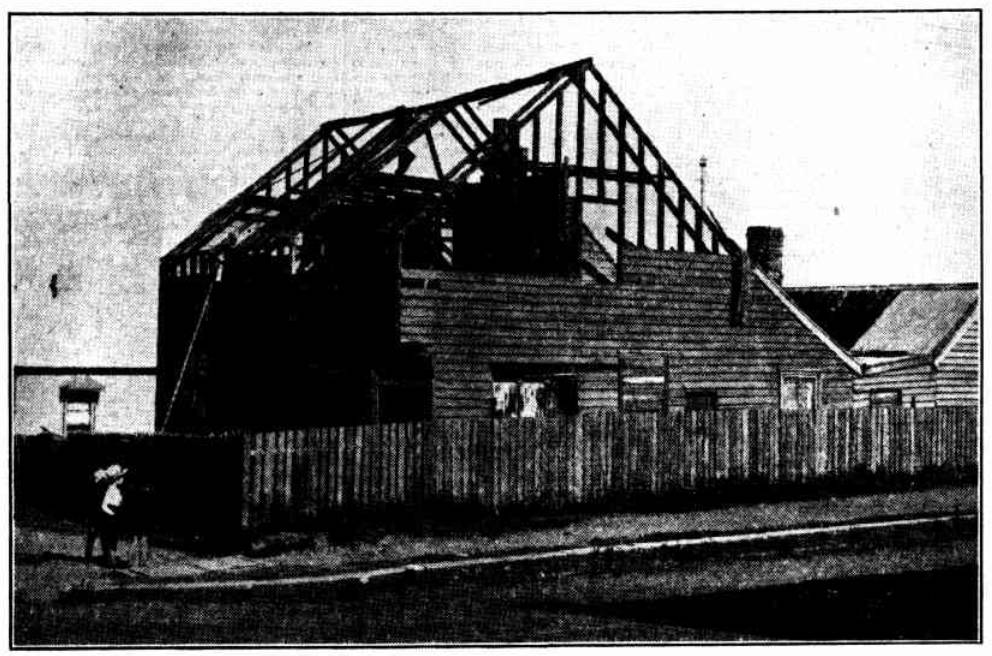 Demolition of the former Hand Of Friendship Hotel building in 1933.

The following is a list of licensees as gleaned from various mentions in newspaper articles over the years. Some of the dates are known with certainty, as there is a report of the license being transferred from one person to another. For some licensees I have had to make an informed estimate based on the first and last reported association of the licensee with the hotel.

The 1933 article on the demolition of the building states that “Ben Bradley (afterwards an alderman in the New Lambton Council)” was also a licensee, but I can find no independent evidence for this. Benjamin Bradley did have a publican’s license at one stage, but it was for the Lake Macquarie Hotel in Teralba.

The article also states that Jack Canning “was the last to stand behind the bar of the old hotel”. Although this is true, he wasn’t the last licensee. George Bertram Bowser was the final licensee, for just under a month in October/November 1906. The report on the cancellation of his licence in November 1906 however, makes it clear that the building remained unoccupied during his short tenure as publican.

2 thoughts on “The Hand Of Friendship Hotel”