In my first article one year ago I noted there were few visible remains of the Lambton colliery, the industry that gave birth and growth to our town. Since then I have discovered a few more fragments of mining activity in the bushland around Lambton. But these are minor compared to what Newcastle Council found when carrying out renovations to the Carnley Avenue area of Blackbutt Reserve in late 2014, when an old 62 metre deep mine shaft was uncovered. 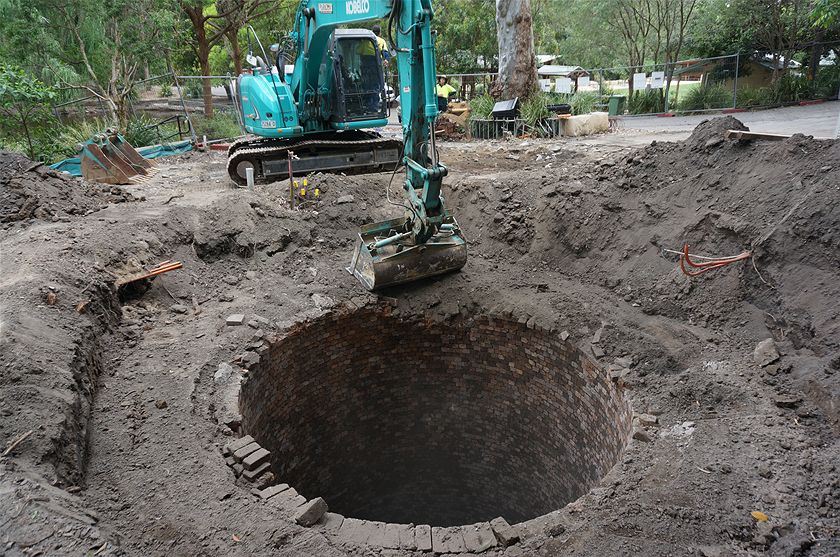 This shaft was the “Mosquito Pit” of the Scottish Australian Mining Company, whose 1840 acre lease stretched from Lambton in the north, down to Kotara South. The shaft, also known as “Centre Pit”, was sunk in 1878 and originally used to draw coal to the surface by a rope and capstan system powered by horse.

Later the shaft was used for the vital function of ventilation, to expel stale air and poisonous gases from the mine workings, and to draw in fresh air. Before electric fans were introduced in 1926 the mine was ventilated by thermal means. By operating a furnace at the bottom of the pit, the hot exhaust fumes rose to the top of the upcast shaft, and drew cool fresh air from other downcast shafts into the mine. 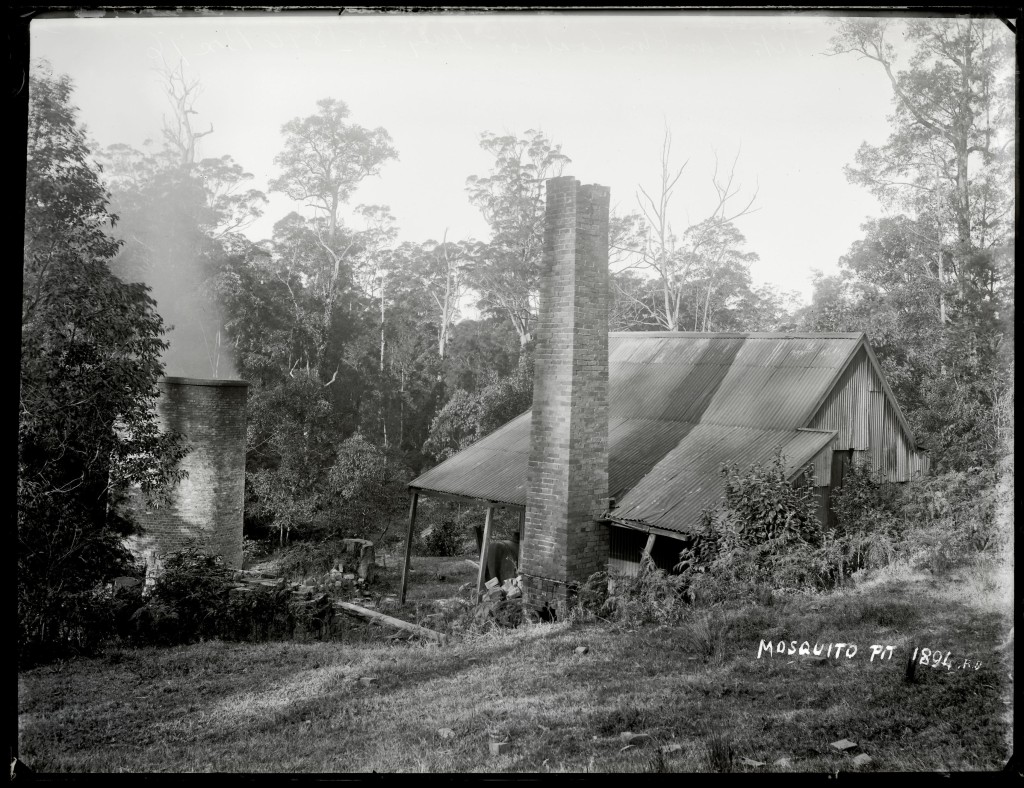 The 1890 Ralph Snowball photo shows the furnace fumes rising from a circular chimney stack, whose brickwork continued below the surface down the first 11 metres of the deep shaft. It was this upcast shaft that was uncovered during the 2014 renovations.

Although Mosquito pit contributed greatly to safety in the mine, it had an inauspicious beginning. In October 1878 two men, Mr Robert Brown and the assistant colliery manager Mr Thomas Seymour, died in the recently dug shaft succumbing to poisonous gases, tragically falling victim to the very problem that the ventilation system went on to solve. 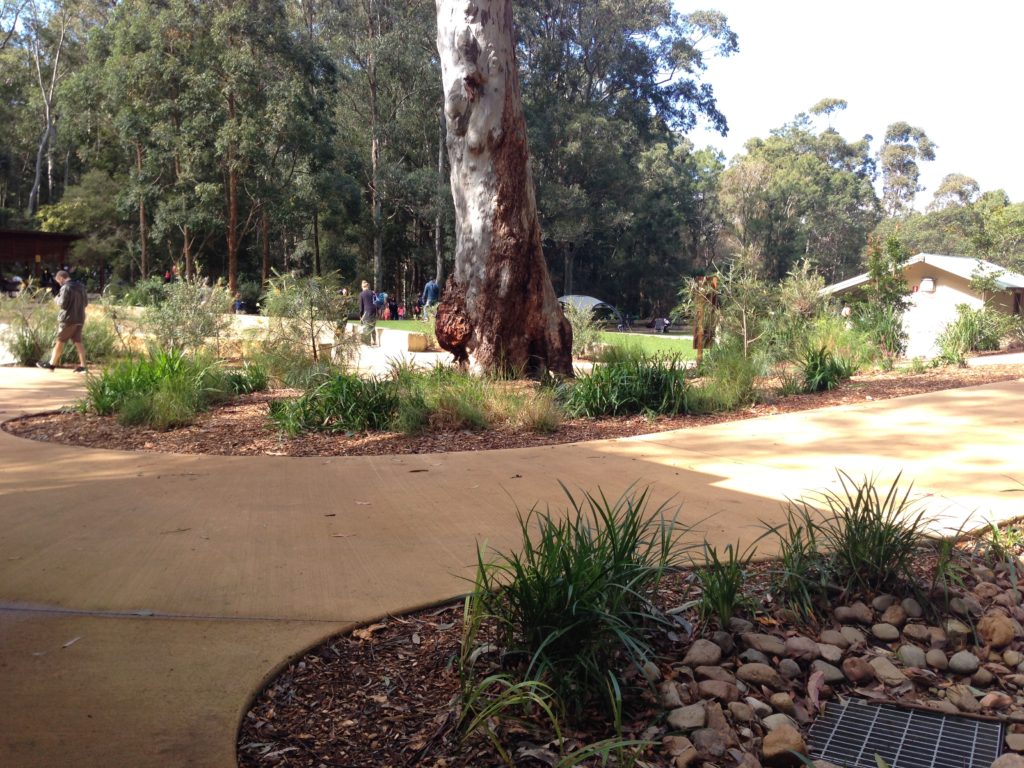 The site of the Mosquito Pit shaft in August 2016, after upgrades to the picnic area were completed.

The article above was first published in the February 2016 edition of the Lambton Local.

The location of Mosquito Pit 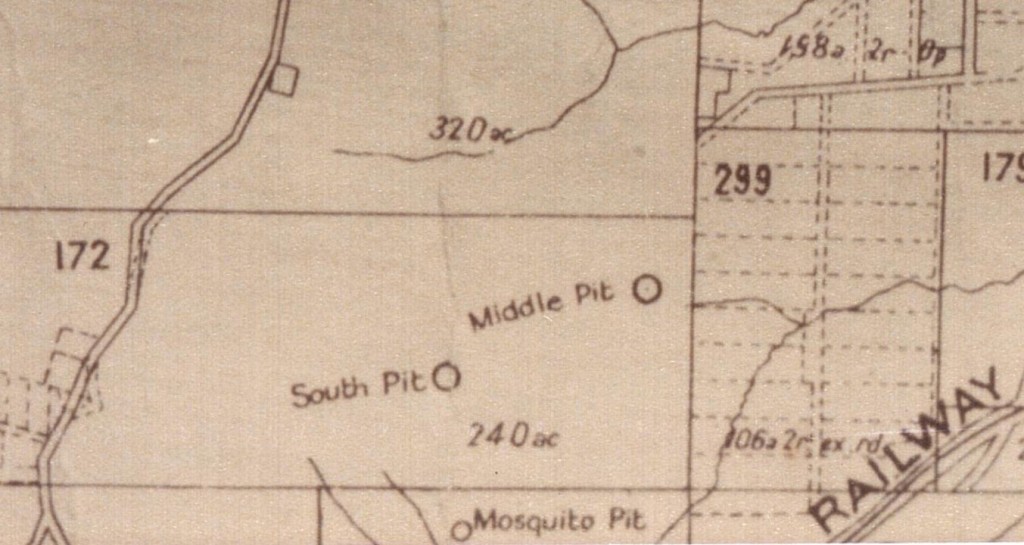 This 1932 Department of Mines map shows the location of both Mosquito Pit and Middle Pit. 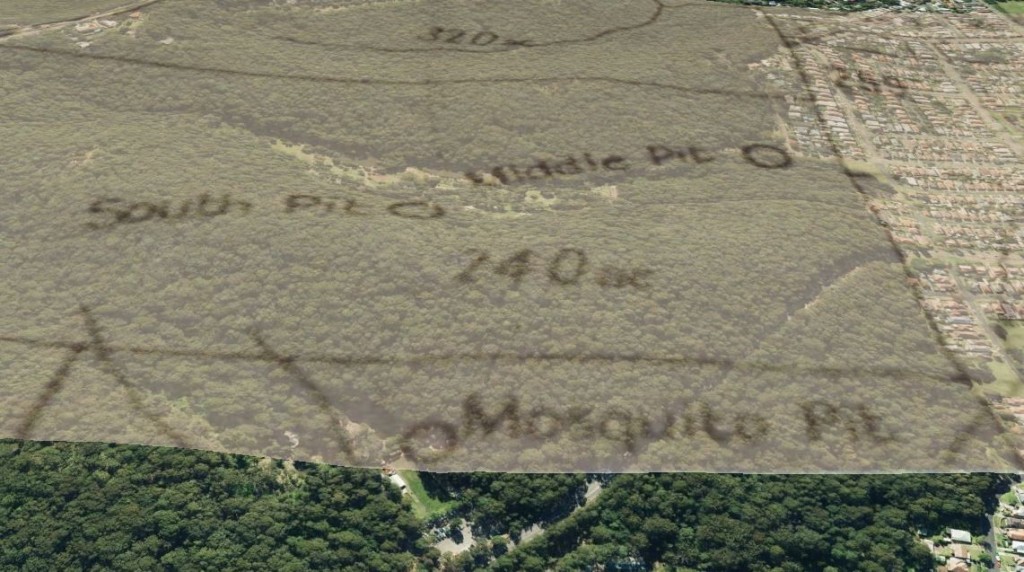 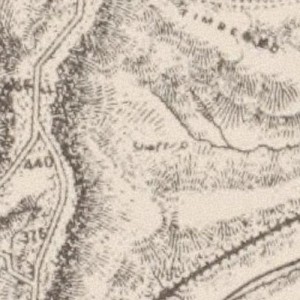 The National Library of Australia has a circa 1936 map from Kenneth Craigie and Co that shows Mosquito Pit and the adjacent engine house. 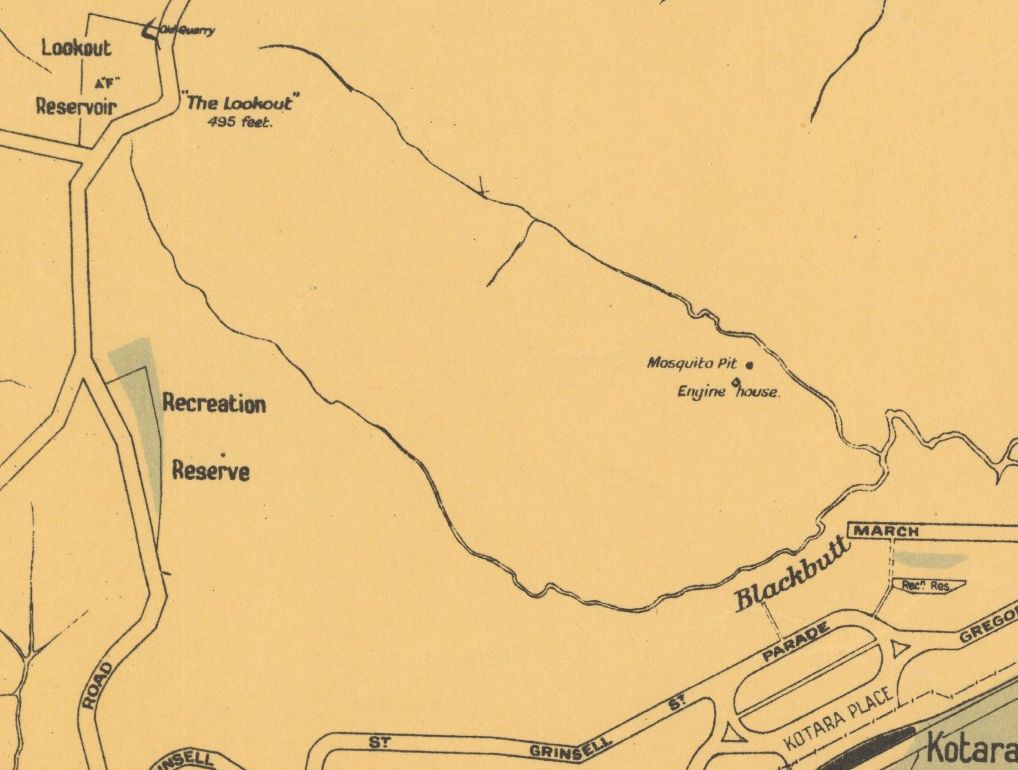 Another interesting piece of evidence as to the location of Mosquito Pit comes from an 1887 court case between Alexander Brown and the Commissioner of Railways, where the Browns who had a mining lease in the area, were arguing about the amount of compensation they received when the construction of the Great Northern Railway cut through the corner of their mining lease, leaving an effectively unusable triangular area of 21 acres. Amidst the arguments about whether there was or wasn’t coal under this area, mention is made on day nine of the court case that

“The Mosquito was about 130 yards from the northern boundary of the disputed land.”

By overlaying an old map with the mining leases marked, the disputed triangular area can be identified, and by extending the line of the northern boundary, I measured that the shaft uncovered in 2014 is 100 yards from this line. Given the inherent inaccuracies involved in overlying and aligning old maps in Google Earth, this matches remarkably closely to the 130 yards stated in the court case.

“The Mosquito was about 130 yards from the northern boundary of the disputed land.”

At the inquest in into the death of Mr Brown and Mr Seymour, Arthur Burnley stated that the shaft “is about three miles from the working shaft”. Presumably the “working shaft” is the shaft at the main colliery entrance near the township of Lambton, where Lewis Oval is today. The distance stated by Burnley is either an exaggeration, or the distance by road (rather than a direct line), or a combination of both. In a direct line Mosquito Pit is only 1.5 miles from the mine entrance, and in fact there is no point anywhere in the Scottish Australian Mining Company’s 1,840 acre lease that is three miles distant in a direct line from the main shaft, as the following image illustrates. 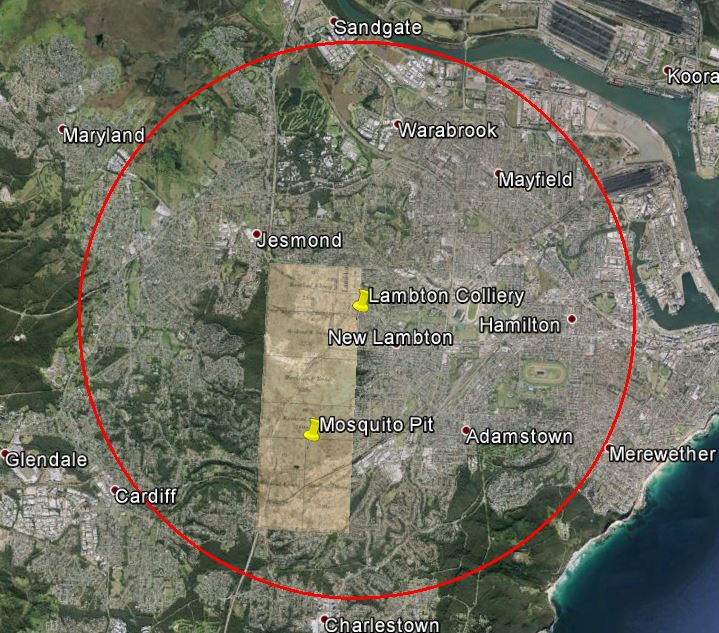 Image overlay is the 1,840 acre lease of the Scottish Australian Mining Company. The red circle is three miles distant from the main working shaft.

The shaft as measured in 2014 was 62 metres deep – the top 11 metres was brick lined, the bottom 51 metres unlined. Interestingly the inquest in 1878 states that “the shaft is about 225 feet deep”, which equates to 68 metres. Given differences in where you might define the “bottom” and “top” of a shaft to be, and the erosion of material into the bottom of the shaft over 136 years, this lines up very well with the 62 metres measured in 2014.

The death of Robert Brown and Thomas Martyn Seymour on Tuesday 8th October 1878 was reported in the newspaper the following day, and further details from the inquest were published the day after.

At the time of the accident, the mine manager Thomas Croudace was on leave in England, and his position was being filled by the assistant manager Thomas Seymour, who was one of the men killed. Because it was known that a manager of the mine was killed, this led to some confusion years later when in a newspaper report in 1936  on the closure of the mine, the report incorrectly stated that it was Mr Morehead who was killed in the accident. (Mr Morehead was not the locally based mine manager, but was the General Manager of the Scottish Australian Mining Company, and was based in Sydney.)

The bodies of the two men were buried in the cemetery beside St Andrews church in North Waratah. (North Waratah was the original name for Mayfield.) In  a 23rd May 1902 newspaper article titled “Where Pioneers Sleep”, the details of the men’s tombstones are documented. The graves stand side by side, and bear the following inscriptions:

Sacred To the memory of  THOMAS MARTYN SEYMOUR. Assistant manager of the Lambton Colliery, who met his death through an accident in that colliery on October 8, 1878, Aged 25.     Much esteemed and regretted.

On the stone adjoining there appears:

Sacred To the memory of ROBERT BROWN, Miner, Husband of Elizabeth, and son of John and Mary Brown, who met his death through an accident in the Lambton Colliery on October 8, 1878,   Aged 23. Much esteemed and regretted.

Although St Andrews church is still there today, the cemetery is not. In 1957 the old cemetery, which had been closed since 1905, was cleared to make a site for the new church hall. In a curious circularity for the men of this story, the headstones in the cemetery were broken up and transported to Blackbutt Reserve to be used as construction materials , thus returning the headstones close to the site where the men met their untimely deaths.

[ There are slightly different stories as to what the headstones were used for – build a drain at the side of a walkway, smashed up to make a rubble drain, used to line paths, used as retaining walls. ] 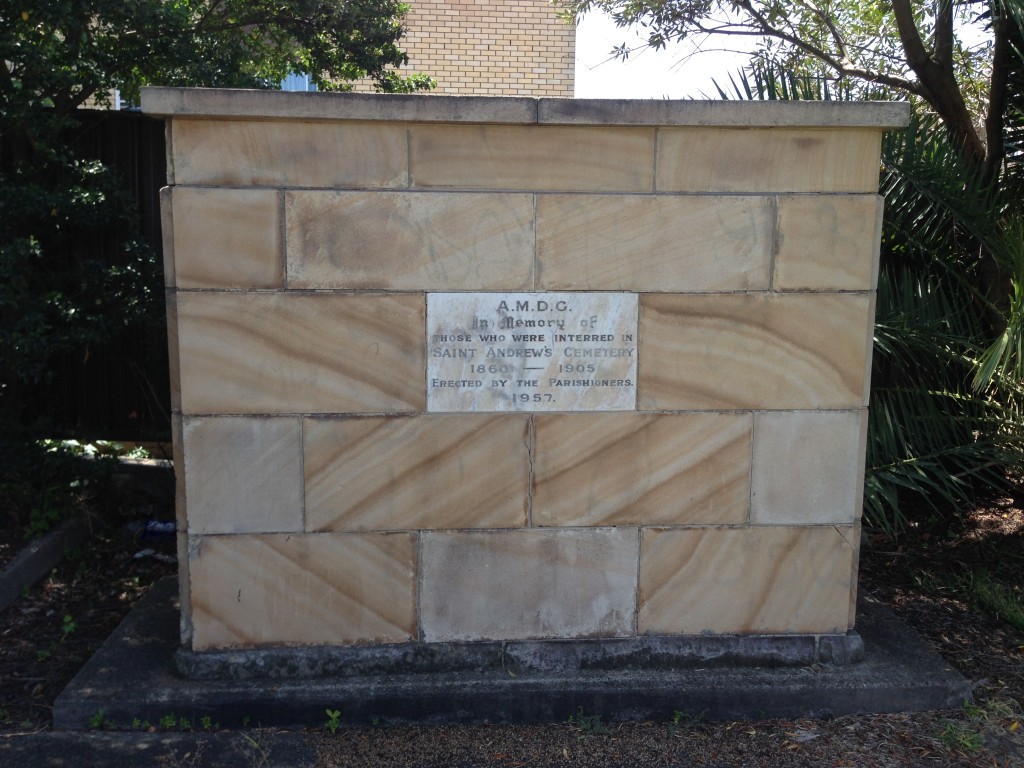 Memorial erected at St Andrews church Mayfield, in 1957 when the cemetery was removed.

In the article I mention that “Mosquito Pit” was also known as “Centre Pit”. Despite the similar meaning name, this is not the same as “Middle Pit”, which was also a shaft of the Scottish Australian Mining Company. At the inquest into the death of Robert Brown and Thomas Seymour, the deposition of William Short to Mr Mackenzie clearly shows that “centre pit” and “middle pit” were two separate shafts …

“at the Lambton middle pit there was a furnace at the bottom, and a brattice in the shaft ; there was much more area behind the brattice at the middle pit than at the centre pit, where the area is only 227 square inches; the shaft in the former case was nine feet, and in the latter only seven feet six inches”

Later on Middle Pit was primarily used as a pumping shaft, to extract water out from the low lying areas of the mine. Ralph Snowball photographed Middle Pit in 1894. Middle Pit was located near the Richley Reserve entrance to Blackbutt Reserve. 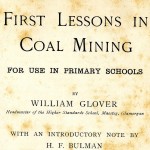 The University of Newcastle Cultural Collections has in its photo archive, scanned pages from a 1906 book “First Lessons in Coal Mining”. This book by William Glover was written “for use in primary schools”, which shows how much our educational curriculum has changed in the last 110 years! The book has a section on pages 70-82 with very good simple descriptions of the methods for ventilating coal mines, including some instructive diagrams. 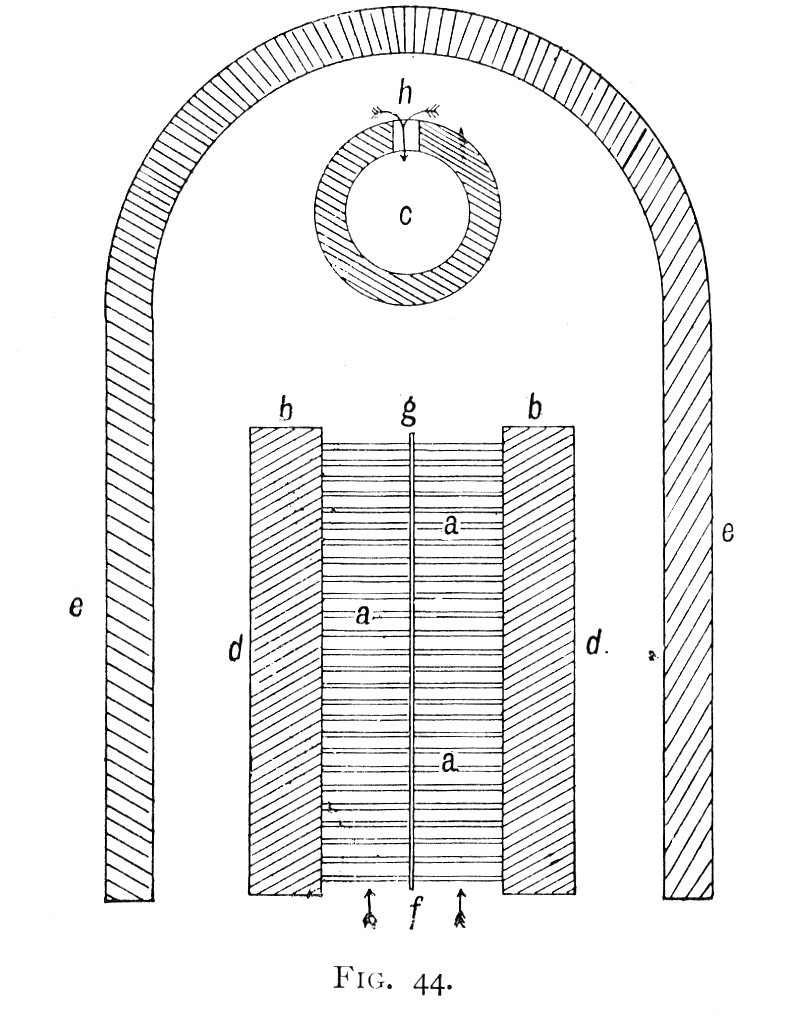 The furnace at the bottom of an upcast ventilating shaft. “First Lessons in Coal Mining” page 71. University of Newcastle Cultural Collections.

In the article, I describe how thermal ventilation is achieved with a furnace at the bottom of an upcast shaft drawing fresh air from other downcast shafts. While this is the usual arrangement, it is also possible to use a single shaft for both the upcast and downcast, by installing a ‘brattice’ down the length of the shaft to divide it into two separate sections. Page 80 of “First Lessons in Mining” describes bratticing as “a kind of coarse, strong, tarred canvas”. In 1878, the Mosquito pit shaft was only recently dug and was not yet connected to other parts of the mine, so at the time of the fatal accident the shaft was “bratticed with wood” and was being used for both downcast and upcast, as evidence from the inquest shows:

“the shaft is about nine or ten feet wide ; the brattice was only from six inches to a foot off the side of the shaft, and was intended for an upcast; the furnace was only an iron fire-lamp, and  about two yards from the edge of the shaft”