The peaceful residential streets of Adamstown today, give no hint of the industrial conflict that nearly boiled over into violence 130 years ago.

In 1888 miners were paid a set price per ton of coal they extracted. Where a coal seam contained thick bands of stony impurities, the miners were effectively paid less, as the same amount of physical labour would win less coal.  The miners of the Newcastle district pressed for the rate to be increased when there was more than 6 inches of impurities. The colliery owners rejected this claim and on 25 August a general strike began. Mining ceased, but the owners wanted to make some money by loading and exporting coal that had previously been brought to the surface. For this work they began using non-union labourers, so called “black-legs”. Opposition to this practice came to a head at New Lambton C Pit, located in Adamstown near present day Clinton Ave.

On Tuesday 18 September, the company sent six men to load coal, accompanied by a force of 30 police officers. Word spread quickly, and over a thousand miners and supporters flocked to the pit to harass the workers and persuade them to desist. Tensions increased and threatened to break out into uncontrolled rioting. Deft handling by police inspector Lynch defused the situation and the day ended with just a single minor injury.

In response, the NSW Governor issued a proclamation that those “interrupting persons in the honest pursuit of their lawful occupation” would be rigorously prosecuted. Military reinforcements were sent from Sydney, and when another attempt to load coal took place two days later, the four “black-legs” who showed up were accompanied by a combined force of 173 police and soldiers who kept the indignant miners at a safe distance.

The show of force had the desired effect and the industrial dispute simmered into stalemate. The strike lasted another two months before agreement was reached, and the miners returned to work on 24 November. 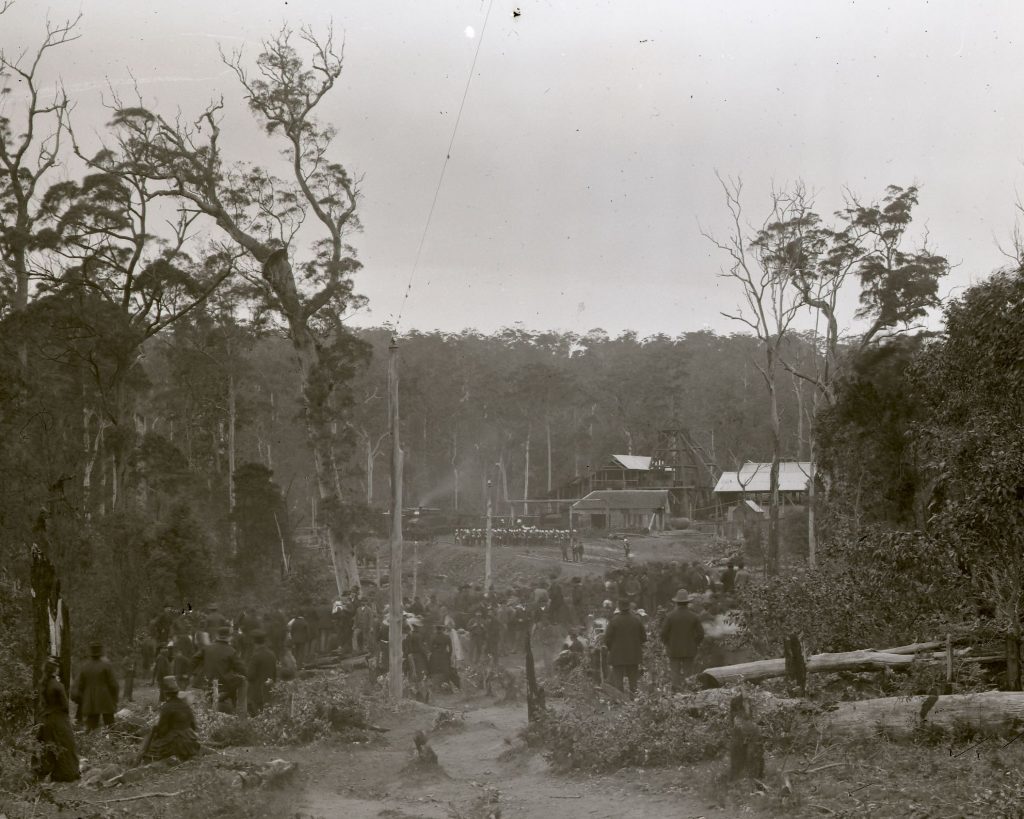 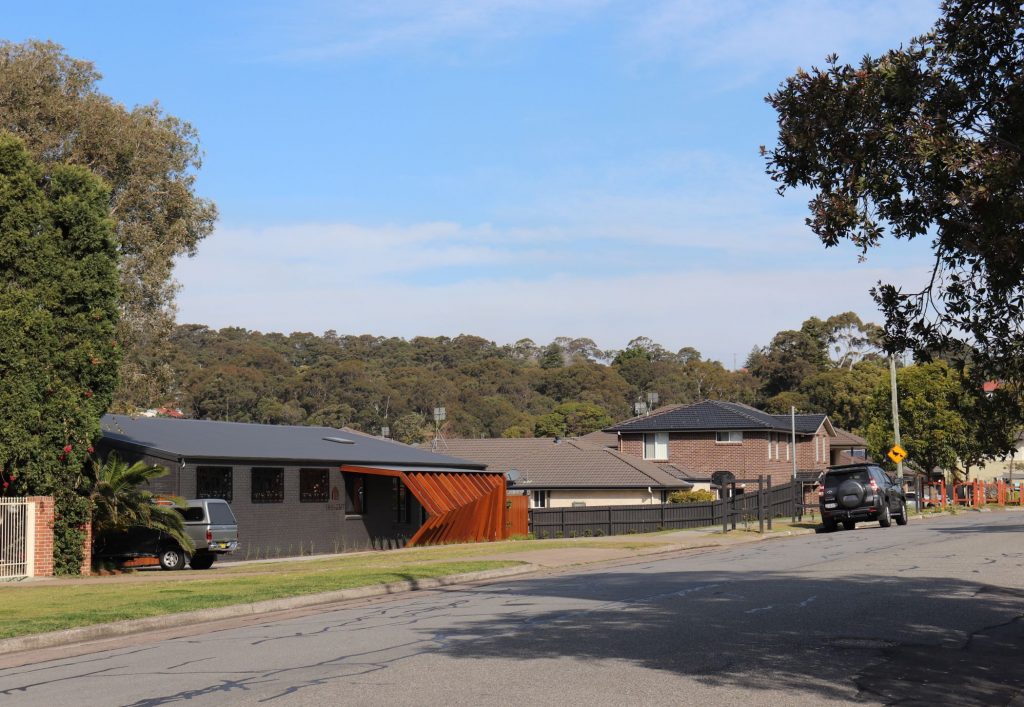 The article above was first published in the September 2018 edition of The Local.

The story of the New Lambton C Pit protest has many interesting aspects to it, which for reasons of space I had to omit from the published story above. One example is the involvement of the military and the deployment of a Nordenfeldt gun.

Late on the Tuesday afternoon as the pit disturbance intensified, Sub-inspector Lynch was concerned that he would be unable to safely remove the black-leg workmen from the site using the 30 policemen he had with him. The Daily Telegraph reported that …

“Sub-inspector Lynch accordingly decided to telephone to Newcastle for assistance and he sent the following message to Inspector Brennan —We are surrounded by a thousand men and cannot get the working men off the ground.”

When Brennan received the message …

“… he immediately communicated with the police magistrate, Mr. Mair and Colonel Spalding. A special train was ordered and as soon as possible 25 of the Permanent Artillery with a Nordenfeldt gun, and under Colonel Spalding and Lieutenant Morris, were taken in the train, as well as 27 constables.

“… and the train to the scene of action passed the one coming from East [sic] Lambton with the coal and the police and laborers.”

On the Thursday when work recommenced at the pit with four black-leg workers, a large contingent of military personnel were again taken out to the pit. The Newcastle Morning Herald reported that …

“The force included eighty-six artillerymen, in command of whom was Colonel Spalding, C.M.G., Lieut.-Colonel Airey, and Lieutenants Morris and Le Mesurier. Lieutenant Morris, who had with him a detachment of the locally-stationed gunners, had charge of a Nordenfeldt gun. This piece of artillery was carried in a goods truck in front of the engine, and the officer and men in charge of it accompanied the weapon.”

Unsurprisingly there was a great deal of concern that a military weapon had been deployed into the middle of an industrial dispute. The Newcastle Morning Herald in an editorial on 20 September 1888 titled “No Nordenfeldt guns wanted” described the gun as …

” … a deadly weapon, which, when in full operation, keeps up a continuous stream of bullets in whatever direction it may be pointed. We understand that this morning a strong reinforcement of the military comes up from Sydney, that the soldiers are to accompany another “small coal” expedition, and that they are to bring up another Nordenfeldt gun with them. We sincerely hope that if they go, they will leave these interesting pieces of death-dealing machinery behind. The democracy of Northumberland is as yet not far enough advanced to regard with equanimity the prospect of being the first in Australia to be experimented on by these interesting specimens of mechanism.” 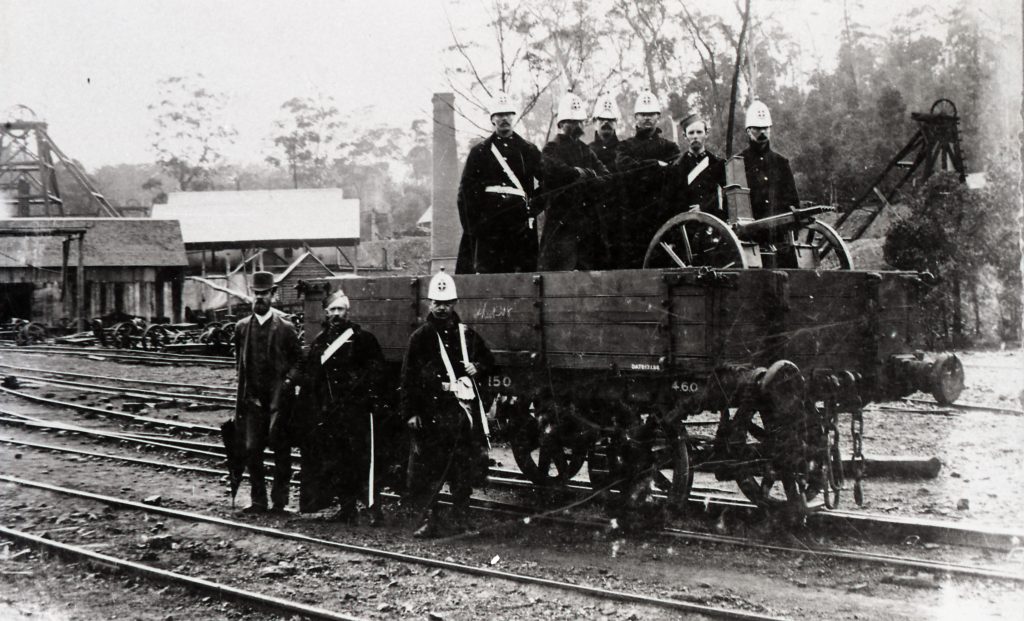 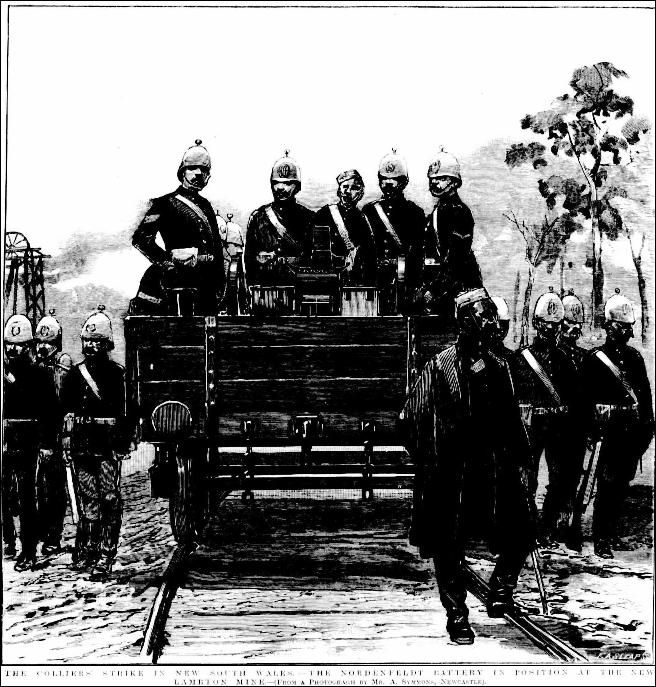 The Nordenfeldt battery in position at the New Lambton mine. (From a Photograph by Mr. A. Symmons, Newcastle). Illustrated Australian News 13 October 1888, page 177 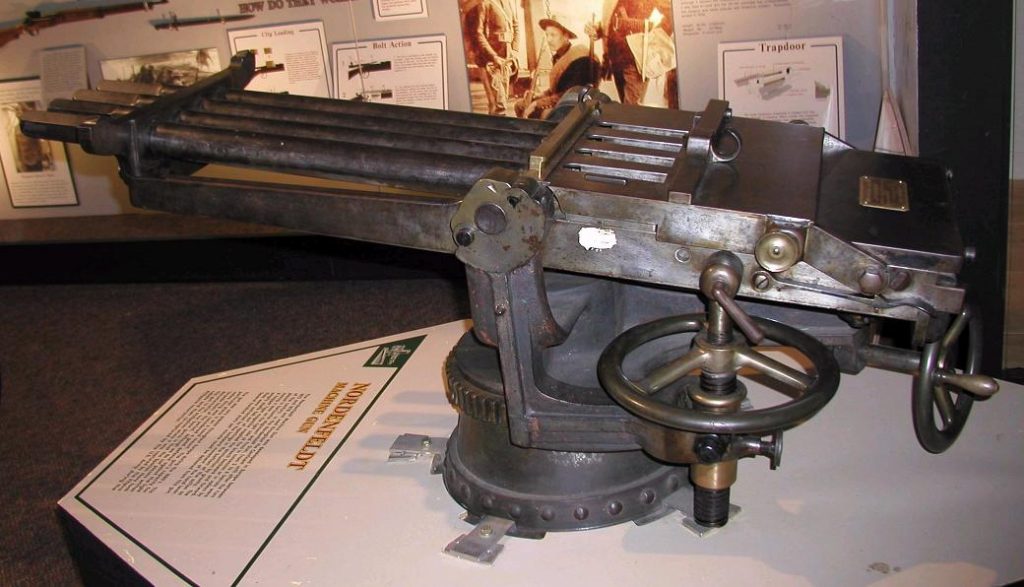 After the disturbance at the New Lambton C Pit on 18 October 1888, the next day the following proclamation was issued and published in the Government Gazette by His Excellency the Right Honorable Charles Robert, Baron Carrington, Governor and Commander-in-Chief of the Colony of New South Wales …

“Whereas certain persons have, by combining and acting together, endeavoured to intimidate and oppressively interfere with certain of Her Majesty’s subjects in lawful pursuit of their occupations as workmen in certain of the coal mines in the county of Northumberland and other parts of the colony; and whereas there is every reason to believe that many of the persons, either guilty themselves of such acts of intimidation and unlawful interference, or countenancing the same by various acts of disorderly conduct, have not duly considered the criminal character of their proceedings or the penalties attaching to their illegal acts, while much concern is felt on account of the recent disturbance to a great industry in the county of Northumberland and elsewhere,and the consequent injury and distress which must inevitably fall upon many families and large classes of unoffending persons: it is nevertheless hereby notified that all persons offending as hereinbefore mentioned, or interrupting other persons in the honest pursuit of their lawful occupations by acts of intimidation or violence, or by disorderly conduct of any kind, will be rigorously prosecuted as the law directs.

“And all persons are hereby warned to desist from such unlawful practices, and all subjects of Her Majesty are called upon to render assistance in protecting any persons from outrage or molestation, and in maintain ing law and order.

“And it is further notified that if any attempt is made to interfere with the lawful pursuits of Her Majesty’s peaceful subjects, the most stringent measures will be adopted to maintain law and to afford complete security to all persons engaged in their lawful callings. “By His Excellency’s command, “HENRY PARKES.”

Impurities in the coal seam

The Evening News on 5 September 1888 ran an article explaining the background to the coal miners’ strike, and included a number of diagrams of coal seams around the district that showed bands of impurities within the seam. These impurities had various names such as ‘jerry’, ‘morgan’, and ‘myrtle’.

The University of Newcastle Cultural Collections site has three Ralph Snowball photos of the disturbance at New Lambton C Pit, each dated only as September 1888. 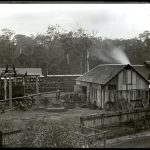 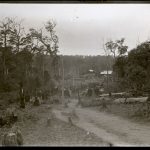 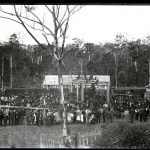 In all the accounts there is only one mention of a photographer, where the Newcastle Morning Herald on 21 September reporting on the previous day’s events noted that …

“The monotony of the task of watching the four men at work was somewhat relieved by the entree of a photographer on to the scene for the purpose of taking a series of pictures for a metropolitan illustrated paper. Groups were formed, and the pictures successfully taken.”

In the following photograph, one of the men in the scene is Inspector Martin Brennan. On the Tuesday, Inspector Brennan only arrived at the mine site after 6pm, which in September is after sunset, so this photo must be from Thursday. 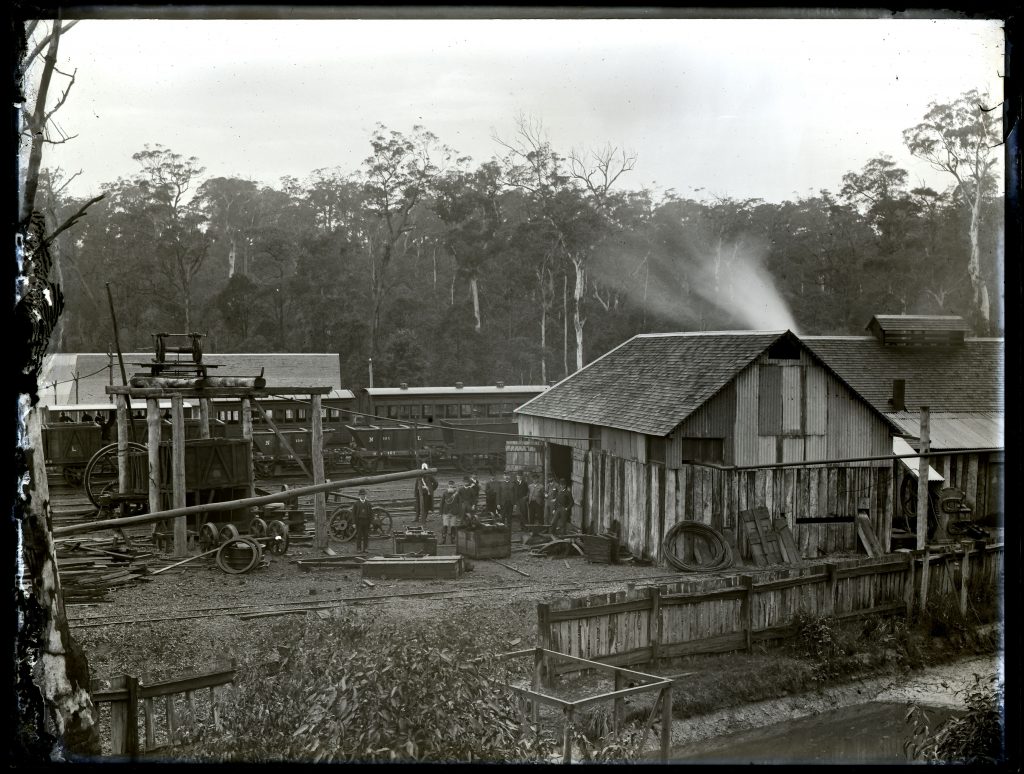 The following photograph shows a line of white helmeted artillery soldiers guarding the mine. On the Tuesday, military support only arrived after 6pm, and once again this suggests this photo is from the Thursday. The picture also aligns well with the report for Thursday that indicates that “the crowd was kept behind the police at the principal entrance, and thus no interference with the blacklegs was allowed or attempted.” 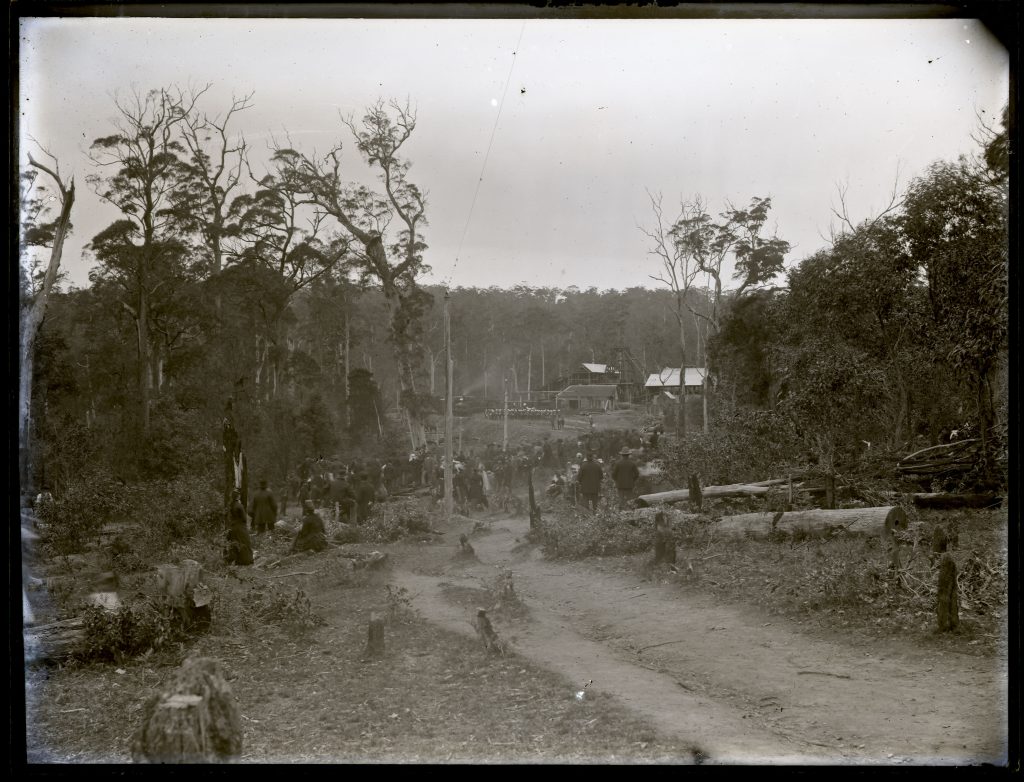 The following photograph shows a group of miners and family surrounding the workshop at the mine. While this could possibly be from Tuesday, I think its more likely to be Thursday. Firstly note that the crowd is quite orderly, and arranged for a posed photograph. Secondly, there is no evidence of any police officials, or black-leg workmen. This doesn’t correspond well with the events of Tuesday where there the tension and conflict continues all through the day until the workmen and the police leave the site by train at about 6pm, when it would have been quite dark.

In contrast, on the Thursday the black-leg workmen, and the police and soldiers left at about 4:30pm and afterwards it was noted that

“A few privileged stragglers were permitted to enter the sacred precincts of the closely-guarded arena, but everything, with a slight exception, passed off quietly.”

It seems more likely that the posed photograph below was taken late on the Thursday after the workmen and officials had departed. Although it may seem strange to describe the several hundred people in the photo as a “few” stragglers, it is understandable given that the same report earlier stated that the number of protesters that day “must have been considerably over 6000.” 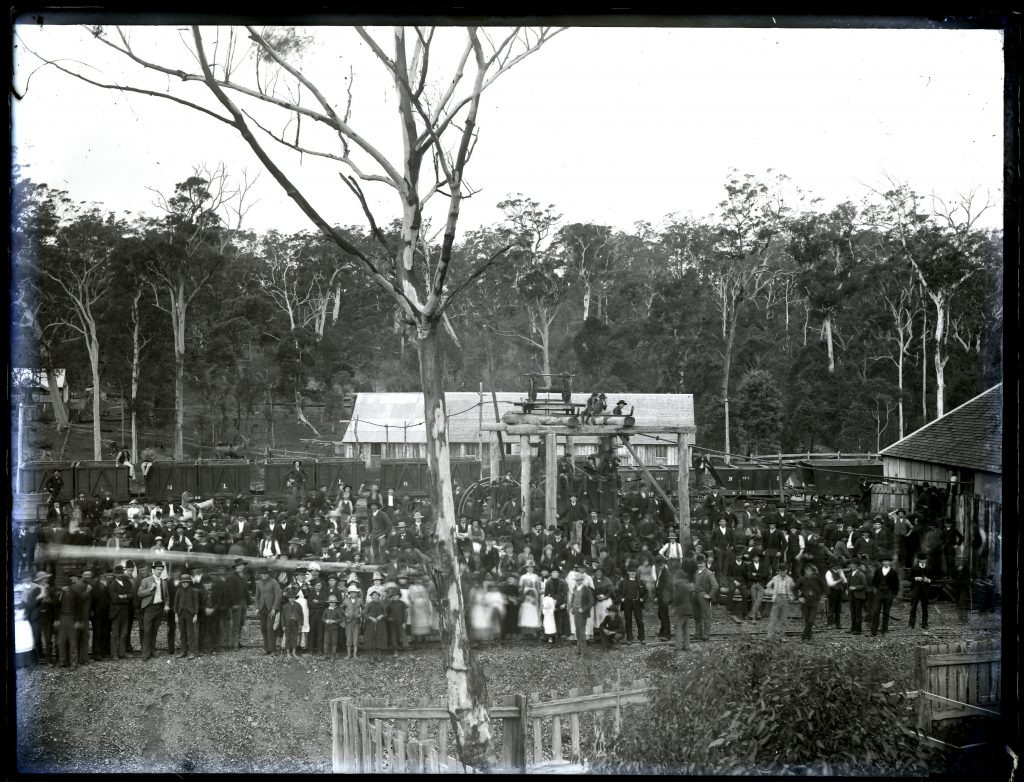 A map in the National Library of Australia shows the layout of the New Lambton C Pit, and I have marked on the map below the approximate locations where I believe Snowball’s photographs were taken from. 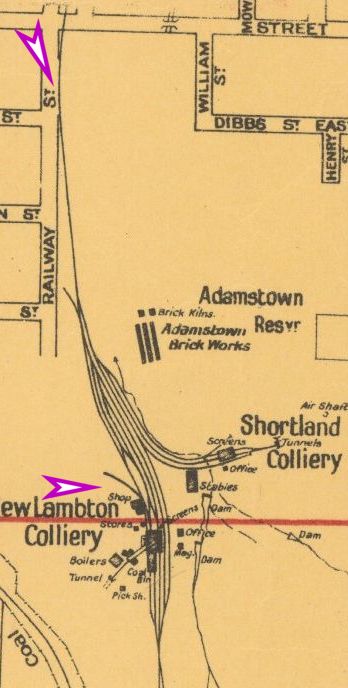 The Australasian (Melbourne) newspaper, on 6 October 1888, printed a number of drawings of the New Lambton C Pit disturbance, seemingly based on Snowball’s photographs. 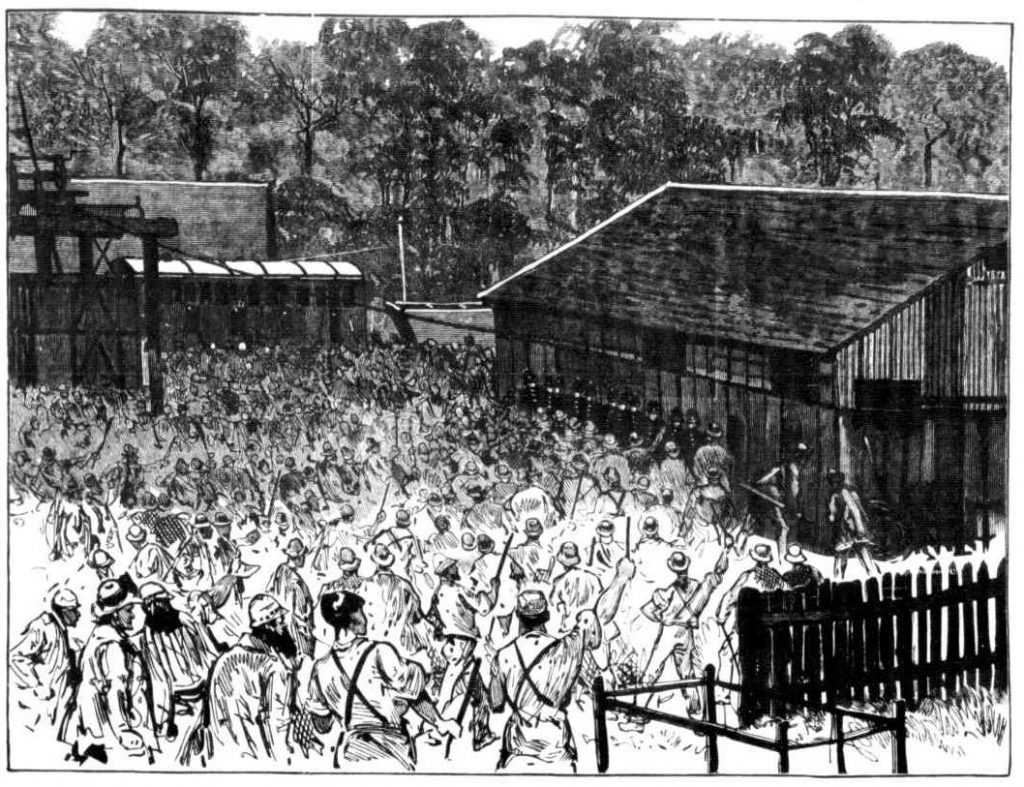 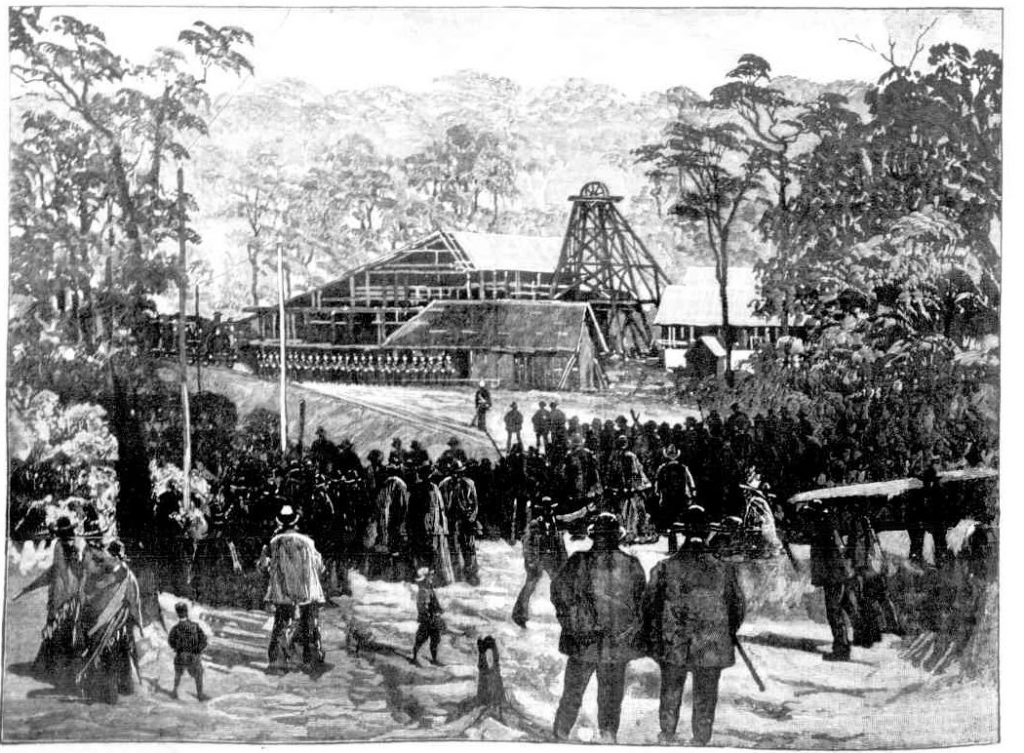 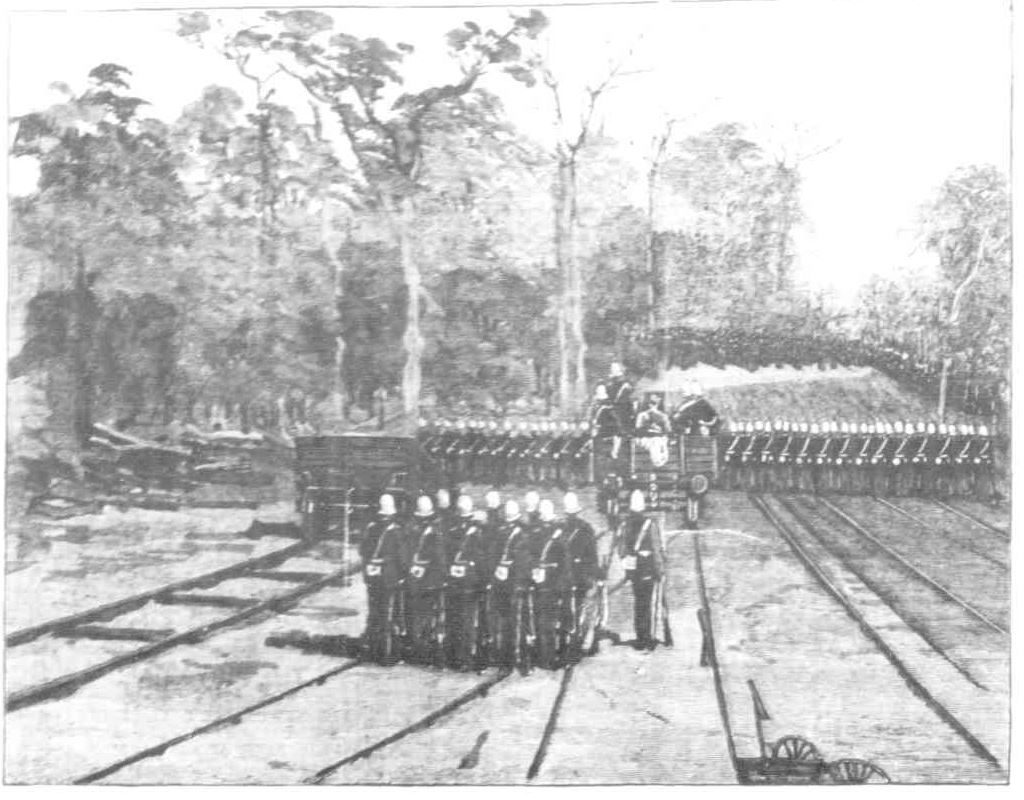 Martin Brennan was born at Kilkenny, Ireland in 1848, and at age 40 was the Inspector of Police in Newcastle at the time of miners’ strike in 1888. The Evening News of 4 October 1888 ran a story on Martin Brennan with some biographical details, and praising his qualities …

At Newcastle he has more than sustained his previous reputation as a firm, discreet, and zealous public officer. The manner in which he has discharged his duties at the present critical juncture has won for him the highest praise, both from the miners and the general public.

The article also contained a line drawing of Inspector Brennan, and from this we may reasonably guess that he appears in one of Snowball’s photographs. 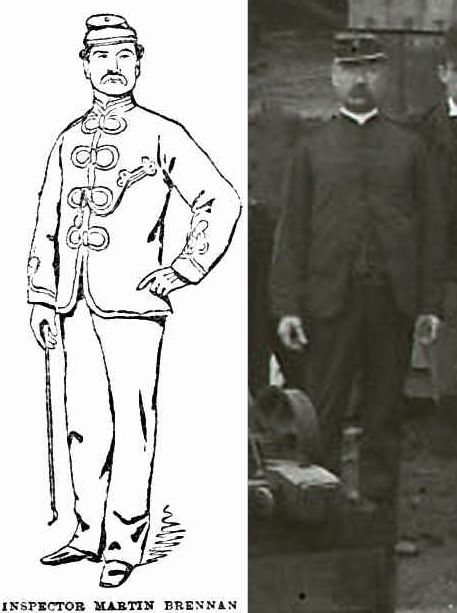 The Braidwood Times website has a studio photograph of Martin Brennan. 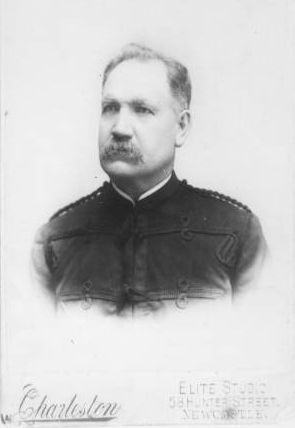 Although his face looks more round in the Ralph Snowball photo, I think the roundness is exaggerated by the low resolution and the cap. When you snip the cap from the pit photo and place it on the studio photo, the resemblance is reasonably clear. 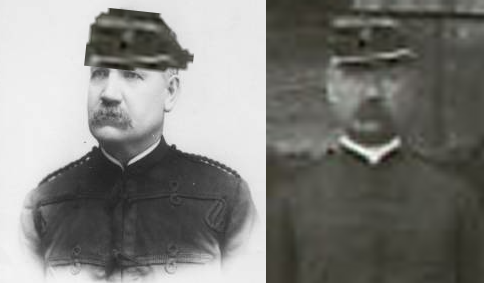 In an article from 17 September 1904 on his promotion to Superintendent, First Class, it is noted that  Brennan …

“… was promoted to Newcastle in 1886, as Inspector where he remained for about seven years. His duties there during the great coal and maritime strikes of 1888 were onerous and responsible ; nevertheless, he, with Sub-Inspector Lynch’s assistance, discharged them in such a manner as to merit the approbation of mine-owners and miners, as well as the public generally.”

Martin Brennan retired from the police force in January 1907 after 48 years of service, at the time a record exceeded only by his brother Patrick. Martin Brennan died in St Vincent’s Hospital Sydney on 8 August 1912, aged 73.