The origin of the name may be uncertain and the precise location unknown, but the “Dog and Rat” pit was once a celebrated colliery of the East Lambton area. In 1862 James and Alexander Brown obtained a 280 acre mining lease south of Waratah, and in 1866 opened the unremarkably named A Pit and B Pit. By 1871 however, the southern pit was known as the “Old Dog and Rat”.

There have been several explanations offered for the name, that it is rhyming slang for “Griffiths’ Flat” or because miners took their dogs underground to hunt rats. The likely explanation is that it derives from the sport of rat coursing. The earliest report on the origin of the name notes that

“although the area was a dense bush, with swampy ground on either side, quite a number of men could obtain a day’s sport with their dogs hunting the rats.”

The name of the pit also attached to the road leading to it. What is now Young Rd was previously known as Dog and Rat Rd.

The pit ceased operation in 1884, although there were a few later attempts to extract remnant coal. It is last mentioned in the Department of Mines annual report of 1893, where

“David Hughes gave notice that he had ceased all work at the Old Dog and Rat, and filled up all shafts.”

The colliery was gone, but the name hung around. In 1925 the East Lambton Progress Association wrote to the Council requesting that the name “Dog and Rat” be discouraged. The Mayor responded that as it was not an official name, there was nothing to be altered.

Where was the pit? Three pieces of information give us a clue. An 1871 report indicates that it was within the Lambton Municipality, which places it north of Womboin Rd. An 1874 report states that it was south of Lambton to Hamilton road. Finally, the western boundary of the Brown’s lease means it was located somewhere in the triangular area below. 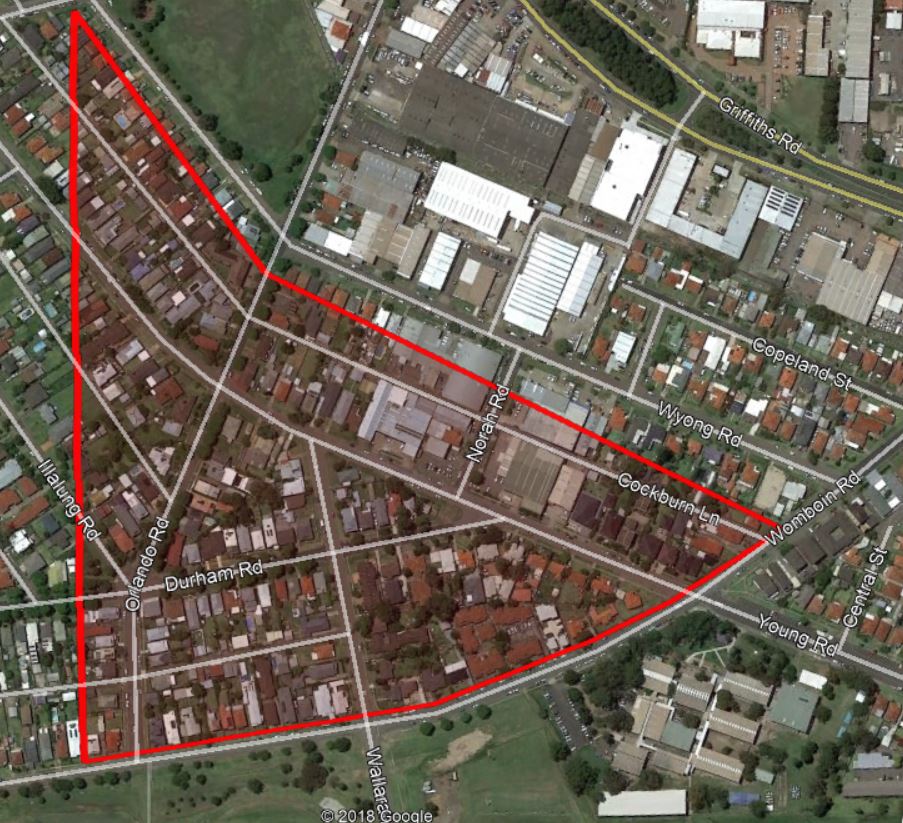 The Dog and Rat pit was located somewhere in this triangular area of East Lambton. Google Earth. 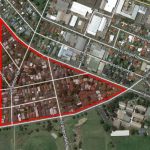 Update, January 2019: In the originally published article I stated that the pit was located south of Young Rd. After more research, I am of the opinion that it was located just to the north of the present day Young Rd. See below for further details. 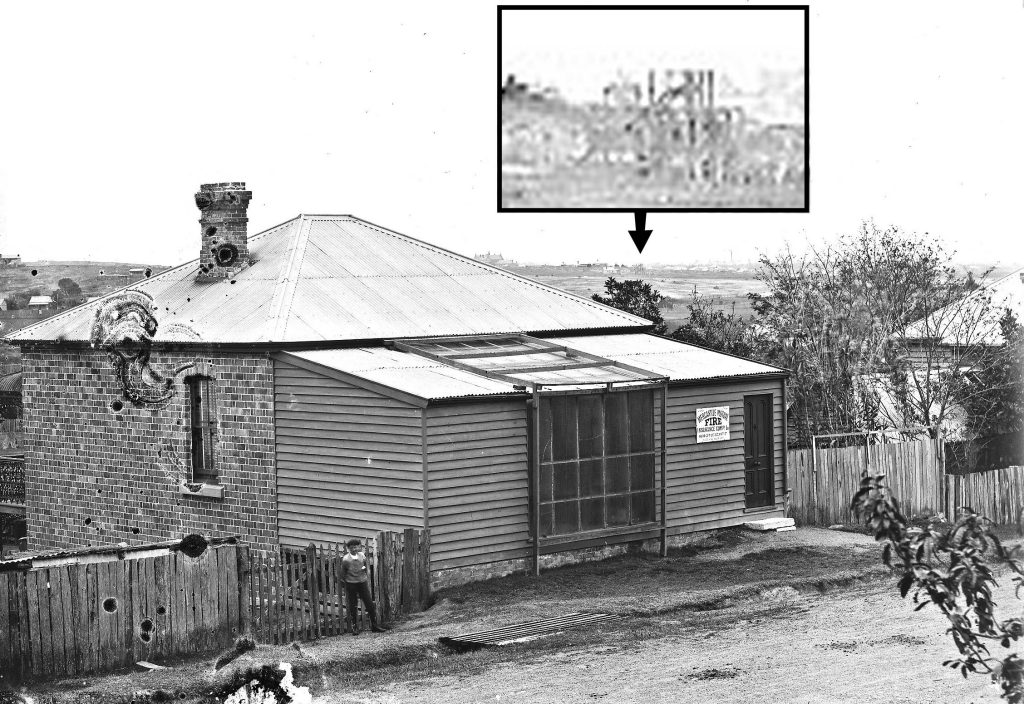 The article above was first published in the May 2018 edition of the Lambton & New Lambton Local.

Location of the pit

Three pieces of information constrain the location of the “Old Dog and Rat” pit to within a triangular area of East Lambton.

“for the purpose of bringing forward from amongst them the most fit and proper persons to be nominated as candidates for the office of aldermen in their newly-appointed municipality.”

“Mr. Hindmarsh objected to Mr. Hardy asking any questions, he not being an elector. Mr. Hardy said that he resided within the proclaimed boundary, viz , at the Old Dog and Rat Pit, of the Messrs. Brown, inside of the Lambton railway. The Chairman ruled that he (Mr. Hardy) was an elector.”

A map from a 1906 real estate poster shows that the municipal boundary ran along the Lambton colliery railway adjacent to present day Womboin Rd. Also the phrase “inside of the Lambton railway” suggests that the Dog and Rat pit was to the north of the curved section of rail line. 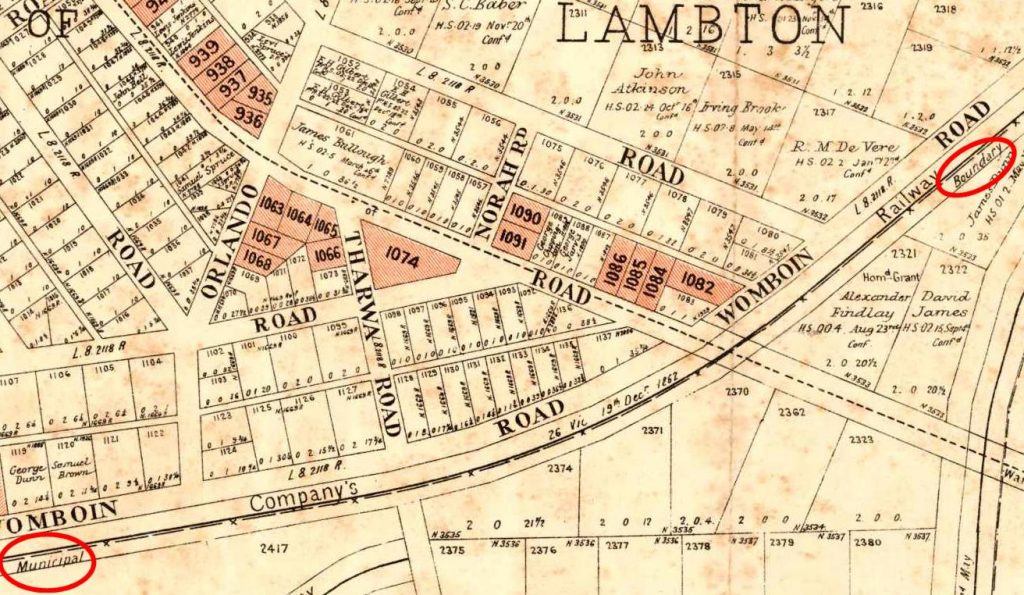 In the 1870s when there was a push to get a main road built from Newcastle to Wallsend, there was much dispute about the route that it should take. There were two competing proposals – a southern route that passed through New Lambton (Lambton Rd) and a more direct northern route that approximately followed the line of Young Rd.  On 6 May 1874 Thomas Croudace, an advocate for the southern route, wrote a letter to the editor comparing and contrasting the two proposals. Compare his description of the northern road with the annotated map below.

“The route upon leaving Hamilton1 proceeds north-westerly over the BroadMeadow Swamp2, across the New Lambton3 and Lambton railways4, between the old Dog and Rat Pit5, and New Lambton Smelting Works6, to the ridge whereon old Peacock lives7, and thence to the dividing line of Lambton and Grovestown townships.” 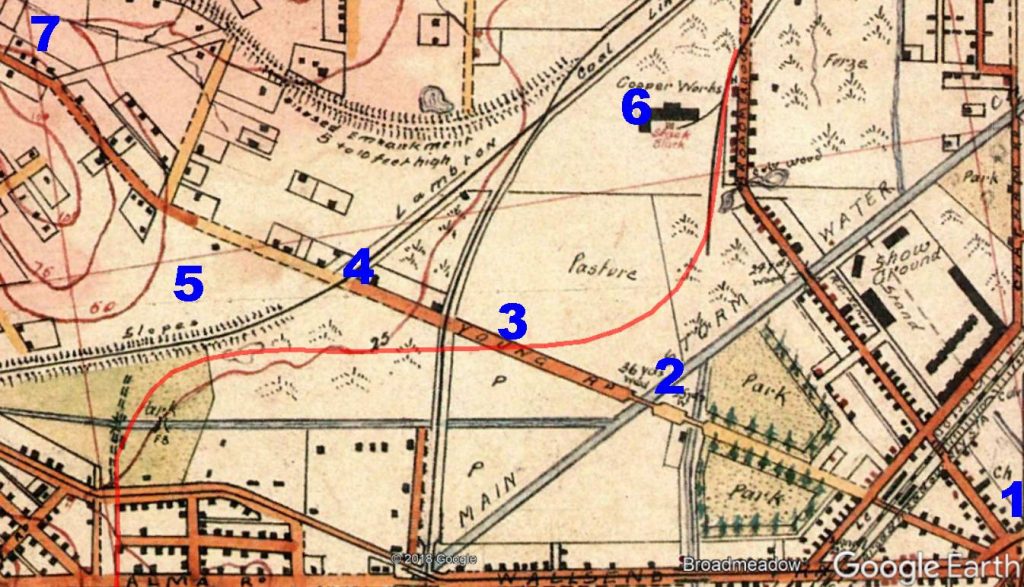 Thomas Croudace’s description of the proposed northern route of the main road.

The “New Lambton Smelting Works” was located in present day Broadmeadow, so therefore the Dog and Rat Pit must have been to the south of proposed northern route.

I originally believed that the northern route that Thomas Croudace described was identical to the line of present day Young Rd, but I no longer think so. A 1944 aerial photograph of the site shows not much evidence of a former pit head to the south of Young Rd, but reveals a more likely site to the north of Young Rd, near Norah Rd. 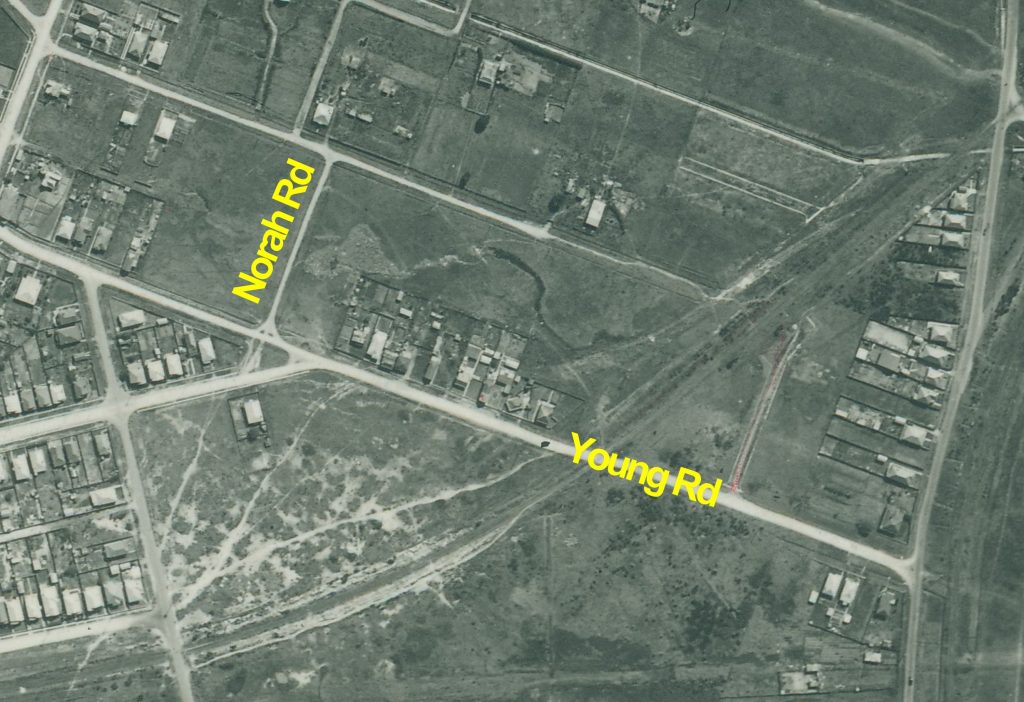 A 1944 aerial photograph of the site of the Dog and Rat Pit.

There is suggestive evidence that the proposed line of road described by Croudace in 1874 is not the exactly the same as Young Rd. In 1876, two years after the road had been gazetted in May 1874 it appears that there was still confusion about where the road would run. In a Lambton Council meeting on 22 Feb 1876 it was moved

“that a letter be sent to the District Surveyor, asking him to point out the line of road from the Lambton township to the Lambton Company’s railway crossing  … as there seemed to be some doubt as to where the road would cross.”

Also in 1893, Major Parrott’s map of the area shows the road crossing the Broadmeadow swamp from Lambton to Hamilton at a slightly different angle and just to the north of the present day Young Rd. (Note that on Parrott’s map, the dashed line marked as “Water Pipes” is the line the road eventually took.) 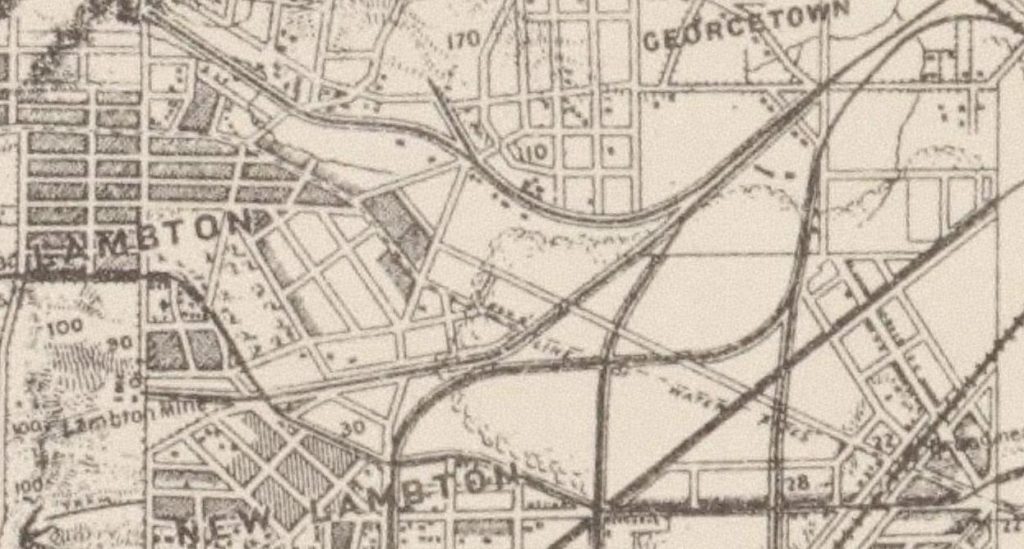 Overlaying the Parrott map and the 1944 aerial photograph into Google Earth shows that the possible site of the Dog and Rat pit near the intersection of Young and Norah Rds is to the south of the road marked on Parrot’s map. 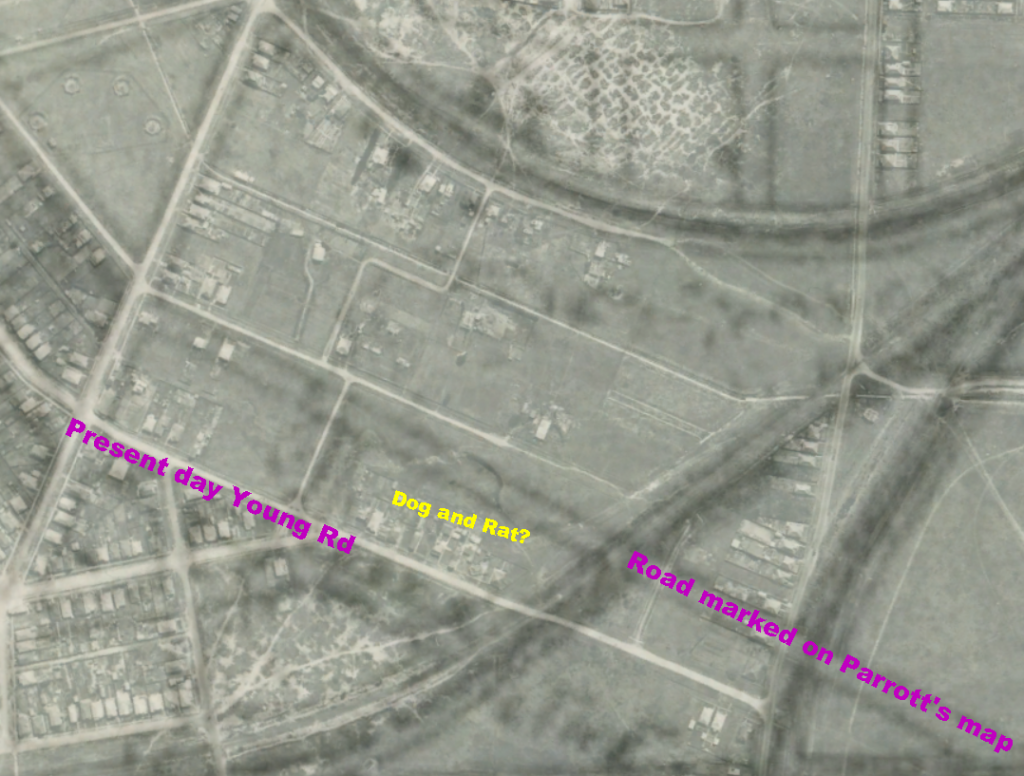 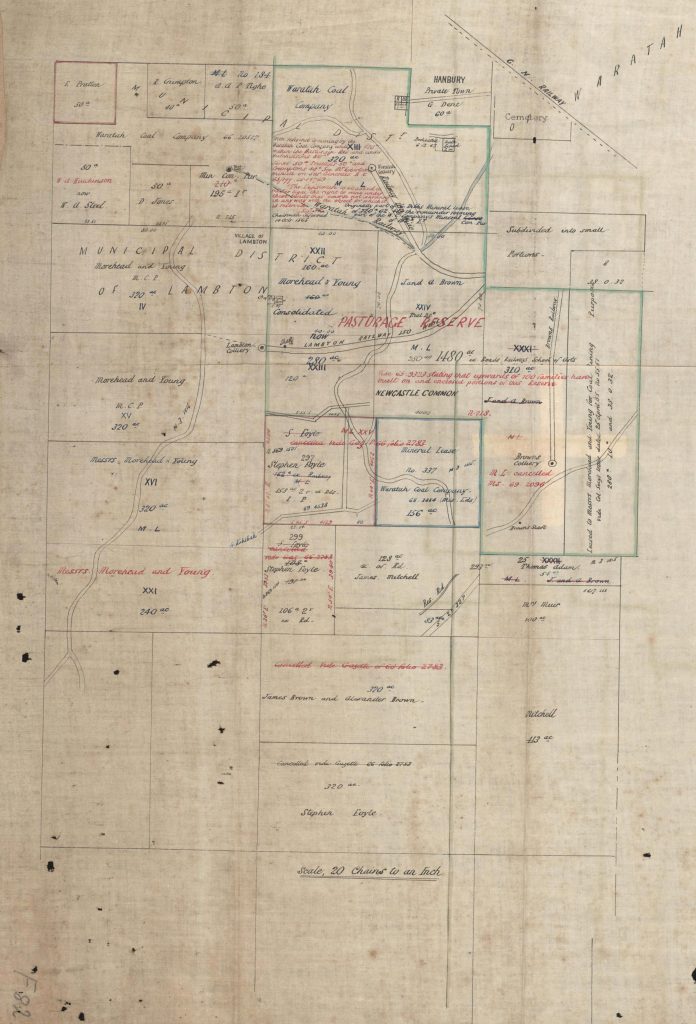 When overlaid into Google Earth, this establishes the western boundary of possible locations for the Dog and Rat Pit. 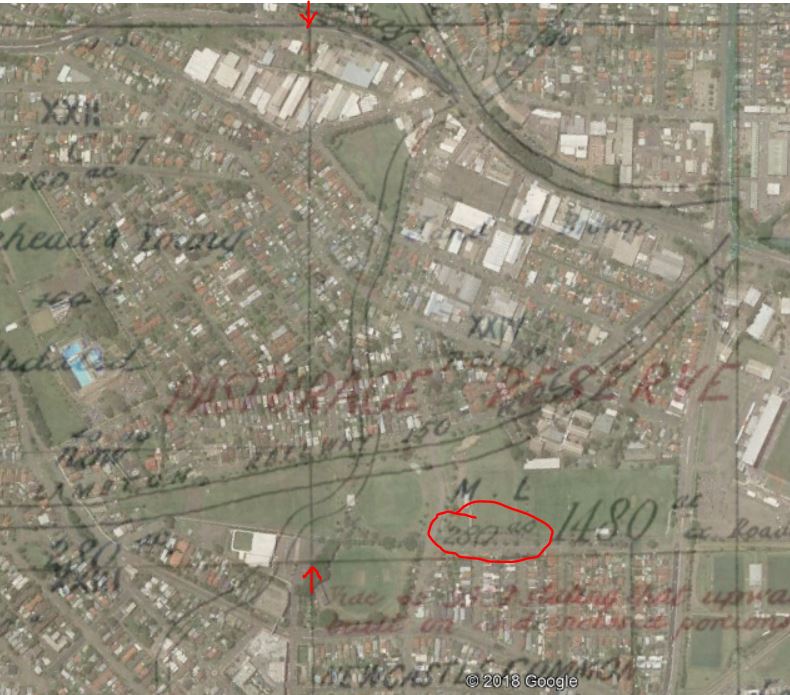 One of the difficulties that James and Alexander Brown faced with their 280 acre mining lease was that the Scottish Australian Mining company’s railway to Lambton colliery (shown in red in the map below) divided the Brown’s lease into two portions. This presented the problem of how to get coal extracted from the B pit to the Brown’s New Lambton railway (shown in blue in the map below.) 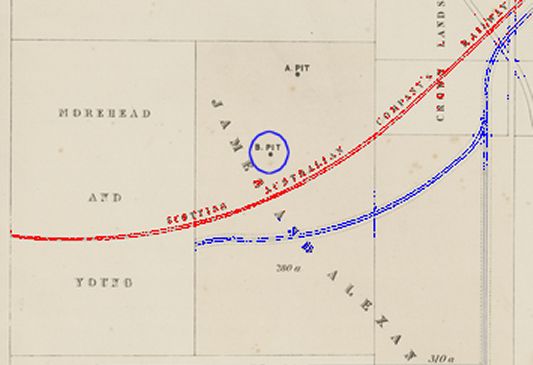 There was fierce competition and intransigent lack of co-operation between the collieries at that time as reported in the Empire newspaper of 2 September 1867.

The Waratah and Lambton collieries have been for several years accomplished facts, each colliery having its own separate line of railway connecting the colliery with the Great Northern Railway, and in the instance of Waratah with its own port of shipment. When these railway Acts were passed, we thought that great care was exercised to make them public railways instead of of private ones, and that points and crossings should or could, be laid into them at any place, a neighbouring coal proprietor might require them, whereby to take his coals to Newcastle — in fact, to market in New South Wales. But no, some technicality sufficiently feasible, stands up, and is apparently powerful enough to prevent any interference with existing lines of railway, public or private, with out another specific Act of Parliament.

The Scottish Australian Mining Company would not allow a competitors railway to crossed their own line, so the Browns resorted to an ingenious solution.

The Messrs. Brown have coal bearing land between Lambton and Waratah, which they cannot work without passing from the Lambton railway, or going under it to their own Hartley Vale railway. Having waited two years to get an Act passed to amend the Amended Railway Act with out success, they have apparently taken the law coach into their own hands, and will drive it, not through the Act, but under it : so they have commenced operations by driving a dip tunnel from their own land, intersecting the Lambton railway at an angle of forty-five degrees, but so much below it as to leave it perfectly secure, even to the most fastidious.

This rail tunnel is also referred to in another article in Empire from 3 December 1867, reporting on the opening of a section of the New Lambton/Hartley Vale colliery railway.

The line further leads to a pit on the other side of the South Australian Company’s Railway, underneath which a tunnel has been made.

The location of Brown’s rail tunnel under the Lambton colliery line is not marked on any maps, but given the location of the Dog and Rat Pit, the tunnel was probably somewhere in the vicinity of the modern day intersection of Young and Womboin Roads.

The undated Ralph Snowball photo is of his house and studio at 19 Clarence Rd New Lambton, looking towards the north east. On the horizon, a colliery head frame (1) can be seen between two identifiable features – the Waratah Benevolent Asylum (2) on the left, and the chimney of the New Lambton Copper Smelting Works (3) on the right.

Replicating those angles as lines in Google Earth, we see that the middle line passes directly over the triangular area in East Lambton where we know the Dog and Rat pit was located. So although we can’t know with 100% certainty, it is highly probable that the colliery head frame in the photo is that of the old Dog and Rat pit. 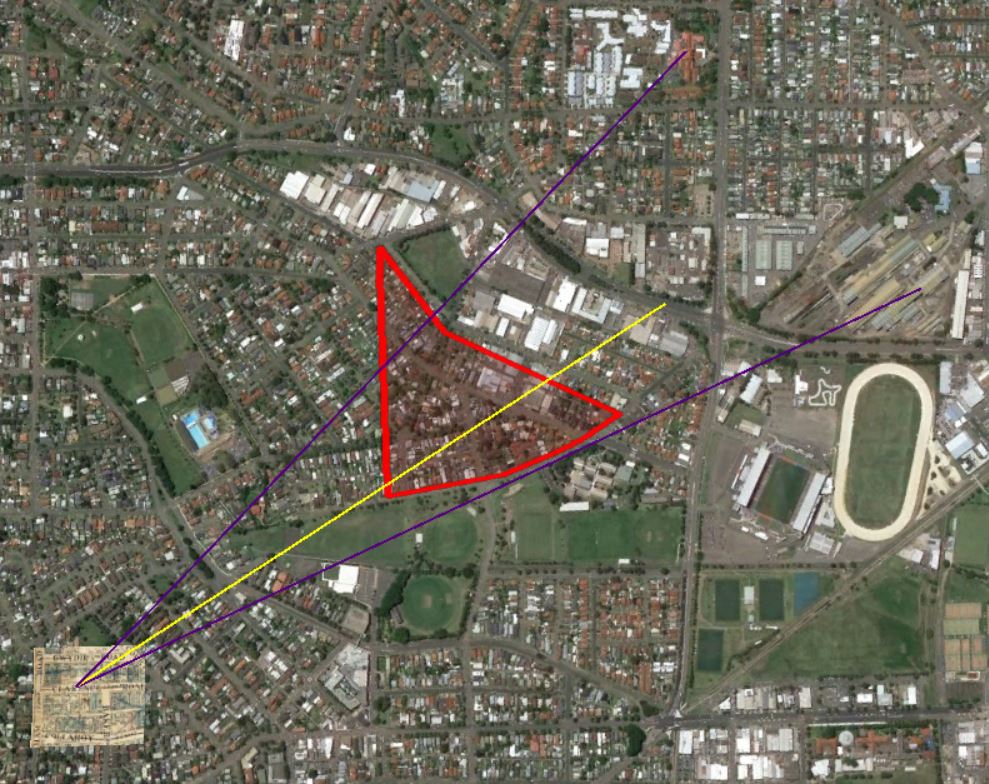 The NSW Department of Planning and Environment, Resources and Geoscience section, has an online archive of historical mining documents in their Digital Imaging Geological System (DIGS) . A number of the annual reports in the archive include references to the Dog and Rat pit.

1 thought on “Dog and Rat Colliery”