It was reported as “the largest demonstration that had ever been held at Lambton” with the crowd numbered “upwards of 2000.” The occasion was the return to Lambton of Lieutenant Albert Henry McEwan from the South African Boer War.

Albert was born in Lambton around 1877 where his father John worked as a miner. In the 1890s a downturn in the coal trade induced many to leave the area and seek work elsewhere. In October 1895, John along with his eldest son Albert, still a teenager, headed to the booming gold fields of South Africa. Both father and son quickly found employment in the “Simmer and Jack” mine at Johannesburg.

Within a year John was tragically killed in a mining accident. Albert stayed on and rose to a responsible position in the mine. When war broke out in 1899 between the British and the Boers, he joined the Imperial Light Horse and was soon engaged in a number of battles. Describing these in letters home to Lambton, he wrote with patriotic bravado but also noted “the appalling sights of a battlefield are simply terrible”. In 1901 Albert was shot in the leg. He was treated in South Africa, before being taken to Netley hospital in England where his leg was amputated.

Albert returned to Australia and arrived back in Lambton in the afternoon of 14 April 1902. At 7pm a torchlight procession marched down a gaily-decorated Elder St to Bell’s Hall at the corner Morehead St. “At every corner the returned soldier was greeted with loud cheers.” He made an appearance on the balcony and addressed the crowd in the street below, before being entertained at a banquet in his honour.

Ralph Snowball’s photograph from this day is not only a snapshot of the streetscape of Lambton in 1902, but also an indication of the colonial fervour for the British Empire that would propel many more Lambton boys to the fields of the Great War in Europe 12 years later. 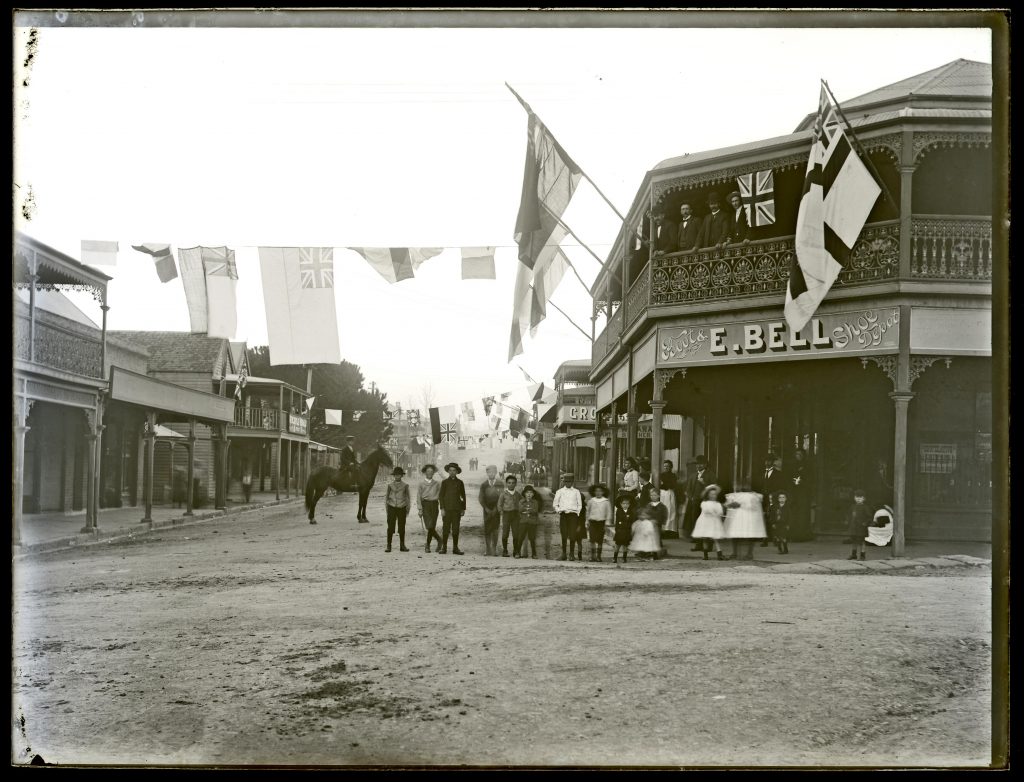 14 April 1902 – A decorated Elder St in readiness for the torchlight parade to honour Lieutenant McEwan later that evening. Photo by Ralph Snowball.University of Newcastle, Cultural Collections.

The article above was first published in the August 2018 edition of The Local.

Mine work in South Africa

In the newspaper article on 14 February 1902 reporting his wounding, it is noted that Albert McEwan was …

“a native of Lambton, and the eldest son of the late John McEwan, and went to South Africa about six years ago. When war was declared he held a responsible position as first amalgamator for one of the largest mines in the Rand.”

The amalgamator at gold mines prepares amalgamation plates to receive the gold-bearing pulp from stamps. He regulates the flow of water and ore, and at regular intervals collects the mercury-gold amalgam from the mortar, sluices, and plates.

The National Archives( London, England), has scanned the nominal rolls for the Imperial Light Horse Brigade, which contains an entry for Albert Henry McEwan.

His enlistment date of 25 September 1899 was some two weeks before the Boer Republics declared war on 11 October 1899.