Sometimes my “Unanswered Questions” get answers …

Q. Where exactly is “Peacock’s Corner”?

A. Portion 810 of the Newcastle Pasturage Reserve, adjacent to the old courthouse. This is now the area of land bounded by Newcastle Rd, Lloyd Rd, and Dickson St.

Q. Did Lloyd Rd ever cross where Lambton Park is now?

Q. When the plant from the Electric Lighting Station was sold off by the bank in 1904, who was it sold to and what became of it?

A.It was bought by the Caledonian Coal Company and sent off to the Killingworth and Mt Kembla collieries.

Q. What is the rectangle in this map? 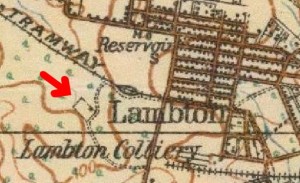 A. It’s the nightsoil paddock, or “Sanitary depot” – where the contents of outhouses were dumped. 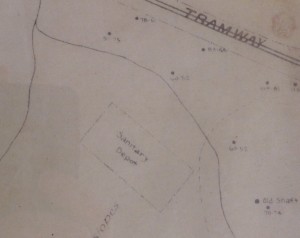 This 23 Oct 1903 newspaper article describes the sanitary service that is about to be implemented.

Q. Where is Paddy Lewis dam?

A. In a gully below John Hunter Hospital. 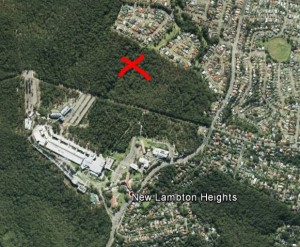 Q. What is the earliest source material for the story of how the Brown’s obtained the New Lambton coal lease after Morehead and Young inadvertently let their lease expire?

A. In  newspaper article on 4 Jan 1868, the Wallsend correspondent says

I hear that the Messrs. Browns have been fortunate enough to lay hold of another coal-field which formerly belonged to Dr. Mitchell, who let it slip through his fingers by not keeping his payments good, in which state of affairs Messrs. Morehead and Young went and secured this valuable piece of ground. After holding possession of it for a long time, they, like the doctor, neglected to make the payments good. The Messrs. Browns being made aware of the fact, Mr. A. Brown at once proceeded to the Government and found things just in the state he had been informed they were in. He then deposited the whole sum of money, which was sufficient o buy the ground right out, with the mineral right. After the transaction had been finished, Mr. A. Brown took his departure, and as he was coming out of the door he met Mr. Croudace and Morehead going in, who bid each other the compliments of the morning in a highly respectable and gentlemanly manner.

Q. Where in Blackbutt Reserve was the Mosquito Pit?

A. See the Mosquito Pit article.