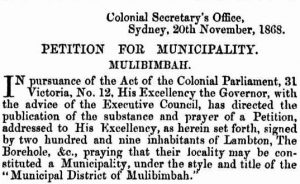 In November 1868, a petition of 209 inhabitants of Lambton and The Borehole (Hamilton) was presented to the Governor calling for a large municipality extending east to west from Newcastle to Jesmond, and north to south from Lambton to Kotara South. The municipality never eventuated because there was a counter-petition submitted in February 1869 signed by 248 people opposing the establishment of the Mulibimbah municipality.

The reason for the opposition was …

“That owing to the majority of inhabitants being residents on sufferance, upon the Town Commonage land of Newcastle, they would have to pay all rates, without the slightest prospect of any improvement … many persons were induced to sign the Petition by misrepresentations, and now regret having done so.”

Using the description of the municipality from the initial petition, I have shaded the proposed area in Google Earth as shown below, with the Commonage (Newcastle Pasturage Reserve) outlined in red. Note that the Mulibimbah area is indicative only, not authoritative, as the description in the petition of the area (particularly regarding the southern border) is a bit vague.