In a post earlier this month I used the word “ambivalent ” when talking about iTunes upgrades. A lot of people think of “ambivalent” as meaning not having a strong feeling on some matter. More correctly, ambivalence is when you have two conflicting feelings at the same time. 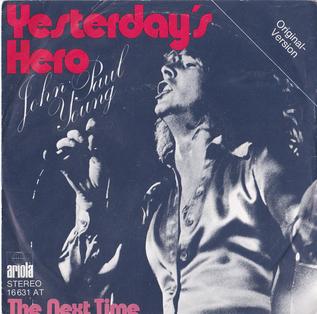 So when I was in Bunnings the other day and John Paul Young’s “Yesterday’s Hero” is played, I am both simultaneously delighted to be hearing my favourite song of 1975, (and knowing that JPY will be collecting a few cents more in royalties), but at the same time disgusted that a retail behemoth is trying to mess with my mind and affect my buying behaviour. Ambivalence.

Now in a curious coincidence an interview with JPY appeared in the Newcastle Herald today, in which he recounts how he was in Bunnings the other day and was recognised, but only as someone “who looks like John Paul Young.”