With a modern smart phone in our hands we can easily and at negligible cost snap high-resolution pictures and instantly send them around the world. It’s a vast difference from the rigours and expense of photography in the late 19th century when Newcastle’s celebrated early photographer Ralph Snowball worked.

This month marks 95 years since Snowball’s death in August 1925. He was born in 1848 in Leadgate, Durham (UK), where he worked as a miner before coming to Australia and settling in New Lambton around 1879 to work at the Lambton colliery. An accident meant he could no longer continue in mining, and he took up photography in 1885. He established a studio at his home in Clarence Rd, where his work included portraits and visiting cards. He also travelled extensively in a horse drawn wagonette, carting his bulky equipment to capture landscapes, buildings, and public events, sometimes selling his work for publication in newspapers.

In 1887 Snowball set up a studio in Hunter St Newcastle, near Market St, where he was well placed to document the bustling harbour city and sell his services to visiting sailors.  In 1888 he referred to the rigours of his trade, writing “My work keeps me from home from 8am to 7pm, and sometimes later.” This must have been a huge strain on his wife Mary, at home raising eight children.

Snowball was an active participant in civic affairs, and was appointed the first town clerk of New Lambton in 1889. He also served in a number of churches and friendly societies. He retired from photography around 1912, and died in Wallsend Hospital on 4 August 1925, aged 76.

Snowball’s glass plate negatives then remained in the cellar of his Clarence Rd home, forgotten for over 60 years until rediscovered in 1988.  The bulk of his collection is now held by Newcastle Library and the University of Newcastle, providing us today with a priceless legacy of thousands of detailed pictures of our past.

The article above was first published in the August 2020 edition of The Local. 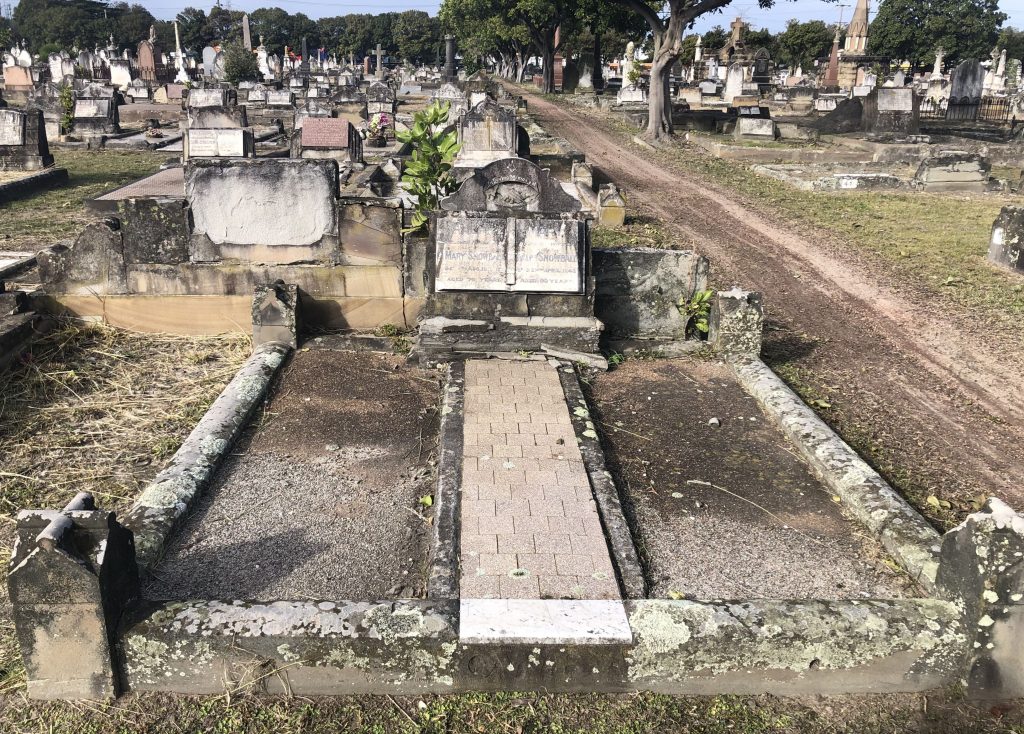 Headstone of Ralph and Mary Snowball

In 1887 Ralph Snowball set up a photographic studio in the Newcastle Borough Market Building in Hunter St Newcastle. The foundation was laid in 1870, and the building opened in December 1871. The building was located at 121 Hunter St. It was demolished in September 1915, and a picture theatre erected in its place.

Many years later, the “Market Square” building was erected on the site.

It is unclear how long Ralph Snowball had his Market Studio in Hunter St, but it would seem that he vacated prior to 1901. In the 1901 Federal Directory of Newcastle and District, Snowball is not listed among the photographers of Newcastle, but is instead listed in the New Lambton section, as being on Gwydir Rd. (Note that Snowball’s property that contained his home and studio, stretched between Gwydir Rd and Clarence Rd, with the house facing Gwydir Rd and the studio backing on to Clarence Rd.)

Some idea of the time period that Snowball worked as a photographer can be gleaned from the handwritten labels he affixed to the front of his boxes of glass plate negatives. Many of these have been scanned and are available on the University of Newcastle Cultural Collections site.

I have compiled an index  of Snowball photograph box listings, ordered by box number and year. Note that there are two series of numberings. The first series begins in 1885 (box 2 in Oct 1885) and goes to box 349 in 1905. In 1906 Snowball began numbering boxes from 1 again, with box 7 in February 1906. The numbering of this second series is somewhat strange and not necessarily in date order. After 1906 the highest numbered box label I could find was box 139 in January 1910, but the latest date is box 55 in September 1912.

The earliest Snowball photo I can find in the University of Newcastle collection is of Thomas Croudace’s house, listed on the cover of box 2.

Links to Other Sites