This year marks 140 years of New Lambton Public School. It’s an anniversary that would have been celebrated a decade ago, if not for government inaction, squabbling colliery owners, and construction delays.

New Lambton began with a colliery in 1868, and within a year the newspaper reported that

“a good Public School will soon be required, there being now scores of children in the township.” (The Newcastle Chronicle, 16 Sep 1869)

Although the need was great, the government took no action until August 1875, when a deputation from New Lambton delivered a petition to the Minister for Education in Sydney, and a school was approved.

The New Lambton Colliery initially promised land for the school near Evescourt Rd and Victoria St, but nothing happened while the co-owners of the colliery, Alexander Brown and George Dibbs, engaged in a bitter dispute over control of the mine. After two years of fruitless waiting, the school committee asked for the present site north of Russell Rd, as it belonged to Lambton Colliery whose general manager Robert Morehead was known to be a generous supporter of public education.

A contract for construction was awarded to Edward Constable and the ceremonial laying of the foundation stone took place on 30 November 1878. With an expected construction time of ten months the stone was optimistically engraved with the year 1879. But delays due to contractor disputes and a scarcity of bricks meant that as 1879 drew to a close, the Newcastle Morning Herald reported, with a dose of dry humour:

“There is now no prospect of the Public School being ready for opening at Christmas. Many of the children in whose interest this school was first advocated, are now married, and have large families.”

Finally, on 2 March 1880, classes commenced for 270 children. The following Saturday over 400 people gathered for the opening ceremony, where it was remarked that

“the lack of this institution for years past has been so apparent as to make it appear strange that its erection was not an accomplished fact far earlier.”

The article above was first published in the February 2020 edition of The Local. 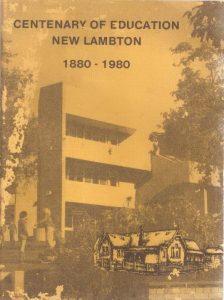 One of the sources I used in researching this article was the booklet produced by the school on the occasion of their centenary in 1980.

Although there was much helpful information in the booklet, there were a number of errors, in particular when describing the originally proposed site for the school.

The booklet quite correctly states that “The first site chosen was on ground owned by the New Lambton colliery.” This means that the site was south of Russell Rd, that road being the border between New Lambton and Lambton coal leases. The centenary booklet then states that the proposed site was “around the south-eastern section of St James Rd.” I have found no evidence to support that statement. Instead, we know that:

I can only guess that the authors of the centenary booklet incorrectly assumed that the eventual site for New Lambton South Public School (opened 1944) was the originally proposed site for the New Lambton school.

I have put together a separate page of other corrections of material contained in the centenary booklet.