A glance at any map of Lambton and New Lambton shows the area was never traced out in a grand design by a town planner. It grew haphazardly, and the strangely shaped streets abutting at odd angles forms not only a mosaic on the map but a mosaic in history. Each oddity has a story to tell.

One of the more curious stories is of Bridges Road, for in an 1893 map of the region produced by Major T. S. Parrott of the Engineer Corps Sydney, we see not a road, but a line marked “Unused Railway”. This was the rail line of the ill-fated Australasia Coal Company. Having obtained a coal lease in the Hillsborough area in 1873 they spent a vast sum of money building a railway to connect their mine to the port of Newcastle. In October 1877 the first trainload of coal was taken to the port, but within 18 months, as a result of spectacularly bad management, the company went bust and the rail line fell idle.

By 1894 it was clear that line would not be used again and the rails were removed. The rail corridor was released to New Lambton council in 1915, and by 1918 a short section of road was constructed south of Russell Road. Initially called South Greta Road, in 1919 it was renamed Bridges Road in honour of Major General William Throsby Bridges of the Australian Army, who was killed by sniper fire at Gallipoli in 1915.

Bridges Road was extended several times towards the south in the following years and revealed a surprise in 1962. When the Bridges Road-Northcott Drive underpass was excavated, workers found buried in the earthworks, still intact, the original 1887 wooden viaduct that carried the Great Northern Railway over the Australasian Coal Company’s line. An unexpected and long hidden reminder of the genesis of Bridges Road. 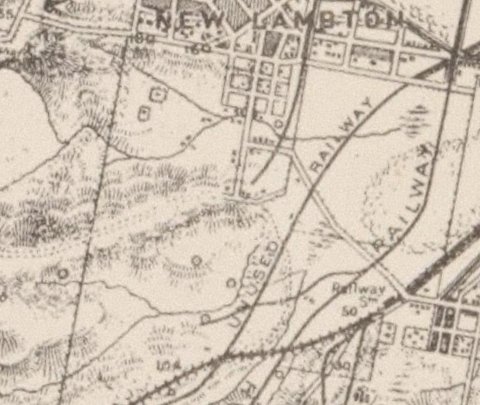 A portion of T.S. Parrott’s 1893 map of Newcastle, showing what is now Bridges Road as an unused colliery railway. National Library of Australia.

The article above was first published in the January 2017 edition of the Lambton & New Lambton Local. 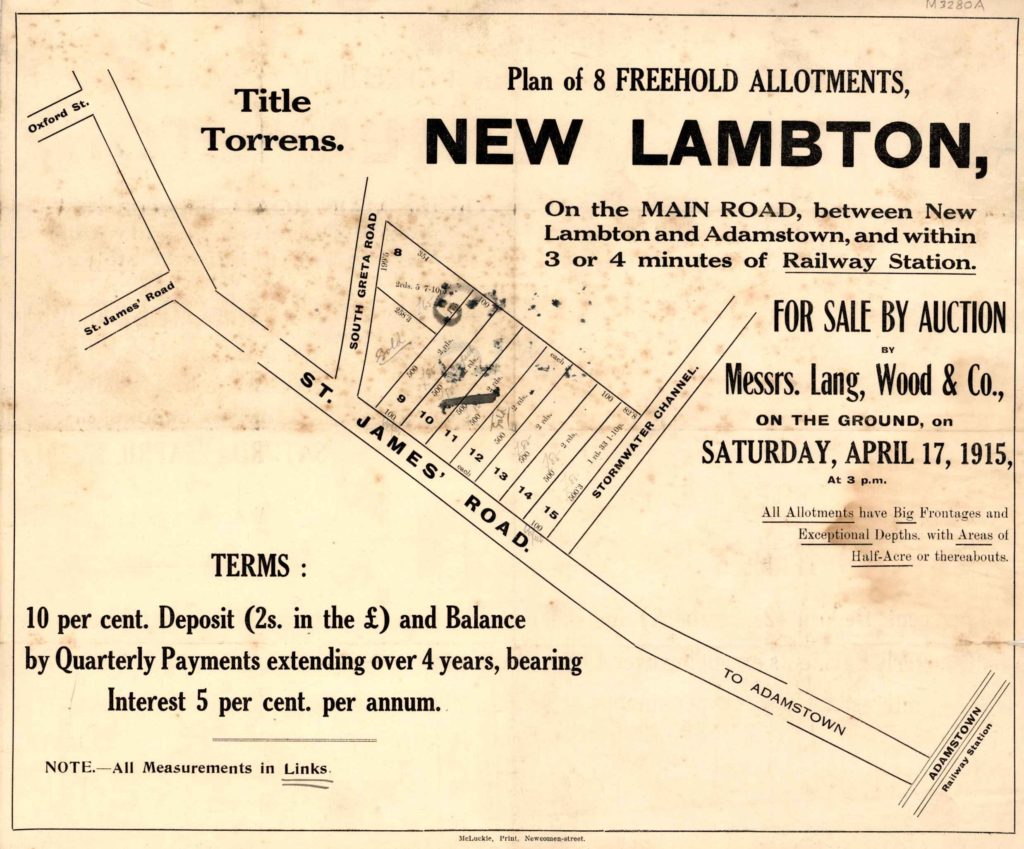 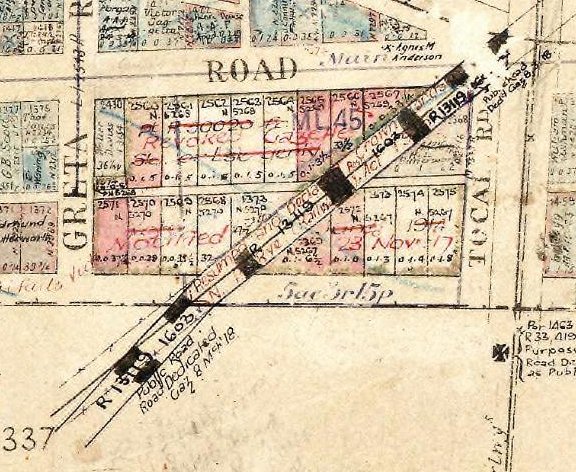 Map showing the northern most section of Bridges Rd, with an annotation regarding the gazetting of the road. R13119 – 1603. Public Road. Road Dedicated Gaz 8 Mch’18

This map is from the NSW Historical Land Records Viewer. 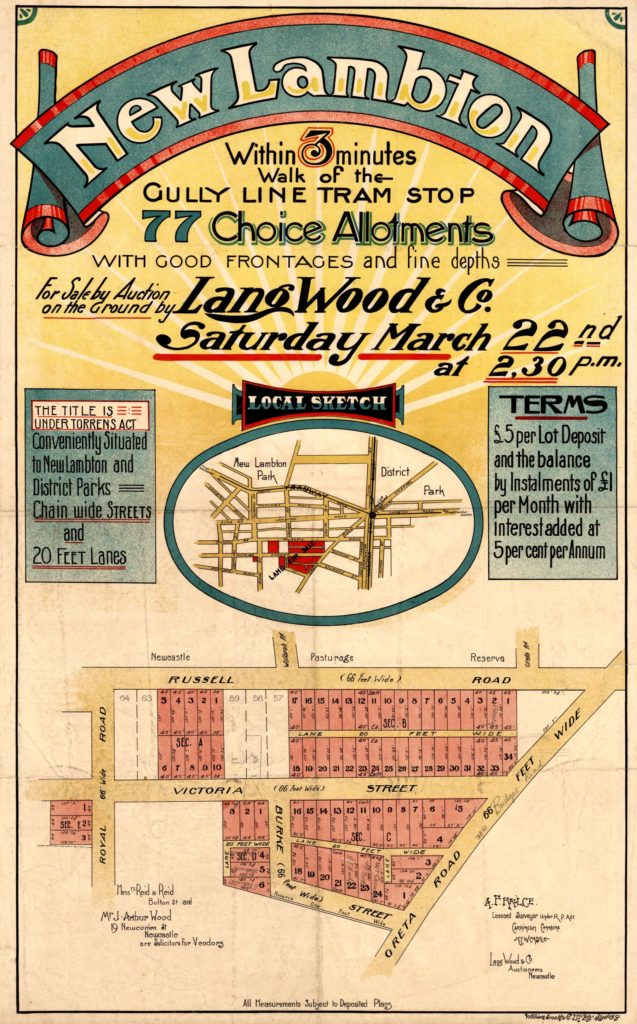 This 1919 real estate advertisement, shows “Greta Road”, at the time its was being renamed to “Bridges Road”. University of Newcastle, Cultural Collections. 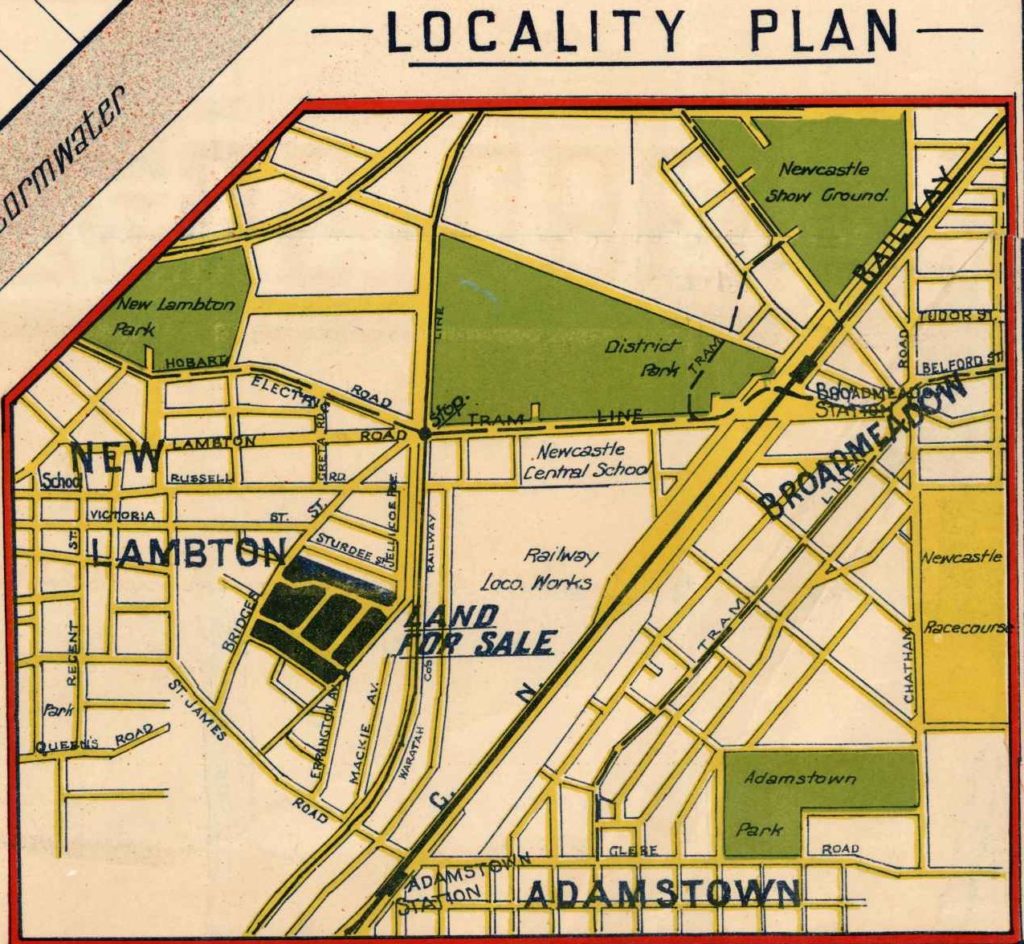 This locality plan from a 1925 real estate advertisement shows that Bridges Rd extended only as far as St James Rd, and that it was also known as Bridges Street. University of Newcastle, Cultural Collections.

This locality plan from a 1927 real estate advertisement shows that Bridges Rd was extended down to Henley Street. University of Newcastle, Cultural Collections.

In 1962, when excavating under the Great Northern Railway embankment in order to extend Bridges Road into Northcott Drive Kotara, the original viaduct bridge over the old Australasian Coal Company railway was rediscovered. J.F. Weber reported on this on page 161 of the September 1964 issue of “The Australian Railway Historical Society”.

Excavations for the Eastern abutment revealed heavy bridge timbers embedded in the embankment and puzzled engineers, on searching old plans, discovered that, at this exact spot, a viaduct of seven 26-feet timber openings had previous existed, being part of the original main-line construction. It had served as a flood opening, the second span being left clear for the possible revival of the Australasia Coal Company’s railway. It had existed until 1902, when the gap was closed by burying the viaduct in an embankment, as only a small opening was required for storm water. The old timbers, when excavated, were found to be still sound and in good condition, 61 years after burial and some 76 years after original erection.