We sometimes think of war memorials as edifices erected after a conflict, to honour the fallen. The Lambton Park Memorial Gates indicate a wider purpose, as evidenced in the name of the group who erected the gates – the Send-off and Welcome Home Committee.

The Great War had been fought for little over a year, when Henry Burg and Thomas Pease called a public meeting in September 1915, to form a committee to provide a “send-off to our boys for the front” and to welcome home wounded and invalided soldiers. The group resolved to present each enlisting soldier with an inscribed wallet on his departure, and a gold medal on his return.

At a farewell function in January 1917, Mayor Edward Charlton announced plans to “erect gates, as a Roll of Honour at the park.” With an estimated cost of £250, fundraising efforts ramped up. Dances, concerts, euchre parties, and sports days were held, mostly organised by the ladies on the committee, led by Mary Ott and Vera Darling. Plans for the gates progressed when Newcastle architect Eric G Yeomans agreed to be the honorary architect. 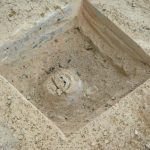 On 19 October 1918, a large crowd gathered in Lambton Park for the ceremonial laying of the foundation stone. Mr J Estell MP addressed the crowd, then placed into a bottle a parchment with the names of 39 members of the committee, “together with a copy of the Newcastle Morning Herald from August 1914, containing the proclamation of the war, and a number of old coins.” The bottle was sealed and placed into the cement foundation, over which the stone was laid. The Mayor then presented Mr Estell with an engraved gilt trowel.

The war ended just three weeks later. The gate pillars could now be engraved with a closing year, alongside the names of 140 soldiers from the district. Thanks to the efforts of the Lambton citizens, one hundred years on, we will remember them. 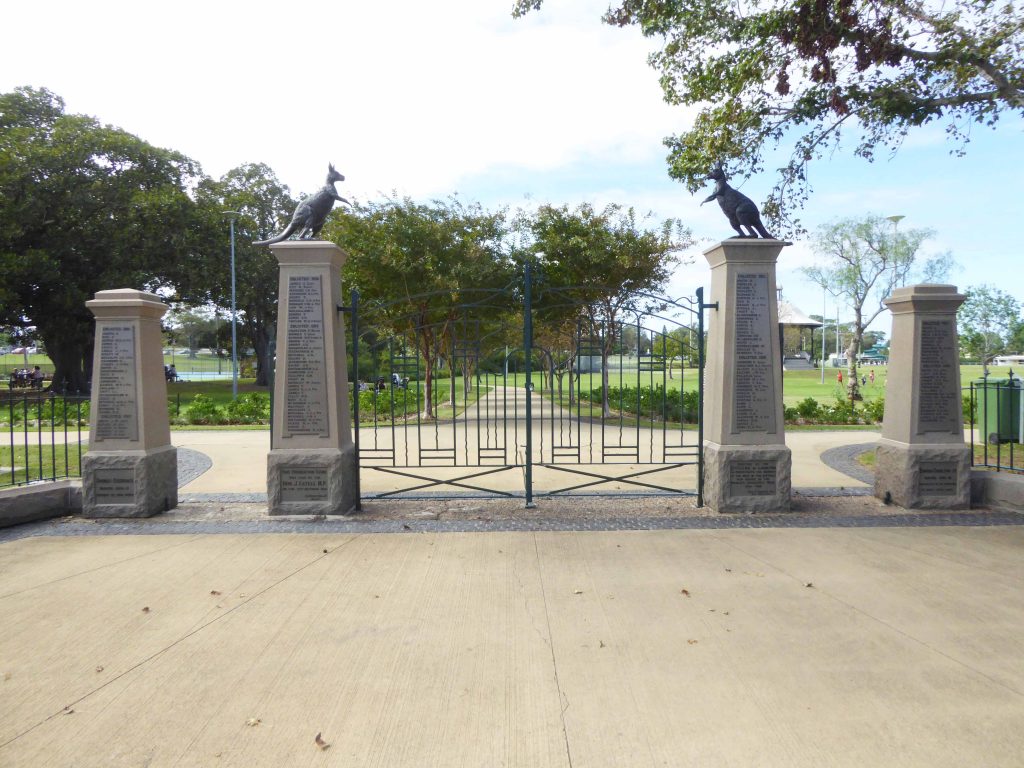 The ceremonial gilt trowel presented to J Estell at the laying of the foundation stone of the park gates. Photo courtesy of Estell family. 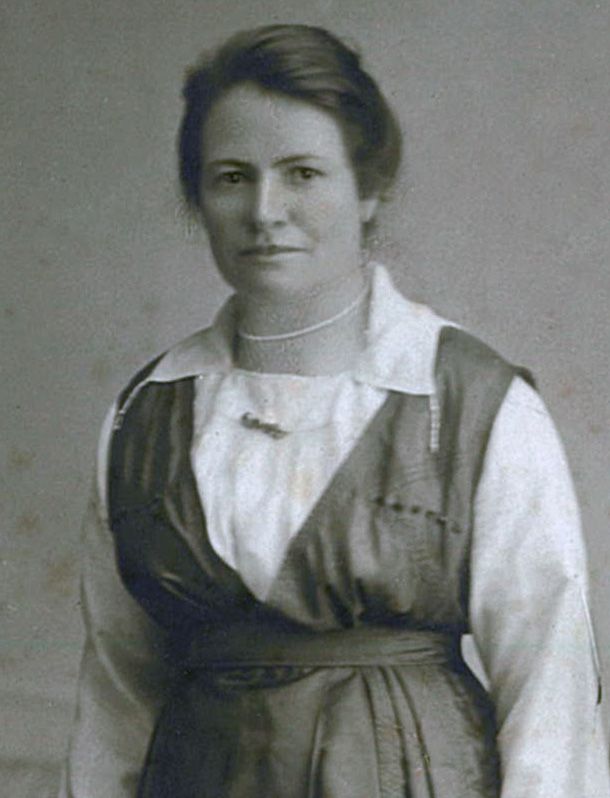 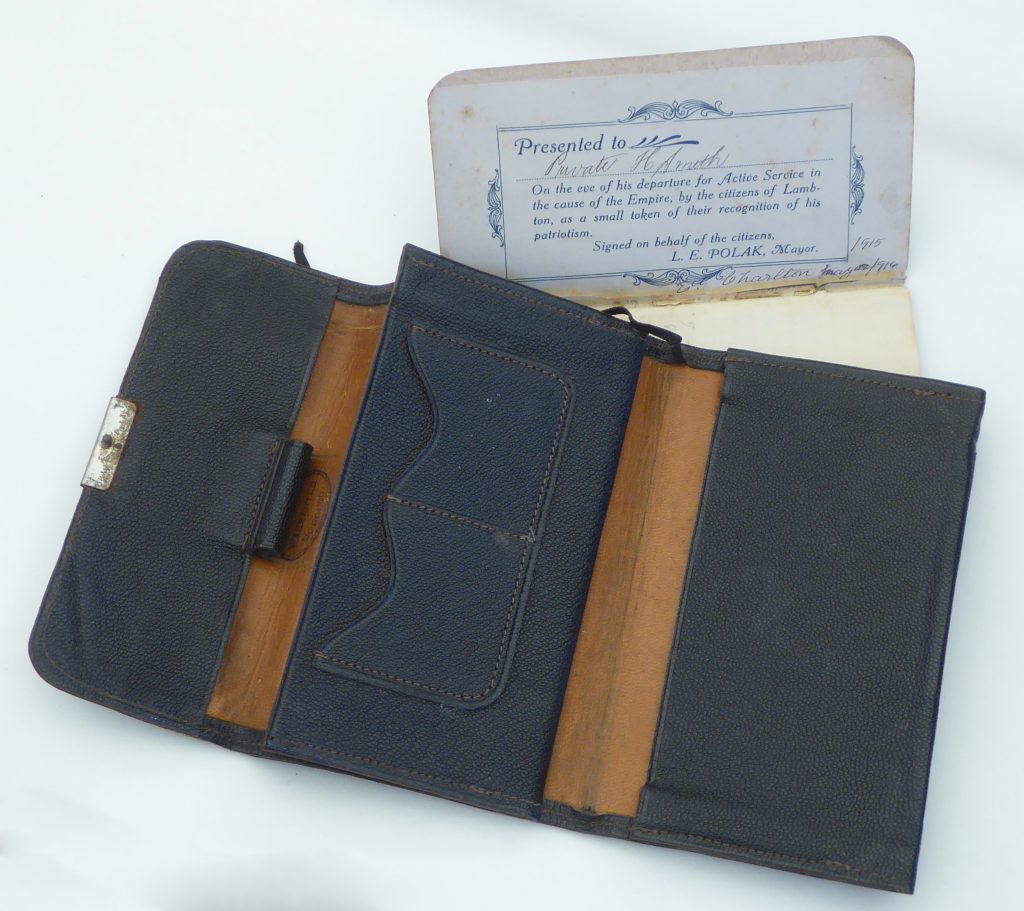 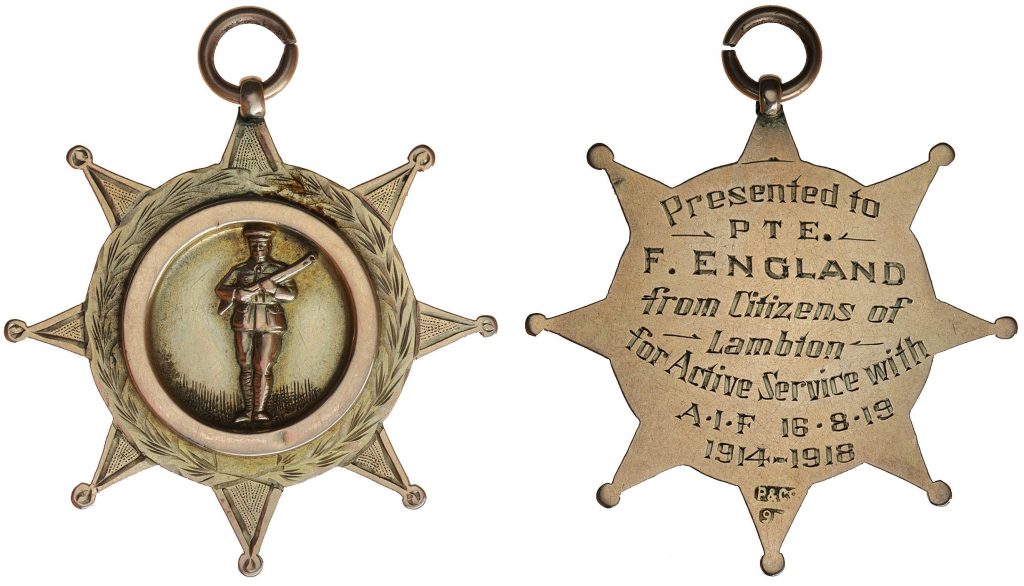 Medal presented to Private Frederick England from the citizens of Lambton. Photo courtesy of Noble Numismatics.

Names on the gates

There are 140 names inscribed on the four gate pillars. Soldiers who died in service are marked with an asterisk.  By using the resources of the Australian War Memorial and the National Archives of Australia I have been able to identify almost all the men and create a spreadsheet with relevant information on each soldier, including links to Honour Rolls, embarkation rolls, and service records.

In the process of compiling the spreadsheet I discovered a surprising number of errors in the gate inscriptions. There are over 30 errors such as