The ballot to elect the first aldermen took place on 7 August 1871, in the Mechanics’ Institute building on Howe St. 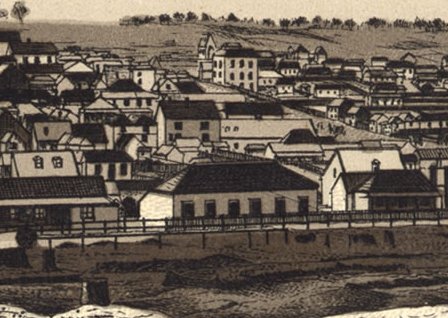 The long six windowed building in the foreground is the first Mechanics’ Institute building, in Howe St, Lambton. circa 1884. University of Newcastle, Cultural Collections.

The official declaration of the poll took place in the Mechanics’ Institute building on 8th August 1871, and was immediately followed by the first council meeting, whose sole business was electing Uriah Broom as Mayor. Immediately following the first meeting an inaugural supper was held …

At 7 o’clock a large number of gentlemen, consisting of the amalgamated successful and unsuccessful candidates and their guests, sat down in the long room of the Gold Miners’ Home Hotel, to a substantial supper provided by host Stoker.

The original Mechanics’ Institute building was located on Lots 5 and 6 of Section L, which correspond to 70 and 72 Howe St today. 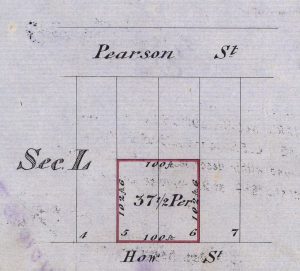 Site of the original Lambton Mechanics’ Institute, Lots 5 and 6 of Section L in Howe Street. Vol-Fol 149-124.

Mr Stoker’s “long room” was a large hall on the upper floor of the “Gold Miners’ Arms” hotel, on the north east corner of Elder and Grainger Streets. The second council meeting was held in this location on 15 August 1871. 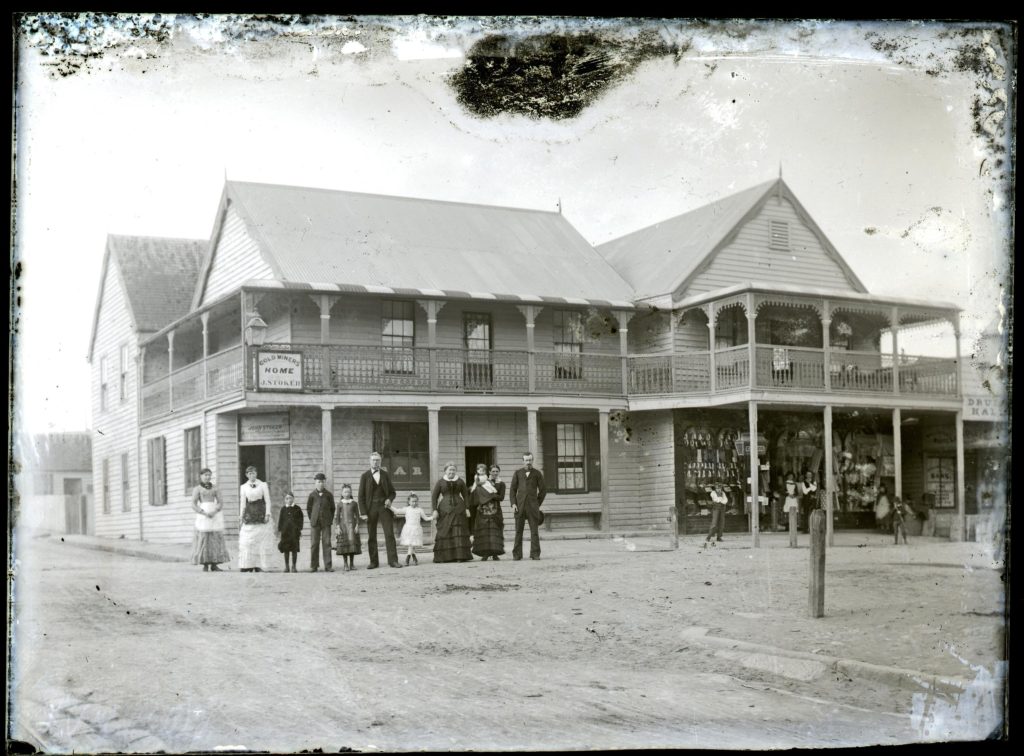 Council meetings were held in that location from 25 August 1871. The mention of Joseph Piper is probably an erroneous reference to Joseph Phippin (sometimes spelled Phippins, Phippen, Phiphen), as a later article reported that the council met in a variety of locations including,

… in Mr. Joseph Phippen’s dwelling-house, and subsequently in two other dwelling houses, and for years in a room over the dwelling of the late Mr. W. Maddock, in Elder-street.

Phippen’s house was on the north-east corner of Dickson and Grainger Streets. An article from 2 August 1873 reporting on street formation by the council reported that

The Corporation have finished Grainger-street up to Mr. Stoker’s hotel. It is to be hoped they will finish it up as far as the Council Chambers.

The location of Phippin’s residence being on the corner of Dickson and Grainger streets is confirmed in advertisements in 1879 when Phippin opened a Temperance Hotel on the site. Patronage of his temperance establishment must have been meagre, for just six months later, on 13 March 1880 Phippin announced the opening of the Northern Star Hotel on the site “with a choice stock of the best brands of Liquors, Ales, etc.”. 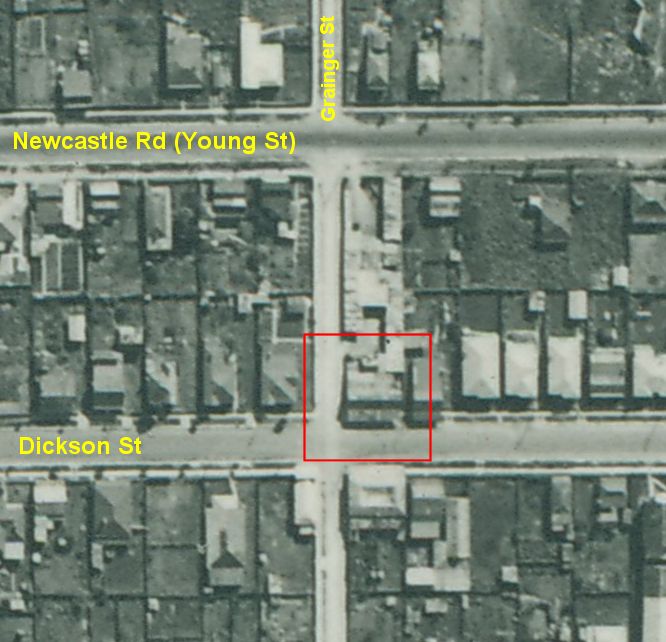 The former Northern Star Hotel building in a 1944 aerial photograph.

The building was used as a corner store from 1902 until about 1989, when it was sold and demolished, and a residential house built on the block. 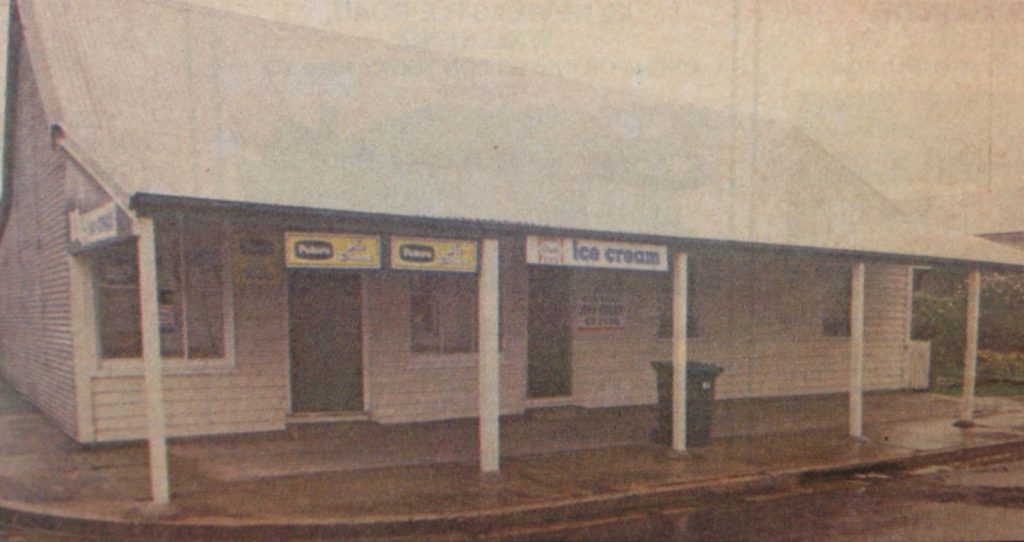 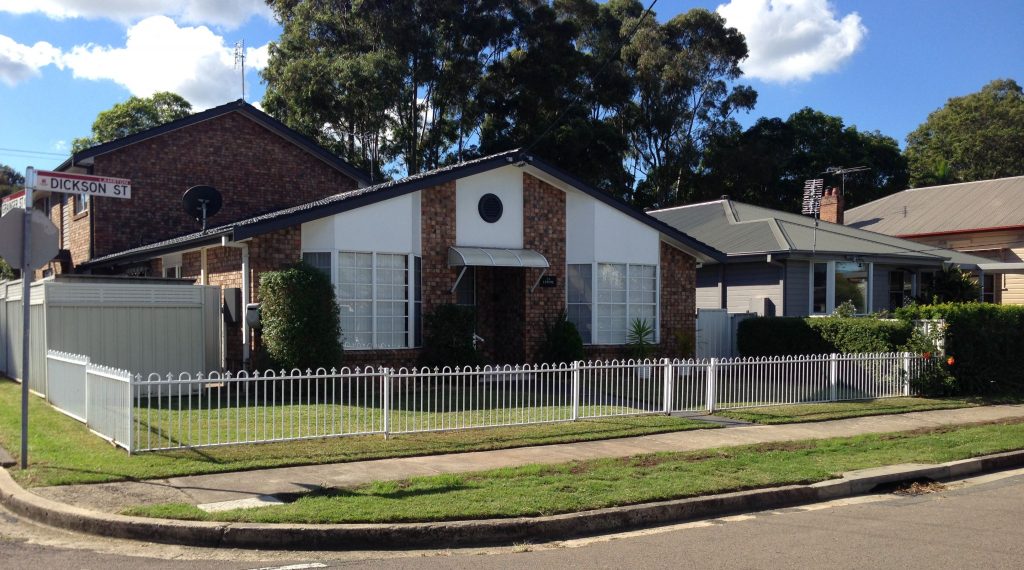 On 26 August 1873, Lambton Council received a letter from “Mr. Phiphen, landlord of the Council Chambers, giving the Council notice to quit the premises now occupied. Three months later Mayor William Lightfoot announced in the newspaper on 8 November 1873 that …

“NOTICE is hereby given, that after the 20th of November next ensuing, the Municipal Council Chambers will be REMOVED from Dixon-street to Mr. R. Jones’s premises, in Elder-street.” 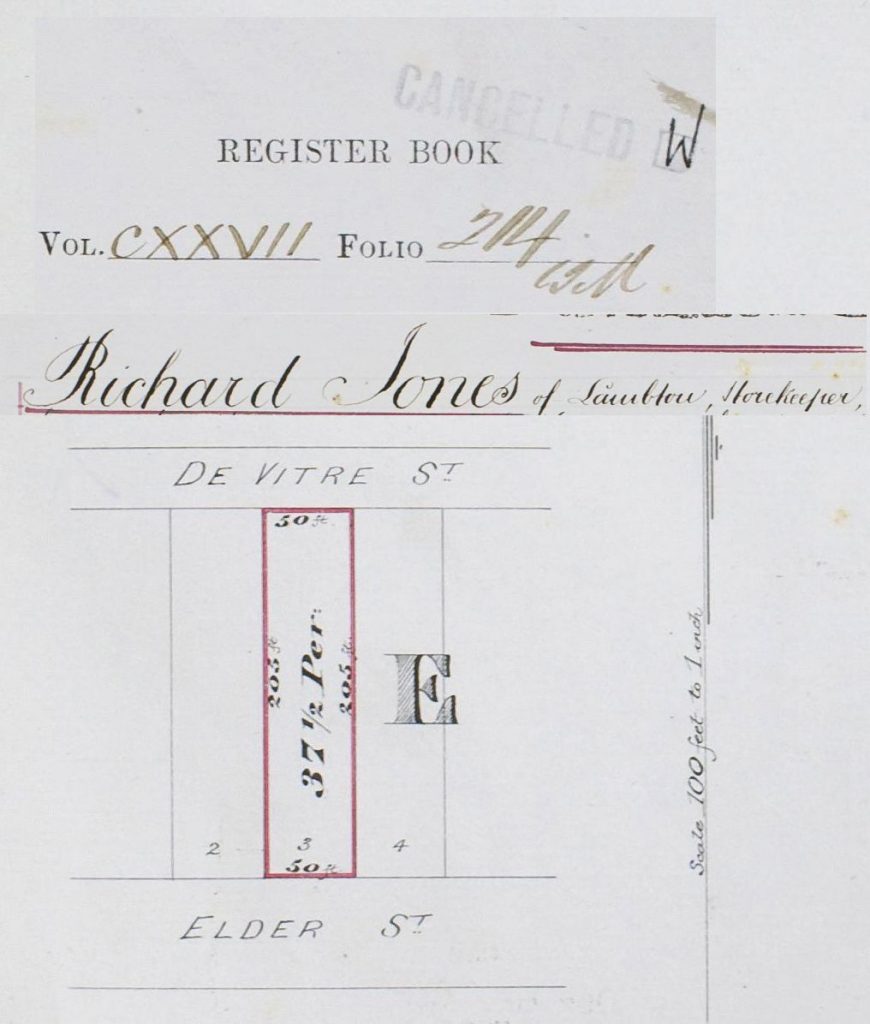 This block of land corresponds to 110 and 112 Elder St today. 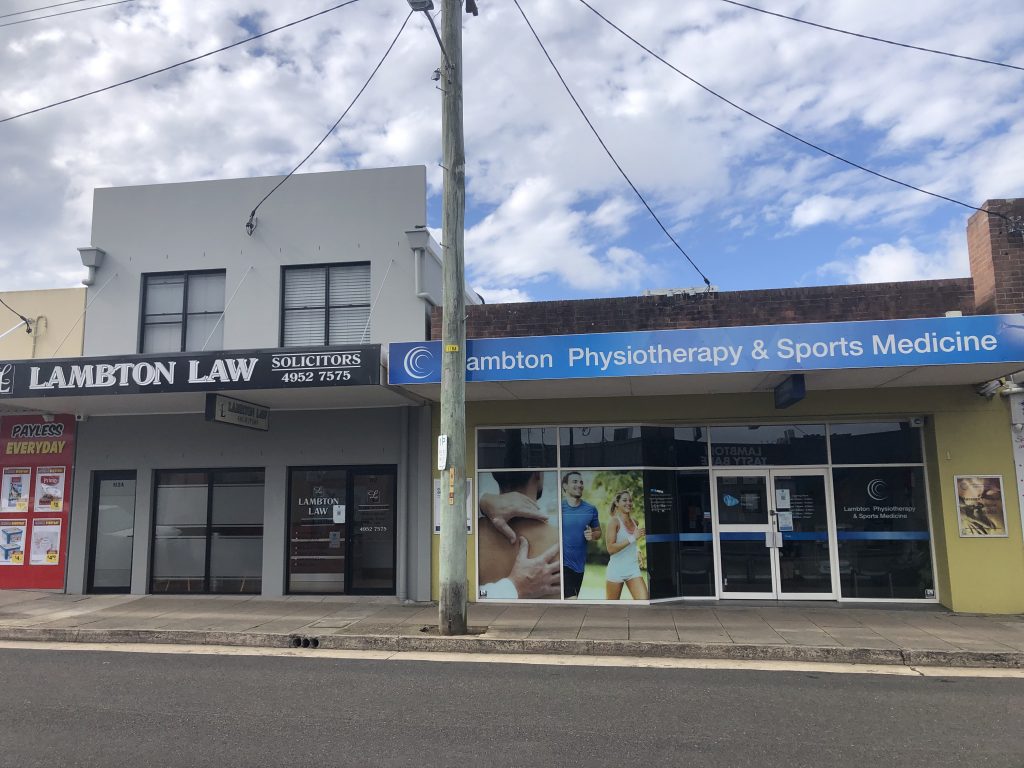 The Mayor was of opinion that it was time the Council was looking out for more suitable premises, as the present building was nothing but a pile of old paper and rags, and totally unfit for their purposes.

“That Aldermen Hindmarsh and Maddison be empowered to rent a place in Elder-street from Mr. Watkin Jenkins, for two years at 5s. per week, for the purpose of Council Chambers.”

Two weeks on 29 June 1876 later the newspaper reported that

“Our Municipal Council have shifted their quarters from the old premises to Mr. Maddock’s new building above the Telegraph Office. The office furniture, &c., were removed on Wednesday evening.”

“read a memorandum of agreement between the Council and Mr. W. Jenkins, for the renting of premises in Elder street, for Council Chambers, for a term of two years.”

Land Title records show that William Maddock owned Lot 3 of Section H in Elder St at the time, and there is no record of Watkin Jenkins owning land in Elder St. It would appear that the land and building was owned by William Maddock who leased it to Mr Jenkins, who then sub-leased the upper floor to the Council for use as chambers. 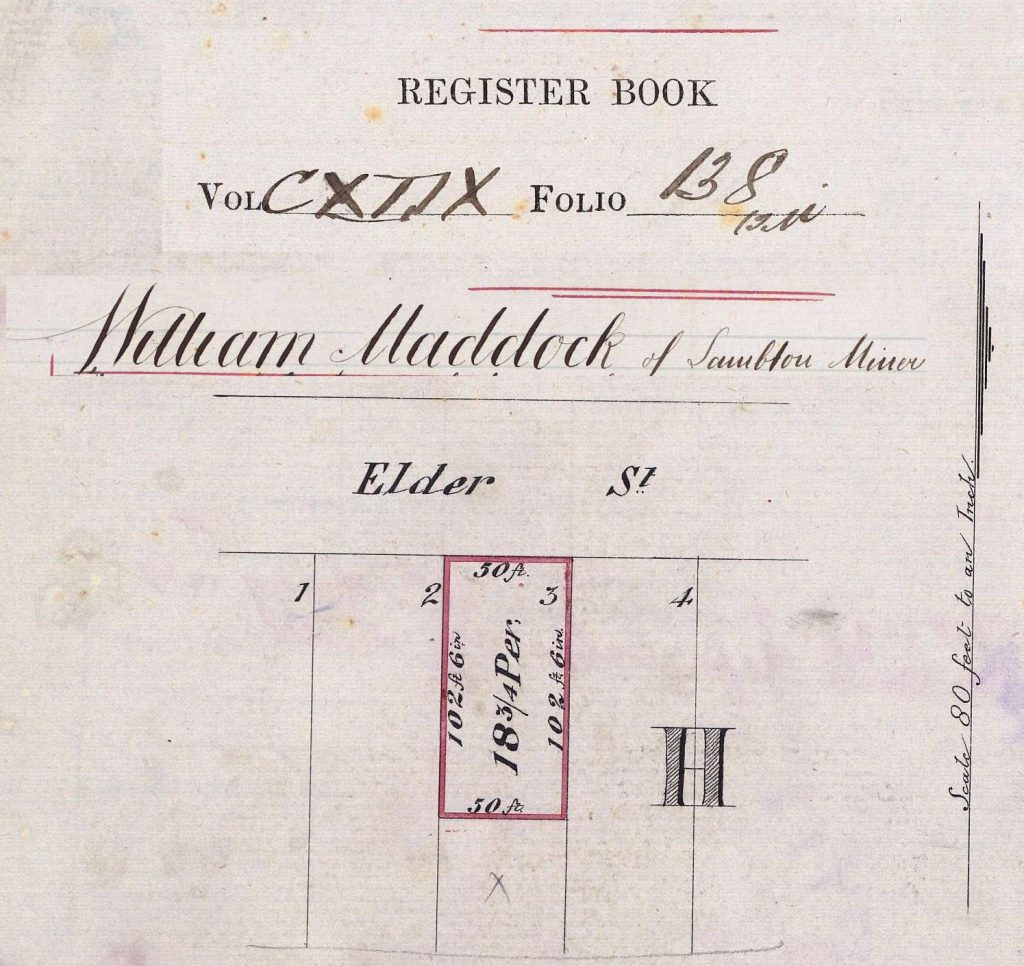 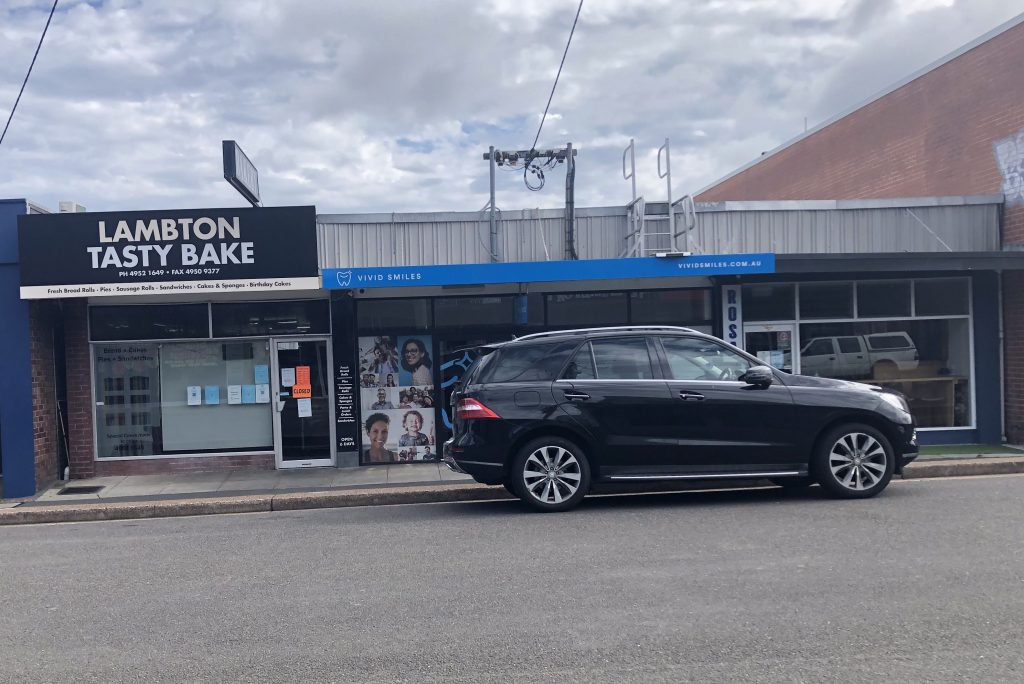 The fact that the council chambers were located in the upper floor of Maddock’ building is indicated in the report on the council meeting on 14 November 1876, when a motion on public support for the Fire Brigade was being discussed …

“The debate grew rather hot, and just in the middle of it a commotion was caused by a child of Alderman Maddocks (who is foreman of the Fire Brigade), singing out at the the foot of the Council Chambers stairs, “Daddy there’s a fire.” The whole of the aldermen, reporters, &c., rushed down the stairs, and found a stump burning out on the Commonage.”

The council was still meeting in Maddock’s builing in March 1881, and in the absence of any evidence of a subsequent move, it can only be presumed that council continued to meet there until they erected their own chambers in 1887.

In January 1872 the Council had applied to the Minister for Lands for a parcel of land at the eastern end of Dickson Street to erect municipal chambers. The request was granted and the Council estimated the probable cost of the chambers to be £200. Limited finances however meant that construction did not proceed, and the council continued to meet in rented premises. The Dickson Street site was eventually resumed by the government in 1884 to be used for the police barracks and lockup. This site corresponds with 22 Dickson St today. 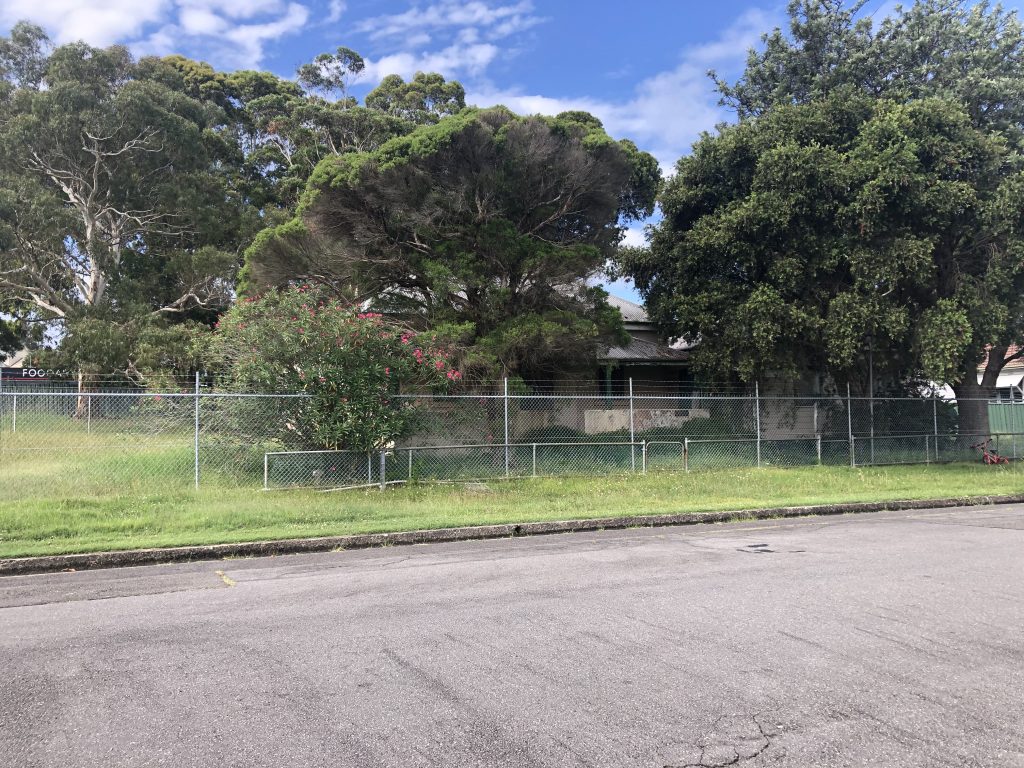 The push for new council chambers was renewed in 1887, when in a Lambton Council meeting on 8 March 1887 Alderman Kerr moved

“That plan and specification be prepared for a wooden building suitable for council-chambers, cost not to exceed £200.” He thought the time had arrived when they should have a better place of meeting. The present one was unsuitable and uncomfortable, and for the sake of the ratepayers and themselves they should have a better one. Alderman DENT seconded, and supported Alderman Kerr. The present building was a beastly place. When they looked around they saw the very walls in mourning, whether for the sins of the aldermen he knew not. He was favourable to a new building, and erecting it on the corner of the reserve facing Morehead street.

There was some debate in the ensuing weeks about the site for the new council chambers, and a special meeting was held on Thursday 24 March 1887 to decide the matter.

Alderman KERR moved that the site be selected on the North West corner of the Reserve, fronting Morehead Street and the extension of Elder Street. The area taken not to exceed 1 rood. Seconded by Alderman DENT and carried.

It was resolved that the Plan & Specification be left with Bennett & Yeomans who has undertaken to supervise the work 3% of cost of building. Thomas Grierson, Mayor. 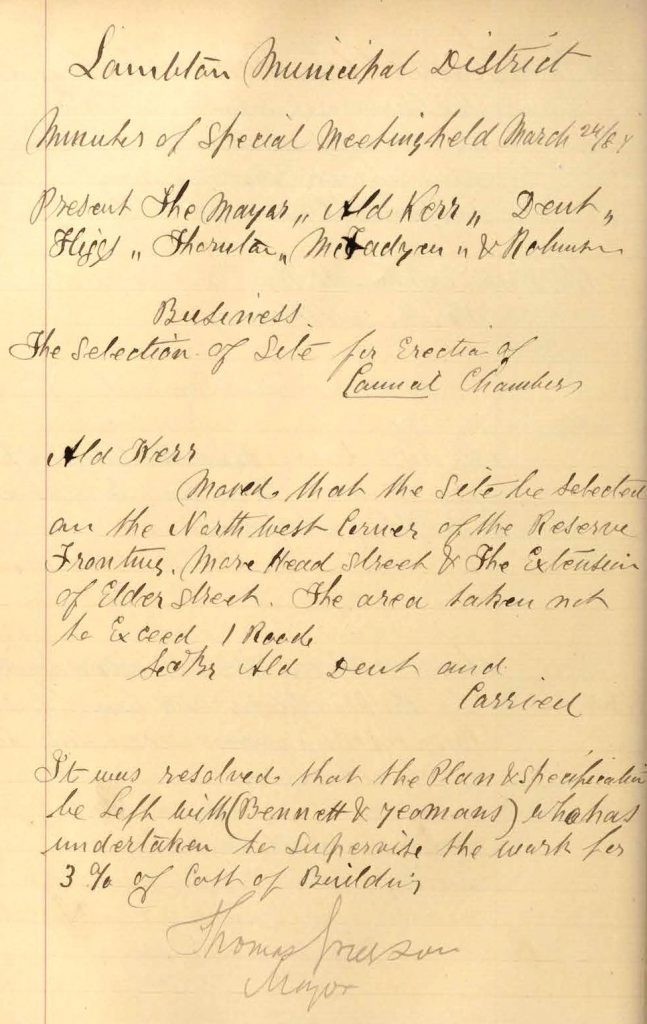 In a few short months a weatherboard building for the council chambers was constructed in the corner of Lambton Park. The building cost £270 and was formally opened on 21 July 1887. 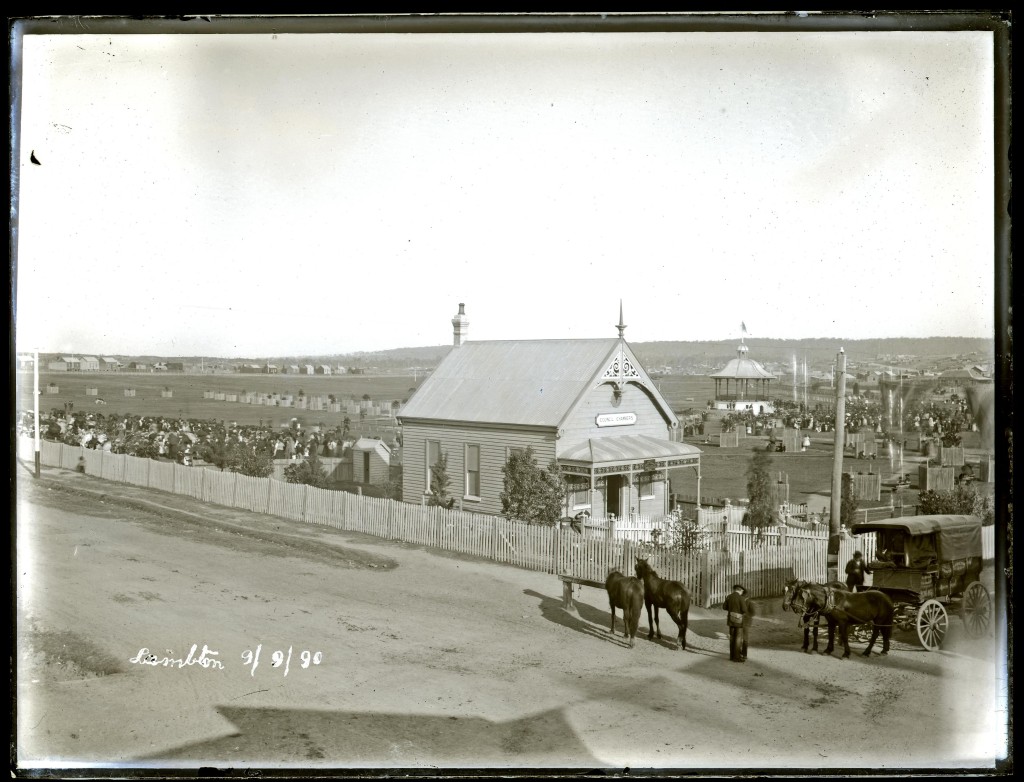 With the creation of the Greater Newcastle Council in 1938, the final meeting of Lambton Council took place in this building on 29 March 1938. 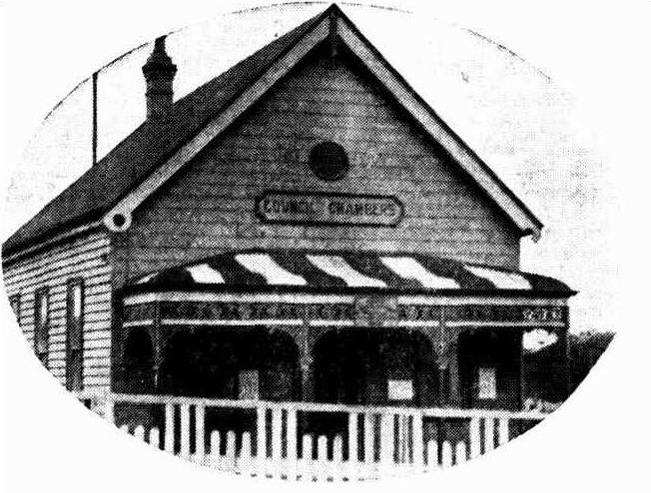 In 1892 the government gazetted a parcel of land as a site for a town hall. The site was a block of land on the north side of Elder St, which was split – the western half reserved for a town hall, and the new Mechanics’ Institute was built on the eastern half in 1894. The map below from 1906 shows the “Town Hall” site on the left on block 856, and the Mechanics’ Institute on the right on block 330. Note how the non-consecutive numbering gives a clue that the block was subdivided.

Unsurprisingly, given the bankruptcy of the council over the electric lighting scheme and its continuing financial indebtedness, there was never any possibility of building a new town hall. In 1910 there was some discussion in council about using the Elder St block of land for a public pound. In 1926 the town hall site was re-gazetted as a council depot and storage area. 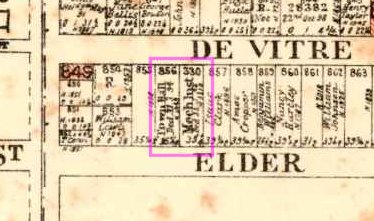 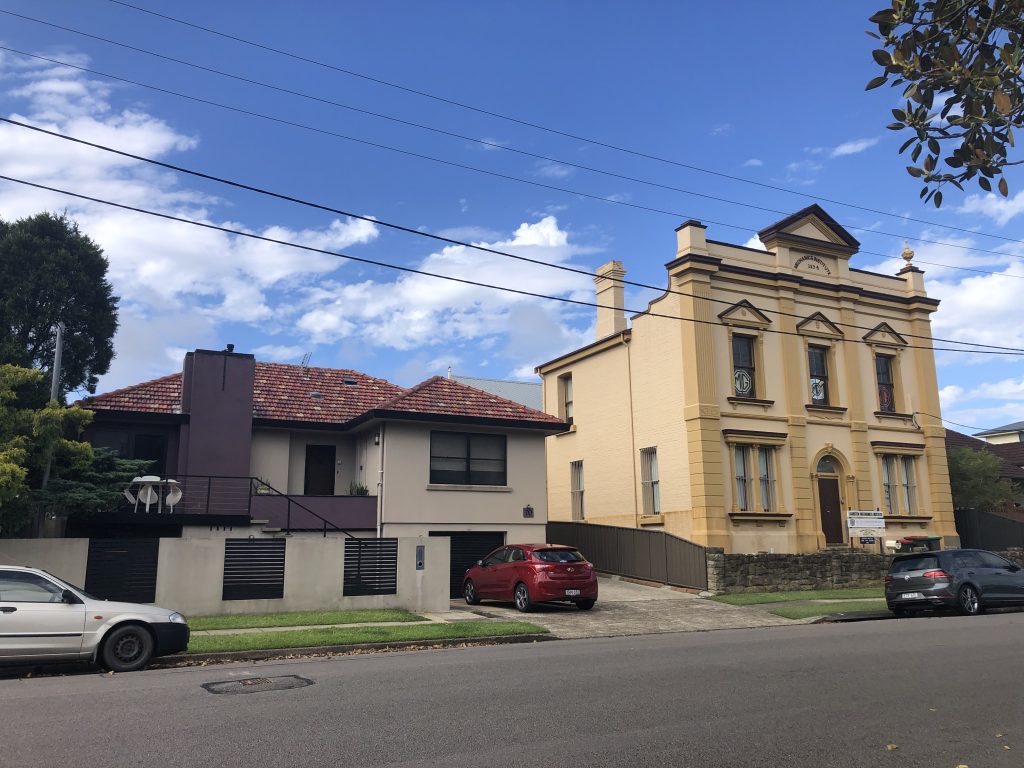 70 Elder St Lambton, adjacent to the Mechanics Institute was the proposed site of the Lambton Town Hall in 1892.

The council depot on the north side of Elder Street was sold off in 1940. In May 1942, the president of the Lambton Patriotic Committee (Mr. M. R. Blackwell) advised members …

… that permission had been granted for the use of Lambton Council Chambers as a recreation hall for soldiers. It was decided to name the hall as “The Lambton Citizens All Services Recreation Hall.”

The building became the Lambton branch library in February 1950, and continues to be used for this purpose to the present day. 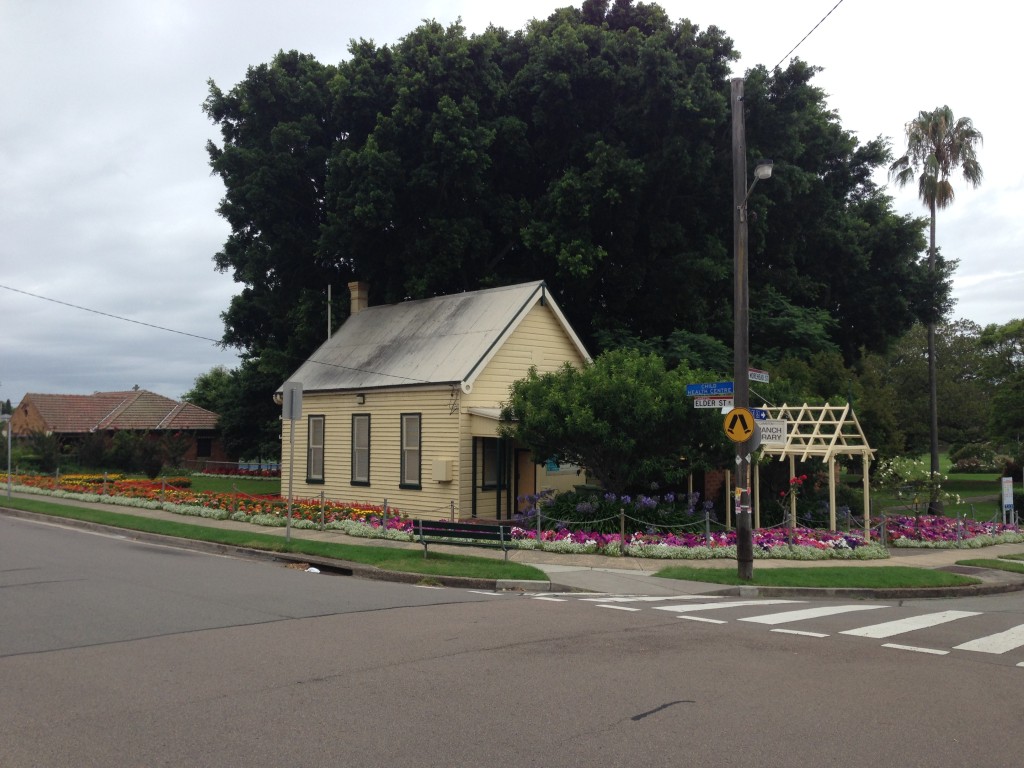 In 2021, Newcastle Council made renovations to the library building, including the erection of a bullnose verandah at the front, similar to the original verandah on the Council Chambers. 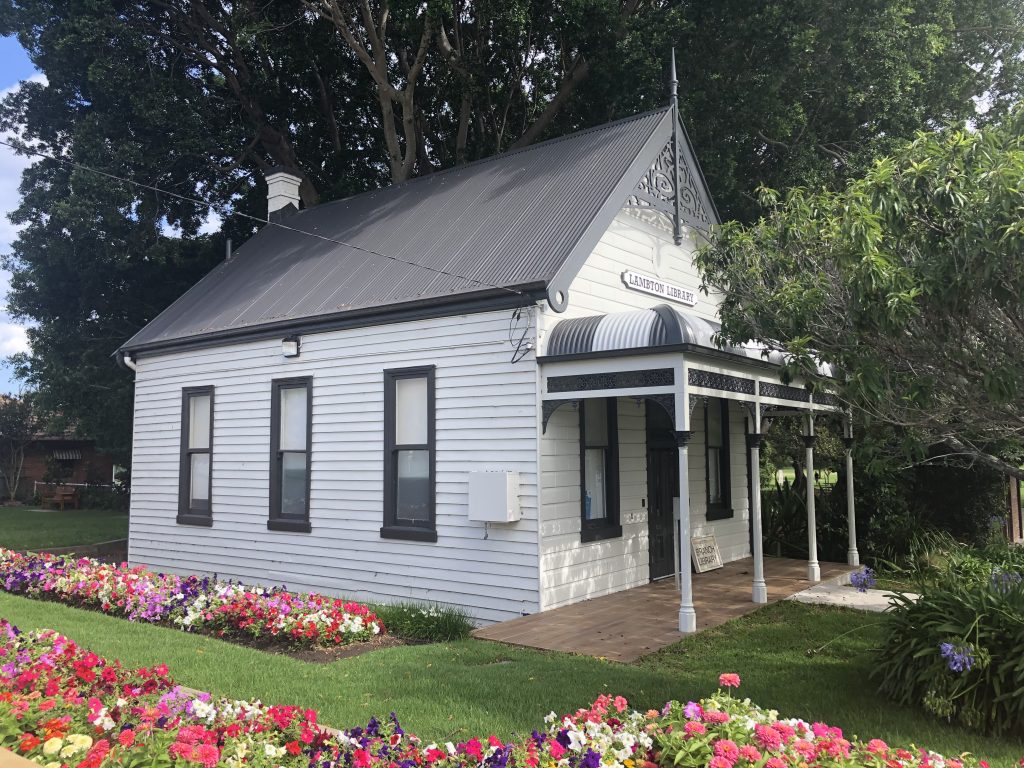