I got a brief 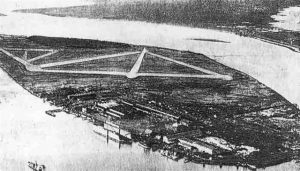 mention in Mike Scanlon’s Newcastle Herald history article in the Weekender section today (15 May 2021), referencing the research and blog post I had done on the Walsh Island aerodrome.

Sometimes the right words are hard to find.

Coon Island in Lake Macquarie has been in the news lately, with calls for its name to be changed given the overt derogatory nature of the current name. I wholeheartedly agree that changing the name is the right thing to do.

I had to look up where the island is located, which is at the northern point of land above Swansea.

I found an old Regional Charting Map in the Historical Land Records Viewer that shows the island.

[Note: I have expanded the content from this blog post into an article for the April 2021 edition of The Local.]

The Historical Lands Record Viewer is proving to be quite a useful tool in identifying the location of various old photographs. I have managed to confirm the location of this Ralph Snowball photograph of Thomas Bevan, Undertaker, as being at 41 Pearson St Lambton

Page 93 of the Federal Directory of Newcastle and District 1901, lists “T. Bevan” as an undertaker in Pearson St. Vol-Fol 796-107 shows that Thomas Bevan purchased the north half of Lot 6 Section K in July 1889.

In the 1904 photographic panorama of Lambton, taken from the North Lambton hill, Bevan’s house and shed can be seen in Pearson St.

In May 1910, the following advertisement appeared in Newcastle Morning Herald and Miners’ Advocate.

Property No 1 was the double storey house formerly owned by W T Dent, located at 18 Pearson St. Thomas and Jennet Bevan purchased the property in June 1908. (See Vol-Fol 262-127.) Although advertised for sale in 1910, the property was not sold until October 1919.

Property No 2 in the advertisement was the house and undertaker’s business at 41 Pearson St Lambton. The property sold to William James Hanlon, a blacksmith’s assistant, in July 1910.

Today Facebook blocked news content from its platform in Australia. This wholesale eviction of content from professional journalists, after years of intentional inaction on stamping out the spread of lies and falsehoods, simply makes explicit Facebook’s long held aim of being the premier purveyor of misinformation in the chase for clicks and ad revenue.

My hope, and I know it is a forlorn one, is that people will dump Facebook in droves, and turn to other sources and providers who don’t bully their users in order to get their own way.

Whoever says to the guilty, “You are innocent,” will be cursed by peoples and denounced by nations.