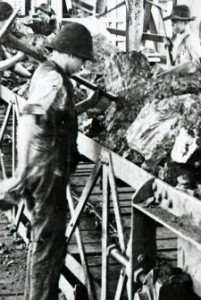 While investigating the local history of Lambton recently, I’ve been digging around a quite a bit in Trove’s newspaper archives. In doing so I’ve often been struck by how much some things have changed, and yet other things, have changed not at all.

In the changed ‘lots’ camp is the practice of sending 13 year old boys to work extraordinary long hours in the coal mines:

“The 4 boys who drive the horses that take away the coal in loaded skips, leave home shortly after five o’clock a.m., as they must proceed … to get yoked up by the time the bell rings at six o’clock, when work commences, …  and keeps, on till  six o’clock, when the day’s work is concluded for all hands, and the boys … deliver  up their horses to the horse-keeper — getting  home by about seven o’clock, thus having been absent nearly fourteen hours, and working continuously eleven hours”

Anyway, in the changes ‘none at all’ camp is the subject of Novocastrian opinion of the Sydney based government spending, with one local alderman complaining …

” … the broken promises of the Government were simply disgraceful. Many months ago Mr. Goodchap had promised that tenders should be called for within a month, but nothing had yet been done. … He  objected to the principle of spending money in large amounts in and about Sydney, and refusing to do the same thing for Newcastle and the surrounding districts.”

Yep. That was written 130 years ago, not last year.