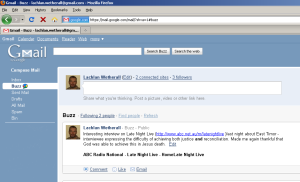 Thanks to TimeSnapper, this image captures the moment just after posting my 3rd Google Buzz entry.

Five years ago today I opened my gmail and found an extra link under the Inbox labelled “Buzz”, Google’s new social media platform. In a poor attempt at ironic humour I posted a comment on Buzz about the irrelevance of Buzz, and two days later another post about how I didn’t “get” or like Buzz.

But in the ensuing weeks, the accessibility of that Buzz link, sitting just one click away from my Inbox lured me in and I started using Google Buzz to post my random thoughts and observations on the oddities of life.

Less than two years later, Google itself decided it didn’t “get” or like Buzz, and they shut it down, so I migrated on over to Google+ to continue my random blurtings.

My postings to Google+ lasted for eighteen months, but I never really liked Google+, it was a few extra steps away from the Inbox, and I was beginning to be frustrated by the lack of formatting options. Also I was continually irked by a changing interface and Google’s insistence of foisting upon me in the “What’s Hot” section, the predilections of a billion people who were not like me. So in June 2013, this WordPress based website was born.

So five years and 391 Buzz/Google+/Wordpress postings later, here I am. But why am I here? I know (because I measure it) that the readership of this blog is a very, very close approximation to zero. So why do I do it? There are a number of different reasons, why I post various kinds of content, but the overriding reason is because I enjoy it. I enjoy the challenge of stringing words together to make something readable. I enjoy the challenge of watching out for the absurdities of life and human behaviour to comment on. I enjoy the challenge of snapping an unusual and opportunistic photo of the everyday things of life that highlights the beauty around us. I enjoy posting content that I think other people may find useful, even if it’s only one person.

In a way, this blog is also my own little private rebellion against the social media madness of our world that promulgates the lie that something has to be retweeted, hashtagged, liked and linked to death, for it to be meaningful, or worth doing.

So to end this little introspection on my five year blogging adventure, do I have a favourite post over that time? Yes, my observation in July 2010 that swapping the staff of “A Current Affair” with “Australia’s Funniest Home Videos” would instantly result in ACA having more credible and competent journalism, and “Australia’s Funniest Home Videos” becoming more humorous. As true today as it ever was.