In an attempt to channel the spirit of Daniel Bowen, after 4 days in Brisbane using the TransLink public transport system, here are my thoughts …

Knowing in advance that I would need to use public transport in Brisbane for 4 days, I applied online for a ‘go Gard’ to be mailed to me and was somewhat surprised to find that the delivery date was “up to 10 business days”. The card arrived after 6 business days, which makes it not so much a ‘go’ Card, more of a ‘coming eventually’ Card. 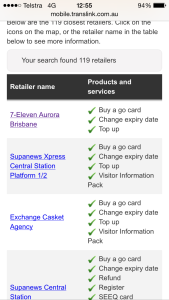 When it came time to top up my credit on the go Card while I was in the city, I used the TransLink mobile site on my phone to search for top up locations, and found that more choice is not always a good thing. The site listed 119 top up locations ‘near me’ – but with no way of distinguishing the location a few metres from where I was standing, from a location halfway across the city.

When I did try to top-up at a seven-eleven store I was told something to the effect that their terminal was offline and that I’d have to wait 5 minutes for it to start up.

Abandoning that attempt to top-up I wandered over to Central Station to try and top up at the kiosks at the station, where I found an excellent example of how not to design a ticket kiosk.

Being in Brisbane for only 4 days, means that I want to minimise the amount of unused credit at the end of my time here. So later in the week, after working out what my movements would be I calculated that I would need an additional $10 credit on the card. This time I thought I’d try to top up online. There were only two problems with this. Firstly the website rather ambiguously says that the top up “may take 48 hours to appear on your account summary” – does that mean that the top up might not be usable for up to 48 hours, or that the top up is usable immediately, but just not visible in your account? I have no idea. 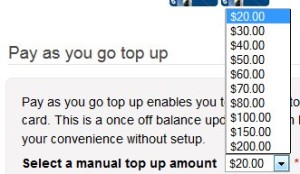 The second problem with the online top up is that the minimum top up amount is $20. But I only want to add $10 !

OK, so its back to the Kiosk machines at the Central station where I noticed earlier in the week that the minmum top up amount was $5. Arriving there I noted that some machines were saying “Cash only” and others advertising “Cash and EFTPOS” – since I only had $50 note on me I chose an EFTPOS enabled kiosk and got all the way through to entering the card PIN when the machine had an “EFTPOS failure” and cancelled the transaction. The person next to me had the same problem, so I suspect there was a communication link failure affecting all the machines. At that point I realised that I had enough 2$ coins on me to do a $10 top up, and there was coin slot right there next to the notes slot, so I tried again – but this time the kiosk informed me that a cash top up can only be done with notes – not coins. What sort of kioskian coinist discrimination is this! Aarghhh!!!.

The eventual solution was to go and buy a coffee with my $50 note, specifically ask for a $10 note in my change, and then come back to the station kiosk to get my $10 top up done.

All in all, I’m not very impressed with the go Card experience. On the plus side, when it comes to the actual act of using the public transport system I found the buses to be new, clean, well maintained, regular, with lots of bus lanes in the city.

And finally, in the “its obvious once you know it but not obvious beforehand” category …