As I mentioned in a previous post, since upgrading my iPhone 5 to iOS 7, synchronising using iTunes has become really buggy. Try googling “itunes sync hangs waiting for changes to be applied” and you’ll see I’m not alone. 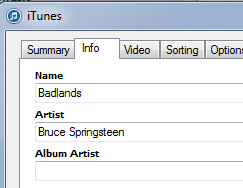 Also on random occasions, the sync process seems to hang at the “waiting for changes to be applied step” and then after about 20 minutes want to re-sync thousands of my songs to the iPhone for no apparent reason.